The Sounds of Anti-Anti-Essentialism: Listening to Black Consciousness in the Classroom

In teaching the many interrelated and complicated aspects of the Civil Rights movement, Black Power, and the Black Arts Movement, the challenge for me is to help students understand the “facts” of this period, and to simultaneously destabilize the teleological historical narrative these “facts” seem to suggest.  In a pedagogical context, sound helps fill in the gaps that fall outside of the knowledge produced–and contained within–certain archival accounts of black cultural and political history. While crucial, having students listen to the gaps, can be daunting, especially in our current historical moment, as the decades-long push against identity politics has been solidified by the recent (re)election of the nation’s first black president, Barack Obama.  This point demands more elaboration than I can provide here, but the critical pedagogical issue it raises within the province of black studies, is that it is becoming increasingly difficult to consider black political culture outside of the sedimented lines of American pluralism and black radical thought.

I use sound as a pedagogical tool to help outline a middle ground–what Frantz Fanon refers to in The Wretched of the Earth as “zone of hidden fluctuation” (166)–based upon articulations of resistance and identity that refuse to be frozen in time.  Building on Paul Gilroy’s conceptualization of anti-anti-essentialism in The Black Atlantic, an idea of black consciousness that is flexible and moves between the insufficient terms of “essentialist” and “anti-essentialist,” I use specific pedagogical examples to suggest that teaching about race and sound is a rich, evolving, and productively interactive continuum.   The auditory sense opens up new terrains of knowledge and dynamically expands the possibilities for students to think through the intricate and multifaceted formations of black consciousness during the volatile years of the 1960s and the resonance of those years in our present.

The recorded presence of Martin Luther King, Jr., for example, represents an important aural site for engaging in reflexive pedagogy, because King’s tonality–the resonance of his voice–creates a certain familiarity and is pivotal to the construction of the American myth of the radical transformation of the civil rights movement and the idea of post-civil rights racial equality.  For many students, King’s sound signals the dream of, and the pathway towards, a unified America.  Conscious of how this idea of King reflects a linear understanding of civil rights as simply a desire for inclusion, I direct students’ attention to the sound of King’s last recorded speech in Memphis on April 3, 1968.  Given the evening before his assassination, this speech resounds with King’s deepening critical perspective on black struggle through its haunting concluding notes. I point out to my classes that King’s final years (1965-1968) were marked by his increasing focus on ideas of black resistance outside of the Civil Rights mainstream, including his  critique of U.S. involvement in the Vietnam War, and his radical rethinking of the possibilities for black economic and political self-determination. 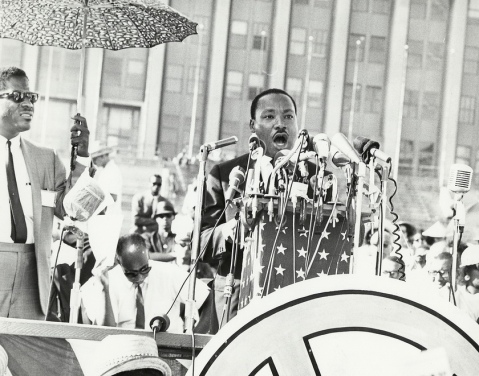 Centered on the economic injustice and dehumanization of Memphis’s striking black sanitation workers, King’s speech details the need for the Memphis black community do more than simply boycott municipal entities, but rather articulate their resistance by boycotting prominent national brands such as Wonder Bread and Coca-Cola.  Against this background, I play segments (particularly the final minutes) of King’s speech, entitled, “I’ve Been to the Mountaintop.”

The acoustic dimensions of King’s final speech resonate with a social and political complexity that troubles the sonic memories many students have of King’s “I Have a Dream” speech, delivered on the steps of the Lincoln Memorial in 1963.  The much more intimate and less overtly majestic soundscape of Memphis’ Mason Temple underlines King’s shift from national icon back to local, community activist.  The frequent audience shifts–applause, extemporaneous interjections, and silence–create a reverberating sonic energy that accumulates throughout the speech.  Rather than relying strictly on a call-and-response interpretation of the interactive exchanges between King’s voice and the audience’s response, I have students consider the non-linear ebbs and flows in King’s sound in this latest of moments (as Fred Moten would say, the totality of King’s tonality). For example, as King’s audience considers the weight of his analyses and what it means to articulate black resistance as “a dangerous unselfishness” that “puts pressure where it really hurts,” I identify moments of uncertainty, hesitation, and contemplative reflection that mark a non-linear interactive sonority between King and his audience.

Listening to King’s final thoughts offers a disturbing and disruptive emphasis on the stakes of breaking with entrenched modes of activist thinking. He concludes the speech with a series of prophetic thoughts on mortality as a cost of making a stand against “our sick white brothers.”  Set within the historical and ideological context I have sketched above, the delivery distinguishes the sound of King’s words.  As we listen I draw attention to King’s expression of a lack of fear in anything, any man, as King seems to convey an eerie foreknowledge of his murder and his irreverence in its face.

The apocalyptic sound of King’s concluding notes to this political sermon leaves much to contemplate.  From the mention of the potential threat posed to his life by “our sick white brothers,” through the speech’s last line, there is a tonal, timbral shift in his voice and demeanor. Through sound and posture, and the reaction of the audience to those factors, King’s affect seems to convey something more momentous occurring beneath the event’s surface dynamics.  King projects a confrontational edge through the sound of fearlessness in the face of mortality.  Did he know he was going to be killed shortly after giving this speech?  It’s a question that the peculiar tonality of his concluding lines raises for students.  If so, what does it mean to use the sermon as a site of prophetic, aural documentation of the fact that a force of transformation exists beyond the flesh and blood of leadership, a force that assassination can’t kill?  In the speech’s final synesthetic moment, I have the students listen and watch the shift that occurs in King’s demeanor as he closes, and the way that this shift culminates in an almost ecstatic moment as he delivers the final line: “Mine eyes have seen the glory of the coming of the Lord.” His defiant turning away from the microphone is crucial as it amplifies the meaning of the voice, letting those watching know that, much like an emcee, King has just “served” white power with a delivery that will outlast the sniper’s bullet the following evening.

I want to briefly point to two other examples that show additional ways in which sound complicates ideas of racial identity and expression during the 1960s.  When I teach Nina Simone’s composition, “Mississippi Goddamn,” (recorded live at Carnegie Hall in 1964), I ask students to consider the relationship between the distinctive sound of her voice and the ironic and critical elements of her lyrical meaning as this interaction creates a complex idea of radical black consciousness.  Composed in the aftermath of the murder of Medgar Evers and the bombing of the 16th Street Baptist Church in Birmingham, Alabama, Simone offers a musical, and more broadly sonic meditation on white supremacy.

Most students find the timbre of Simone’s voice, its grain (as Roland Barthes would say) and depth, immediately striking.  Her unique sonority and its context, greatly influence attempts by students to understand her reference to the song as simply a tune: “The name of this tune is Mississippi Goddamn” she says, and “This is a show tune, but the show for it hasn’t been written yet.”  Clearly it isn’t simply a tune, and the caustic quality of lines such as, “Oh but this country is full of lies/ You’re all gonna die and die like flies,” creates a critical depth through the sound of Simone’s commitment to a black radical perspective.  What does it mean, for instance, that Simone projects such sarcasm and biting critique to a predominately white audience at Carnegie Hall?  How might we hear the specific grain of her voice in this setting?  How does Simone’s projection of critical black sonic resistance, emerge at the conjuncture of anti-black racism and the beginning of legislative efforts under the Johnson administration to rectify racial inequality through civil rights bills?  What can be taken from the simultaneity and contrast that Simone projects her sound within?  I pose such questions to my students as a way of considering what it means to be committed to critical thought and social transformation that falls outside of the dominant lines of American national consciousness, and how the sound of such commitment, heard in the pitch and tenor of Simone’s voice, matters as a different kind of historical documentation.

In considering how the sound of music can offer an intervention within the formation of black political consciousness in the Black Arts Movement, I often use the 1966 recording of Amiri Baraka’s signal poem, “Black Art,” as it set to the experimental musical sounds of Sonny Murray’s ensemble (Murray-drums, Albert Ayler-tenor saxophone, Don Cherry-trumpet, Henry Grimes, Lewis Worrell-bass).  Having first read the poem, students then are able to hear it set to– and against–the unconventional instrumentation of Murray’s ensemble.

The musicians create an unconventional sonic context for Baraka’s reading that de-emphasizes and re-situates the apparent dimensions of black rage that seem to arise from verse that can “shoot guns,” through an almost carnivalesque, comedic, and off-kilter sound that troubles the linear expectations one might have of instrumentation amplifying the words on the page.  The dissonance between page and sound allows for useful pedagogical opening, in that it underlines the non-conformist, avant-garde aspects of the movement, and the fine line that artists such as Baraka were imagining between the intensity of black radical consciousness and the ability to articulate that standpoint outside of the expected forms of black cultural nationalism.

As these examples have shown, I incorporate sound into my pedagogical framings of black cultural and political identity as an opening through which students may expand their understandings of black consciousness and black political culture well beyond stagnant ideas of racial authenticity, while still preserving an understanding of the transformative and often radical possibilities that have been projected through black expression during the period.  It is the open space of sound that invests the project of black radical thought with the uncanny spontaneity of experimentation.  Having students understand ideas of expansiveness, asymmetry, and non-linearity as central to black cultural expression and critique–even as artists refuse to sacrifice an expressed political commitment to black resistance–begins to suggest ways for students to contemplate the intersection of identity politics with the unexpected, fantastic elements of expression that lie outside of more recent flattened diagnoses of black nationalism.  Teaching at the intersections of race and sound opens up new terrains of knowledge, dynamically expanding students’ abilities to think through the intricate and multifaceted formations of black consciousness during the volatile years of the 1960s and the resonance of those years in our present.

Carter Mathes is an assistant professor of English at Rutgers University.  He has completed a book manuscript entitled, Imagine the Sound: Experimental Form in Post-Civil Rights African American Literature, that focuses on the relationship between sound and literary innovation during the 1960s and 1970s.  He is co-editing a volume of essays on Black Arts Movement writer and critic Larry Neal; and also has essays in print or forthcoming on Toni Cade Bambara, Peter Tosh, and James Baldwin. At Rutgers, he regularly teaches classes focusing on African American literature, Twentieth-century literature, music and literature, and experimental writing.

They Do Not All Sound Alike: Sampling Kathleen Cleaver, Assata Shakur, and Angela Davis–Tara Betts

12 responses to “The Sounds of Anti-Anti-Essentialism: Listening to Black Consciousness in the Classroom”