Chicana Radio Activists and the Sounds of Chicana Feminisms 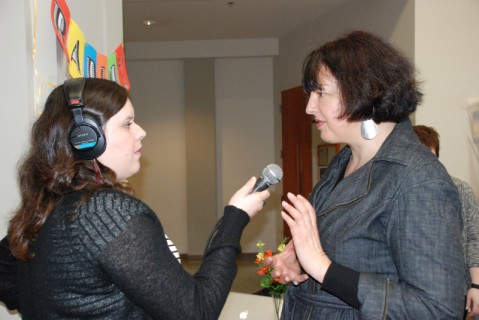 The power of hearing Chicana voices on the air is loud and clear. Indeed, when I heard Chicana feminist scholar Gloria Anzaldúa discussing her theory of hybridity and borderlands on the program The Mexican American Experience (1977) I was not only moved by the sound of Anzaldúa’s voice, but also by my intimate interaction with this influential feminista made possible through analog radio and digital technologies.  Such experiences made me want to trace my own genealogy and find other Chicanas involved in radio production. I began to listen for Chicana radio activism on the airwaves, and document when, where and how Chicanas utilize radio not just as a tool for the transmission of sound, but also as a feminist community-building platform.

My entry into radio came about when I joined Soul Rebel Radio—a radio collective composed of college students, environmentalists, musicians, comics, poets, and community activists in the Los Angeles area. A youth-centered radio program, Soul Rebel Radio airs monthly on KPFK 90.7 FM in Los Angeles and focuses on themes—such as the environment, war, and young women’s issues—and current events through comedy, youth voices, opinion pieces, editorials and interviews. With no prior radio or production experience, I joined the collective in October of 2007 hoping to fulfill my life long ambition of being on the radio. This experience of collective collaboration, which is both inspiring and challenging, became a cornerstone in my thinking about the empowering nature of media making, especially community radio. I cultivated the power of my voice through my participation in Soul Rebel Radio by learning how to write, edit and produce radio segments.

Now, as a Chicana feminist scholar and community radio practitioner, I am interested in collective, community-centered research projects that help transform the neoliberal, corporate institutionalization of media production and higher education. Although the content of my research is rooted in analog technologies, I work to ground the analysis of Chicana/o radio production through a digital Chicana feminista praxis, which includes the use of digital tools such as radio, digital film and open source software. This digital Chicana feminista theory and method may help uncover the ways in which community radio production constitutes an epistemological soundtrack to Chicana feminist activism, asking what are the sounds Chicana feminisms? Who are the Chicana activists of the 1970s and 1980s that utilized radio to build community, while incorporating an important aural element to their activism?

In answering these questions, I explore the ways in which digital tools can be utilized to uncover and reclaim subjugated knowledges.  However, I am in no way suggesting that digital technologies should supersede or replace face-to-face community building. In fact, my current project—from which this blog post is drawn—documents and creates an archive of Chicana radio activists, including radio station managers, producers, news directors and on-air hosts. I discuss how community radio production provides Chicanas and other marginalized groups the space to harness digital technologies and engage in the process of producing traveling sounds that speak back to discriminatory and oppressive practices. While my methods include digital film production, online archive building and curation, my writing here focuses on oral history collection, particularly my documentation of Radio KDNA.

On December 19, 1979, Radio KDNA (pronounced cadena, meaning chain) transformed the airwaves becoming the first full-time Spanish-language, non-commercial radio station in the United States (Radio Bilingüe KBBF 89.1 FM, in Santa Rosa, founded by farmworkers and Sonoma State undergraduates, was the first bilingual radio station, going on air in 1973). Located in Granger, WA, Radio KDNA’s goal was to utilize the accessibility of radio to build community while serving as a resource for the mostly Mexican and tejano migrant farm workers in the Yakima Valley. The founders of Radio KDNA believed radio was an accessible tool for Mexican and Latino farm worker communities who had little access to other media. Beginning in 1942, Mexican workers entered the United States under the Bracero Program whereby mostly agribusinesses contracted Mexican workers in response to labor shortages of World War II, which in turn caused the lowering of wages. Thus, many Mexican American and tejano farmworkers migrated to places such as Idaho, Oregon and Washington. With a growing population of a Mexican Spanish-speaking community, Radio KDNA used its Spanish-language radio platform to reflect the sociopolitical needs of this shifting demographic.

The oral history I conducted with Rosa Ramón—the only female co-founder of Radio KDNA who served as the station manager from 1979 to 1984—uncovers the radio station’s historical significance within community radio production, specifically as a site of Chicana feminist activism. Rosa’s testimonio reveals the process by which many Mexican-American, and specifically tejano families migrated from the Southwest to the Northwest in search jobs, many ending up in Washington’s Yakima Valley, an area in need of labor to harvest its crops. The migration of Mexican and tejano families served not only as a vital labor force in Yakima’s fields, it also created a community that needed and greatly benefitted from a radio station that addressed the needs of this community, both in content and language. Although Rosa was born in Arizona, her Mexican mother and tejano father decided to migrate north, stopping in Arizona and California before settling down in Eastern Washington where her family purchased a small farm. As Erasmo Gamboa illustrates in his monograph Mexican Labor and World War II, “After 1948, northwestern farms used fewer braceros as they stepped up the recruitment of Mexican Americans from the Southwest” (123). Rosa’s family is one of many families that migrated to the Northwest, a region that needed and greatly benefited from their labor.

Although the small community where Rosa grew up was mostly comprised of Mexican and tejano families, she experienced and witnessed racism and discrimination, especially at school where she was reprimanded for speaking Spanish and mocked for eating tacos instead of bologna sandwiches. Rosa was only one of four Latinos that graduated from Grandview High School. These early experiences of marginalization and her family history served as an impetus for Rosa to work in non-profits that benefitted her community, including Northwest Rural Opportunities, a community based organization set up in 1968 to provide services to seasonal and migrant farm workers in Washington state. Here she met Ricardo Garcia, another co-founder of Radio KDNA.

In an effort to bring Spanish language radio programming to the Pacific Northwest, in particular for the migrant farm workers in Eastern Washington, Rosa and Ricardo, along with Daniel Roble, and Julio Cesar Guerrero, worked tirelessly for five years to obtain a broadcasting license for a community radio station in the Yakima Valley. However, Radio Cadena was producing radio content even before opening the doors of their Granger, Washington studio in 1979. In 1975, Northwest Rural Opportunities began a training program for farm worker youth to learn radio production skills in Linden, Washington. They also began an educational training program for Spanish-speaking individuals who were learning English. In May of 1976, Radio Cadena began broadcasting on a subcarrier signal provided by Seattle-based community radio station KRAB FM, with the assistance of its station manager Chuck Reinsch. The use of this signal meant that listeners could only tune in through a special home receiver, which limited the number of people who could actually tune-in to Radio Cadena’s programming.

Ramón’s oral history reveals the importance and central role women played in the founding and development of this station, particularly in its focus on programming for, by, and about women. Her family’s migratory trajectory is an example of how Mexican and tejano communities who moved to the Yakima valley to work in the fields established a community that needed and benefited from community radio. Radio Cadena is an example of the ways in which the migration of people created the conditions for the founding of a community radio station that traversed sonic borders and infused its airwaves with stories of resistance.

As part of its community building activities, Radio KDNA trained women, especially farmworker women, to produce radio content. As Rosa shared with me during her oral history, Radio KDNA and the show Mujer (woman) were instrumental in centering women within the radio production process, by playing music by women like Mercedes Sosa and Lydia Mendoza, interviewing local women, creating news content, and training women to actually produce radio programs. Indeed, this model of Chicana radio production was instrumental in the founding and day-to-day activity of Radio KDNA, and it represents a vital technological component of the Chicano Movement era. Chicanas such as station manager Ramón, producer Estella del Villar, and news director Berenice Zuniga, not only held positions of power at KDNA, but they also produced Mujer, which aired weekly and whose goal was to provided farm worker women with news stories, music and other informative pieces addressing their distinct subjectivities. These female producers and their audience demonstrate the transformative power of community radio production and the role of women in a movement that often downplays their contributions.

By deploying Chicana historian Emma Pérez’s concept of the decolonial imaginary within Radio and Sound Studies to uncover the hidden voices of Chicanas within radio production,  I document stories that compel scholars to conceive of a new framework that listens to the sound migrations of Chicana media activism, the third spaces and technological tools of the Chicano Movement not just in the Pacific Northwest, but throughout the country.  The historical significance of Radio KDNA as the first full-time, Spanish language non-commercial radio station in the United States recasts Chicana/os as technologically adept and as active participants in the development of community radio. Moreover, Rosa Ramón’s oral history provides another example of the ways in which Chicana feminist activism emerged in conjunction with other social justice movements, further challenging the idea that Chicanas came to feminism after their white or African American counterparts. My historical analysis of Chicana radio production contextualizes current participation in media making, as radio can provide women of color and other marginalized groups the space to harness digital technologies to speak back and broadcast their concerns. When remixed with other components of Chicana feminisms, the sounds of Chicana radio activism constitute yet another track of resistance to the narratives that seek to silence these movements..

Monica De La Torre is a doctoral student in the Department of Gender, Women and Sexuality Studies at the University of Washington. Her scholarship bridges New Media and Sound Studies by analyzing the development of Chicana feminist epistemologies in radio and digital media production. A member of Soul Rebel Radio, a community radio collective based in Los Angeles, Monica is specifically interested in the ways in which radio and digital media production function as tools for community engagement. She is an active member of the UW Women of Color Collective and the Women Who Rock Collective. Monica earned a B.A. in Psychology and Chicana/o Studies from University of California, Davis and an M.A.in Chicana/o Studies from California State University, Northridge; her master’s thesis was entitled “Emerging Feminisms: El Teatro de las Chicanas and Chicana Feminist Identity Development.” Monica received a 2012 Ford Foundation Predoctoral Fellowship, which recognizes superior academic achievement, sustained engagement with communities that are underrepresented in the academy, and the potential to enhance the educational opportunities for diverse students.

Eye Candy: The Absence of the Female Voice in Sports Talk Radio–Liana Silva

Listening to the Border: “’2487’: Giving Voice in Diaspora” and the Sound Art of Luz María Sánchez–Dolores Inés Casillas

Yellow Rain and The Sound of the Matter: Kalia Yang’s Sonorous Objection to Radiolab–Justin Eckstein