Sounding Boards and Sonic Styles: The Music of the Skatepark 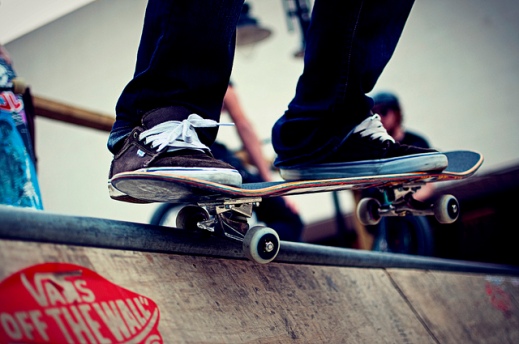 Welcome back to our summer series on “Sound and Sport.”  In today’s post, Josh Ottum discusses the sonorous sounds and unique rhythms of the sport of skateboarding. For an instant replay of last month’s post, click Tara Betts‘s “Pretty, Fast, and Loud: The Audible Ali.” For May’s post, click Melissa Helquist‘s “Goalball: Sport, Silence, and Spectatorship.”  Next month’s grand finale will feature a doubleheader on Brasil, with a post by Kariann Goldschmitt on the promotional sounds of FIFA 2014 and a podcast by Andrea Medrado entitled “The Sounds of Rio’s Favelas: Echoes of Social Inequality in an Olympic City.” We’ll close with another take on the Olympics, excerpted from David Hendy‘s recent Noise broadcasts for BBC Radio 4 on the politics of boos at the games. For now, get out your board, strap on your helmet, and prepare to jam. —J. Stoever-Ackerman, Editor-in-Chief

Seven layers of screen-printed, sugar pine maple whack the concrete. Aluminum axles pivot on rubber bushings as they slide across steel coping. Circular, molded polyurethane encases lubricated bearings that spin in midair before slamming onto birch. Vocal cords are strained as exclamations are made in response to a maneuver. These are the unmistakeable sounds of the skatepark. As skaters ride through the park, a unique sonic tapestry emerges revealing a constantly shifting array of timbre, pitch, and rhythm. This sliding aural space is similar to the compositional flow between rehearsed maneuvers and improvisatory actions, connecting skaters in the skatepark to musicians improvising in a jam session.

Just as the results of a musical performance depend on acoustics of the venue and the idiosyncrasies of the instrument, the skater is beholden to a similarly complex signal chain. The aural atmosphere of the skatepark relies on the number of other players, as well as their chosen instruments, and unique approach to playing. While surveying the sonic and social dynamics of four skateparks in Ohio and California for this study, the line between performer and listener was often unclear. Skaters are consistently sliding between roles as passive observers and active participants, watching and being watched, making sound and listening to the sounds of others. And, just as an improvising musician aims to develop her own unique voice, the skater intertwines sonic and visual elements into a unique stylistic signature all her own. In this study I will look at the skatepark as a site for skaters to express themselves much in the same way that a musician plays an instrument at a jam session. I will explore the board and terrain, the importance of style, and the culture of the park itself. To begin, I will contextualize the ways in which the skateboard has been constructed as a sonic instrument.

As a skater lands an ollie in the Vans Skatepark in Orange, California, the sound of hard polyurethane wheels slamming against a hollow birch ramp emanates throughout the warehouse, entangling with distinctive sounds made by other participants. The listener is made acutely aware of each skater’s instrument and stylistic approach to performance. What differentiates the rider on a board in the skatepark from a guitarist playing in a rock club? Just as the materials of the electric guitar and its signal chain inform the sonic nature of the instrument, the skateboard and its engaged terrain sound out unique and identifiable characteristics of each device. I spoke with a skater at Flipside Skateboard Shop in Athens, Ohio about the specifics of wheel construction and his own personal preferences:

Just like the layered wood of an electric guitar body, boards are made through a multistep manufacturing process that involves layering thin plies of wood. Maple is most commonly used with the relative flexibility of the deck determining qualities of audible resonance as a skater ollies or railslides. And trucks, which function as axles, can be heard grinding along a surface such as pool coping, a painted curb, or a handrail.

In order for these materials to make sound they must be controlled by a rider and engage with some kind of terrain. The combination of what materials are chosen and how they are used result in a rider’s unique approach. In the skatepark, skaters swathe themselves in clothing, pads, and helmets while riding devices wrapped in visual signposts of self-expression that sound out the priorities of the particular rider.

Following Henri Lefebvre, Iain Borden speaks of the skateboard as a “lived component of the body, its actions and its self-image in relation to the terrain” (28). Similarly, from my time spent at skateparks in Ohio and California, I have noted the malleability of terrain as a domain to express one’s own unique style. Skaters use their devices as instruments, playing the park, repeating phrases, overlapping with sounds emitted from their peers. All the while, advertisements adorn both bodies and instruments and maneuvers mimic the iconic moves of sponsored skaters viewed in magazines. Visiting Focus Boardshop across the street from the Etnies Skatepark in Lake Forest, California reminds the observer that the elusive, focal point of style in the world of skateboarding is not only confined to the visual realm. As reissued decks from Powell Peralta, Slimeball wheels, and multiple videos adorn the walls of the shop, teenage skaters hang out, asking to bend and stand on decks and spin wheels, all the while watching and listening to newly released videos. Just as guitars and synthesizers reflect the users aesthetic outlook, the look and sound of skateboards signal to a skater’s audience (often other skaters in the park) what kind of skater he or she is.

Tara Rodgers’ insightful article on wood paneling on synthesizers for Sounding Out! has its analogue in the spiritual aura of the object in skateboarding. Bound up in this aura are genre-shaping histories that have taken the sport in innumerable directions. Whether it is the catwalk ethos of Vision Street Wear, Danny Way’s connection with Monster and Red Bull energy drinks, or enjoi’s self-referential marketing, the graphics that wrap around skate gear carry with them weighty connections to the sport’s most original moments. These moments are, of course, defined by marketing campaigns, hosted in influential magazines such as Thrasher and Transworld, and the zietgeist of the time. Intertwined with these branded materials is the sonic quality of the instrument. The sound of the instrument itself reflects the particular ethos of the skater who selected it. In the clip below, an employee working at Focus Boardshop in Lake Forest, California talks about the particular way his board’s sound reflects the idiosyncratic nature of its components. Notice how he skater speaks about the sound of his bearings as a direct link to his style, connecting to Borden’s idea of the board as a lived component of the body.

During my visit to the community skatepark in Athens, Ohio I come across two skaters who have returned to the sport after a two-decade break. One skater sports a longboard with 70a wheels so soft you can’t hear him skate through the concrete pool. Immediately after interacting with the longboarder, another skater finishes a session in the pool at the Athens skatepark with a long slide. I ask him about the role of his wheels and what he calls “the best sound in the world”:

Skaters related the histories of their boards to me with a sense of fond nostalgia. These histories functioned, primarily, as a mode of individuation, through which those observed were seen refining their identities within the community through conversation. As more time is spent at each of the parks, I begin to notice communal flows of conversation between skaters and their engaged terrain as well. Competitive aspects to out-do each other, synchronized maneuvers, and vocal responses are percolate the soundscape. As listeners perform and performers listen, connections with well-formed cultural codes of improvisational music begin to emerge.

Improvising musicians often use the context of the jam session as an opportunity work out new ideas and rehearse repertoire. Minton’s Playhouse in New York is one of the original sites for the jazz jam session. Here, “cutting contests” allowed players the opporunity to outplay each other with virtuosic displays of improvisational prowess. Musicians play to hear each other individually and as a unit, often pushing each other to extremes. The sound is composed, listened to, and then reacted to. Skateparks provide a similar atmosphere. A trick (like an ollie) is immersed in the sonic flows of the surrounding skaters. The skatepark is simultaneously encouraging and competitive, forgiving and relentless.

When I visited the Vans Skatepark on National Go Skateboarding Day park employees tempted skaters to display their best moves throughout the park with the promise of free swag. The environment remained friendly and encouraging as skaters rose to the challenge, welcoming the pressure.

The rituals of the skatepark are varied in their scope. When a skater lands a difficult trick, it is common to hear the tapping of board tails on the ground; applause. Vocal reactions to maneuvers (landed or failed) are also quite common.

What sets the sonic atmosphere of the skatepark apart from the sound of skating outside the park is the palpable lack of intruding sounds from the outside world. As communities continue to accept the skatepark as part of their permanent landscape, the once transgressive sound of the sport takes on a new meaning. The scrapes and slides that once signaled intrusion are now contained in a controlled space. While visiting these jam sessions, it became clear that the sounds of the skatepark remain a mostly male-dominated activity. While the instruments and terrain remain available to the wider public the sound of the skatepark reflects a relatively closed environment often shrouded in platitudes of youth culture. However, once a sense of acceptance and experimentation is cultivated, some other aspects of the skatepark are revealed. The skatepark is a place to play and explore the range of one’s repertoire. It is a place to engage with the limitations of the instrument and one’s own physical faculties. And, it is an environment that encourages friction, noise, and distortion. The skatepark is a communal amplifier, obscuring and reflecting sound as the players immerse themselves in the ultimate sounding board.

While immersing myself in the sounds of the skatepark for this project, the idea came up to reimagine the sounds of the skatepark as a musical composition. I asked musicians Michael Deakers, Casey Foubert, Junior High, and Ryan Richter to make a piece that used any portion of the recordings of the four skateparks I visited. Their work reflects a deep connection to the rehearsed and improvisational aspects of music-making and skateboarding. The sounds of these pieces emerged from hours of practice and spontaneous decisions allowing for a particularly effervescent creative outcome. To hear these, check out out my Soundcloud here.

Josh Ottum holds an MFA in Integrated Composition Improvisation and Technology from UC Irvine and is currently a PhD student at Ohio University in the School of Interdisciplinary Arts. His research interests include sound, energy extraction, Van Dyke Parks, Southern California, library music, and synthesizers. As a singer-songwriter, composer, and producer, Josh has released multiple records on various labels, completed numerous international tours, and composed music that has appeared on MTV, AMC’s Mad Men, and NPR.

“Tofu, Steak, and a Smoke Alarm: The Food Network’s Chopped & the Sonic Art of Cooking“–Seth Mulliken

“Sounding Out! Podcast Episode #5: Sound and Spirit on the Highway“–David Greenberg

5 responses to “Sounding Boards and Sonic Styles: The Music of the Skatepark”