My Time in the Bush of Drones: or, 24 Hours at Basilica Hudson

Ed. Note: We wanted to run this piece in advance of the Basilica Hudson’s SoundScape event taking place this Friday, September 14 – Sunday, September 16, 2018.  Our Amplifying Du Bois at 150 forum will return next week.

Three weeks into a new semester and I am packing for another weekend of irresponsible travel. Irresponsible financially (because air travel on a graduate stipend is a decadence rarely rewarded) and irresponsibly professionally (because missing an annual department event, grading in a car, and sleeping on the ground for two days is a string of realities that stand sternly opposed to anything like good sense). I am doing all this in order to attend Basilica Hudson’s Soundscape: a wide and ranging line up of musicians and artists whose aesthetic commitments fall, shall we say, considerably aslant from the pop-cultural median. I am doing all this because of something that happened last year at this place, something I am still trying to work out. And this means, amongst concerned colleagues and family and friends, I’m again hearing that familiar, stuttering articulation of disbelief. Phrased, with equal parts confusion and concern, they rejoin:

This question first started popping up late last March. It came repeatedly, unblinkingly, and, I should add, not-unreasonably. What’s more, this was, in a very real way, my fault. For I had failed to develop a pithy ready-to-hand account of precisely why I was to travel from Chicago to New York City and New York City to Hudson, only to sleep on a thin mat on the concrete floor of a converted foundry while listening to loud, sustained bursts of noise (with varying degrees of harmonic familiarity) for an unbroken period of 24 hours.

Instead, I had only an intuition that failed to pass even the slightest of critical muster: Basillica Hudson’s 24-HOUR DRONE festival seemed weird and extreme and like something might happen there. On this basis, it seemed like a good thing to do.

I can now state with some clarity (though still lacking anything like critical poise) that something did in fact happen there, and it was indeed a good thing to do. Though what that “something” was remains frustratingly elusive. 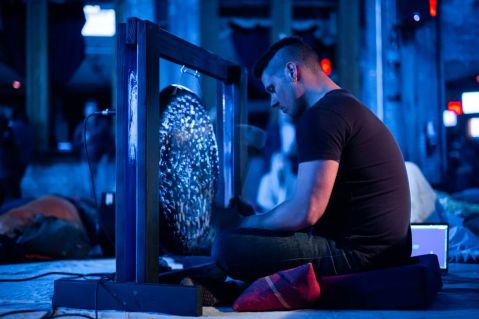 This piece thus began as a review, but ended necessarily quite differently. The conventions of a review call for evaluation and normative judgement; they require statements regarding the quality of an event or object. I can offer very little in this vein. I’m still trying to wrest from memory something stubbornly mute and fleeting — still trying to figure out what it was, precisely, that happened there.

The drive up remains clear enough in memory. The usual crackle of reunited conversation between dear friends long-separated by geography; a decision not to listen to the then-new Grouper album (we would have enough heart-dragging ambient texture in the coming hours, we concluded); the sounds of Brooklyn passing into that hushed early-Spring upstate on Route 84. We at one point, for reasons that need not become articulate, listened to the Gin Blossoms. But as we pulled into the graveled parking lot a sense of anticipation and confusion returned. What was this thing?

To begin, we might reasonably call it an event.

Basilica Hudson — an upstate New York-based non-profit for the arts that puts on the event annually — admirably describes it thus:

An immersive event and all-encompassing experience, 24-HOUR DRONE is a roving, international series presented by Basilica Hudson and Le Guess Who?, featuring musicians and sound artists experimenting within the spectrum of drone to create 24 hours of unbroken, uninterrupted sound.

Through this expanded programming, 24-HOUR DRONE strives to break down barriers across borders, offering an opportunity to connect diverse musical communities and traditions, offering a localized snapshot of DRONE within the larger context of an imagined universal sound.

The language here should scan as familiar to anyone accustomed to reading music and arts press. Roving, experimental, barrier-breaking, border-crossing: these terms all call up a restless energy, the excitement of the wholly new, the different, the thoroughly non-normative. As it turns out, all these attributes turn out to be more-or-less (if uninterestingly) true. 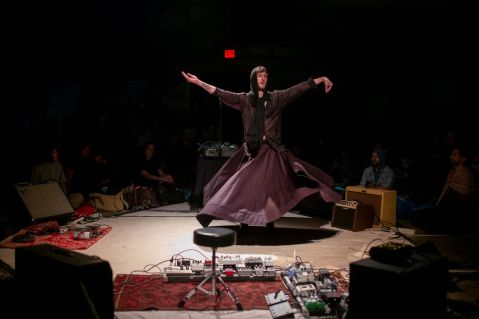 Over the course of the day and night, I heard the ethereal saxophone of PAUL, the whipping clangor of Pharmakon, and — I want to emphasize this — the absolutely breathless New Castrati, January Hunt’s exceptional and mournful work living up to her billing elsewhere as “synth, drones, and the annihilation of man.” A sentence above, though, still merits pause: “a localized snapshot of DRONE within the larger context of universal sound.” Roving energy and shattering experiment here take shape as a snapshot, the whirring and calamitous universal stalling for a moment in a discrete particular. 24-HOUR DRONE attempts to lends form to what was too diffuse to be seen.

So, modestly, in lieu of aesthetic judgement, a proposition: the value of Basilica Hudson’s 24-HOUR DRONE is to offer space to sound.

Indeed, for an event so centrally concerned with sound, 24-HOUR DRONE is as much about the Basilica — a converted nineteenth-century cathedral-esque foundry — as it is about sound. And for good reason: the Basilica has been beautifully repurposed — gutted of its original use and re-asserted as an malleable and improbably elegant arts space. Hundred-plus foot ceilings dwarf individual bodies, it’s begrimed upper windows modulate the midday sun into a speckled and hazy sepia, and the elaborate truss-work grids the scene in an industrial domework. The Basilica is a work of architecture meant to imagine and hold, however briefly, those fleeting shards and fragments of something yearning toward a “universal sound.”

Though even as stunning a work of architecture as the Basilica can only ever confer a loose limit. These fragments are always clamoring for a more robust scene, always threatening to join the broader universal that awaits. Sound passes through walls, vibrates along concrete, penetrates skin and mingles among bodies. Spaces focalize sound’s capacities for the social and ethereal, by preserving and witnessing its constitutive ephemerality. Different spaces draw our attention to sound’s actually-existing materiality: a materiality that doesn’t quit, one that loosens our grip on our more ready-to-hand material worlds.

Grasping this materiality is not easy; it is maybe impossible. What possible cognitive torque will allows us to grasp at this overtopping universal? One option, it seems, is sheer brute force.

The term “endurance” rightly comes up repeatedly in press-documents and FAQs. For the event is knot of time and space (24 hours at the Basilica) which commands an attention to sound as a given, but sounding too as demanding an economy of attention wholly strange–a fidelity to sound that is without end. Limning out these ambitious parameters, to reign sound in, if for only a moment, requires something added.

Sonic spaces have a familiar, if knotty, history. Cathedrals invoke a beatific space, trussed by elaborate ornament and a spiritualized verticality. Music festivals inscribe traditions of sound and histories of capital — crowds and power, in Gina Arnold’s felicitous adaptation of Elias Canetti. Dwellings and offices, cafes and bars. Spaces arrange us in sound, and sound among us.

DRONE, then, is a provocation to think about sound — to think it over time, and to do so in a necessarily rarified space. This provocation worked; but I felt it only at an extreme limit.

At the twentieth hour (8 AM) I needed coffee. I had slept (kind of) through the night, rose to a bell ceremony, and walked immediately, groggily outside. As I passed through the door frame into the dewy and drizzly upstate morning, the sound — as if from a vacuum — muted and was voided of weight. I walked through the mostly empty streets.

These empty streets were, as it turned out, raucously loud. Distant cars motoring across country byways, the buzzing of a streetlight long past its prime; my tinnitus — a steadily pitched pulse acquired in those irresponsible salad days standing too-close to a crash cymbal — reminding me of all I may one day not hear. These sounds were, quite suddenly, clamoring for my attention, demanding my thought, straining for distinction. The espresso machine, the door hinges, the bathroom sink. Floorboards and rain and leaves and the Hudson and, and, and.

I walked back, not a little unsettled.

I had breakfast outside the venue among gravel-scraping shoes and overheard conversation.

Finally, I went back inside for what turned out to be the final act: Dronechoir Syllaba. The scene remains hauntingly clear.

A grouping of women entered, dressed entirely in white, each with one earbud in-ear, the other hanging loose. Some, if not all, had a length of yarn tied around their waist and dragging along the ground behind them a screw, nail, metal implement, which, as they walked produced a fragile, slender tone. They congregated in the center of the room and produced a careful and lush chord, its density piling up toward the far reaches of the ceiling. Slowly, the chord broke apart.

But, then, that’s not true.

I should say: slowly, the women moved apart, the chord remained, stretched and pitched against new and different coordinates, inhabiting the Basilica’s elastic space in a new configuration. Notes moved, their bearers slowly pacing around the exhausted and supine bodies of Droners along the floor.

A choir member approached me, holding out her free earbud. I shook my head, wearing a nervous grin. She insisted; I put it in. Playing quietly in that tinny bud was a reference tone for me to share. I looked at her as though I didn’t understand, and she smiled as if she did. Insisting. I managed a small hum, off-kilter and out of tune, before handing it back to her. Looking around, I saw the relationship I had repeated among others across the room. The chord kept mutating — dilating and contracting, swelling and receding, different tones calibrated along moving spatial coordinates. The choir returned to formation in center.

Everyone was smiling, dazed, like milkdrunk babies or punchdrunk lovers. We had slept amongst each other, passing a night in a shared space, while sound had enwrapped and enraptured us. We had borne witness to valences of sound hitherto under-noticed. We had joined a choir, if only for an offkilter moment in a space out-of-joint. 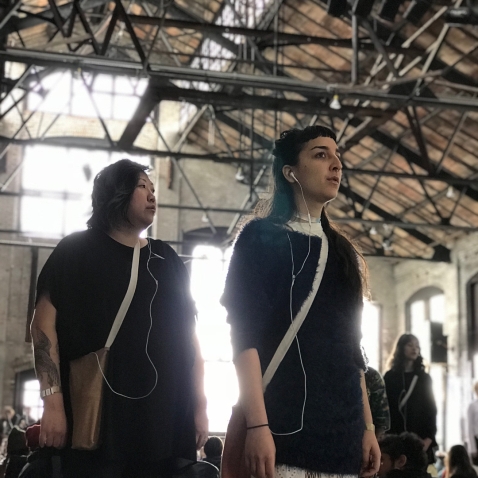 We thought, my traveling companion and I, we thought the car ride back to the city would be for silence. For what else could you thirst after 24 such hours in the heart of sound? But this turned out to be deafening uncomfortable, weird. We were, in our own private ways, estranged from sound. Which is really another way of saying we were in different relation to sound and to the spaces it fills. There, a foundry. Here, a car. We put on, in lieu of silence, a little slice of magic, the condensation of all groove and beat, the most organized flash of pop brilliance this side of 1980. We of course put on Thriller.

To give attention to what we all already share — space and sound, history and music. To be adrift but not asleep in it all.

As for what happened?

I’ll try to grasp that next year.

Robert Cashin Ryan is a PhD candidate in the department of English at the University of Illinois-Chicago. He has written in various places about literary form and formalism, the relationship between Herman Melville and Charles Dickens, and Christmas as an intellectual problem. He curated and introduced a gathering of essays on music, sound, and noise for Post-digital forthcoming from Bloomsbury 2019.

This is Your Body on the Velvet Underground–Jacob Smith

Live Through This: Sonic Affect, Queerness, and the Trembling Body–Airek Beauchamp