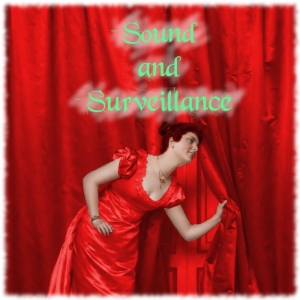 It’s an all too familiar movie trope. A bug hidden in a flower jar. A figure in shadows crouched listening at a door. The tape recording that no one knew existed, revealed at the most decisive of moments. Even the abrupt disconnection of a phone call manages to arouse the suspicion that we are never as alone as we may think. And although surveillance derives its meaning the latin “vigilare” (to watch) and French “sur-“ (over), its deep connotations of listening have all but obliterated that distinction.
Sounding Out! invites abstracts that consider the ways in which we surveil, and are surveilled through sound. Abstracts which deal with sound in the context of office surveillance, military surveillance, cybernetics, medical surveillance, mobile technology, and even self-surveillance are encouraged.
Please email 250 word abstracts to Multimedia Editor Aaron Trammell (mobilestudios@gmail.com) by July 15, 2014 for consideration.