Andreas Duus Pape: is an economist and a musician.  As an economist, he studies microeconomic theory and game theory—that is, the analysis of strategy 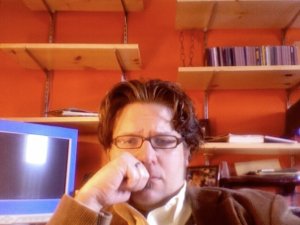 and the construction of models to understand social phenomena—and the theory of individual choice, including how to forecast the behavior of agents who construct models of social phenomena.  As a musician, he plays folk in the tradition of Dylan and Guthrie, blues in the tradition of Williamson and McTell, and country in the tradition of Nelson and Cash.  He plays acoustic guitar, harmonica, and voice: although the technology of his musical production is a hundred years old, his ideas are often quite modern, and he covers songs as old as early last century and as recent as this one.  Pape is also an assistant Professor in the department of Economics at Binghamton University, where he teaches microeconomic theory at the undergraduate and graduate level.  He is a faculty member of the Collective Dynamics of Complex Systems (CoCo) Research Group: http://coco.binghamton.edu and considers complex systems and agent-based modeling to be central to his research.