Since its inception at the World Forum for Acoustic Ecology in the 1970s, soundwalking has emerged as a critical method for sound studies research and artistic practice. Although “soundwalking” now describes a diversity of activities and purposes, critical discussions and reading lists still rarely represent or consider the experiences of people of color (POC). As Locatora Radio hosts Diosa and Mala have argued in their 2018 podcast about womxn of color and the sound of sexual harassment in their everyday lives and neighborhoods, sound in public space is weaponized to create “sonic landscapes of unwelcome” for POC.

Black Studies scholar Regina Bradley wrote of white Americans’ increasing hyper-surveillance of black people in her post “Fear of a Black (in the) Suburb,” in particular, in spaces white people consider “safe,” “quiet” and in/visibly “theirs”: the suburbs. Arguing that “suburban soundscapes serve as backdrops of 21stst century racial anxieties and whiteness,” Bradley notes how black experiences of moving into suburban spaces often represent “the struggle of integration [that] collapses the notions of white suburbia as a site of ‘perfect peace.’” Bradley also shows how these sites “destabilize classifications of black trauma as restricted to urban spaces like the inner city, which is believed to embody blacks’ realities, ” even though scholars such as Karen Tongson have challenged the idea of contemporary American suburbs as demographically “white.”

Nonetheless, as comedians Keegan-Michael Key and Jordan Peele represent in their 2013 sketch “Hoodie”—so named for the item of clothing that Trayvon Martin was wearing when killed by George Zimmerman as he was walking home from the corner store in suburban Sanford, Florida in 2012—U.S. American suburbs continue to represent unseen yet visceral—and potentially mortal—dangers for people of color.

Different—but related—dangers surface for Latinx people in the United States.  Online journal Remezcla has reported on the increase of white supremacist violence in malls, restaurants, grocery stores and on the street, particularly white people yelling and otherwise harassing Spanish and Spanglish speakers, or English speakers with Spanish accents.  Cell phone footage of such attacks have surfaced almost daily on the Internet in 2018. They represent violent policing of the soundscape by white people and a retrenchment of the sonic color line.

Given the history of racism and the rise of overt, public white supremacist violence in our contemporary moment, we want to hear from scholars, artists, and sound professionals regarding their theorizations, experiences, research, and interventions into “Soundwalking while POC.”  Do soundwalks, coming as they do from the specific regional, cultural, and historical context—1970s Vancouver, BC, designed by Hildegarde Westerkamp, and explored by R. Murray Schafer, part of the overwhelmingly white and male acoustic ecologist collective of the World Soundscape Project at Simon Fraser University—reinforce a particular normative white Western subjecthood and understanding of space (even as many soundwalk practitioners overtly strain not to)? Do contemporary soundwalk designers consider, explore, and represent the divergent experiences of POC in their scores?  How? When? Where? To what end?

We posit that one impact of the soundwalk’s origins in acoustic ecology is that the majority of soundwalks are conducted either in urban spaces or in isolated “natural” settings, creating a polarized understanding of spatial practice.  Are suburban and rural living spaces, then, desirable and/or accessible for soundwalks? Why or why not? How do different embodiments impact mobility and safety in ways that many soundwalks do not consider or address?

Furthermore, the neighborhoods of people of color frequently function as a kind of “local color” sonic tourism for many soundwalk participants—á la the “Bronx Birth of Hip Hop Soundwalk” that Detour suggests “is best during daylight hours.” Has the history and historiography of soundwalk practice been indelibly shaped by ideologies of whiteness?  Can soundwalks function as tools to contest such exoticizing listening practices? 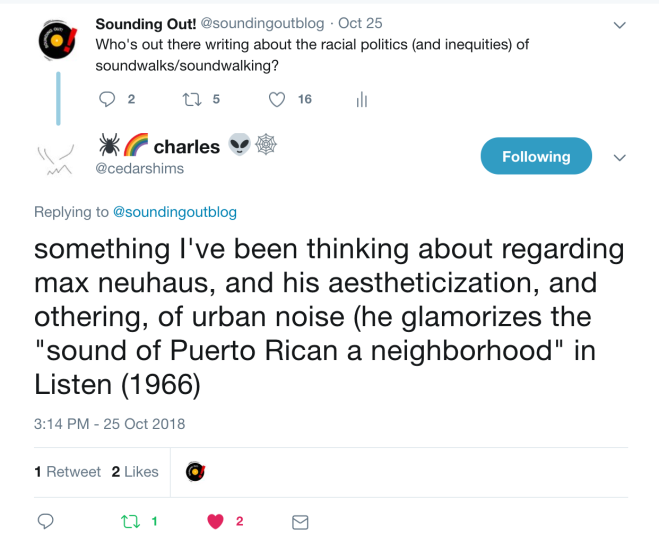 Most importantly, while we often think of soundwalks as engines of knowledge production, we must also consider that they may simultaneously silence divergent worldviews and perspectives of space and place.  In “Black Joy: African Diasporic Religious Expression in Popular Culture,” Vanessa Valdés explored alternate conceptions of space held by practicioners of Regla de Ocha, epistemologies rarely, if ever, addressed via soundwalks. “Within African diasporic religions . . . including Palo Monte, Vodou, Obeah, Macumba, Candomblé – there is respect for the seemingly inexplicable,” Valdés remarks, “there is room for the miraculous, for that which can be found outside the realms of what has been deemed reasonable by systems of European thought. There is room for faith.”  Does current soundwalk praxis—either as research method, public intervention, artistic medium, field recording subject, or pop culture phenomenon—impose dominant ideas about space and knowledge production as much as—if not more–they offer access to alternatives? Are there alternate historiographies for soundwalking that predate the 1970s? Can soundwalks provide such openings, disruptions, and opportunities without a radical rethinking? What would a decolonial/decolonizing soundwalk praxis look and sound like?

We seek answers to these questions in the spirit of Randolph Jordan’s 2015 guest edited series for Sounding Out! Unsettling the World Soundscape Project.  Unsettling featured posts by Jordan, Mitchell Akiyama, and Vincent Andrisani that addressed how the WSP submerged indigenous histories and experiences in Canada and “critically investigate[d] the output of early acoustic ecology and assess its continuing value for today’s sound studies.

We invite 250-word pitches for short essays that examine the racial politics of soundwalking and soundwalks and/or examine soundwalking as historically, geographically, and culturally particular.  We also encourage pieces by/about/for people of color engaging in critical soundwalking practices, such as Mendi + Keith Obadike’s “Compass Song,” a site-specific soundwalk app offering a song and poem-based perspective of New York City’s Times Square, and the anti-gentrification interventions by multimedia artist Amanda Gutierrez in the Pilsen, neighborhood of Chicago, Illinois. We are especially interested in posts that address soundwalking intersectionally. How do class, gender, and sexuality complicate the experience of soundwalking while POC?

Even as many of the examples we have shared refer to the specific racial politics of the United States, we do not want to limit “Soundwalking while POC” to US-contexts. We absolutely want to hear from writers and artists who practice soundwalks around the globe.  What can we make of the global popularity of soundwalks, particularly in light of the issues we have relayed here? How does/might soundwalking while POC look, sound, and feel different (and specific) in different countries? Do these settings offer alternate possibilities? New issues and complexities? Both? Something else altogether?

Your writing can be personal, critical, historical, academic-y, or an iconoclastic mix of all of those. We welcome research-based posts and posts examining aural experiences through a first-person narrative style; many of our posts mix both. We also welcome ideas for podcasts as well as artistic posts that use the blog format to create an original audio-visual experience.

Please send a 250-word pitch to Jennifer Stoever(jstoever@binghamton.edu) by December 3, 2018. If selected by our editorial team, your draft is due at the end of March (approx. 1000-1200 words). The series will be published in May, so make sure you have time for edits in April. And don’t forget to read our mission statement, submission guidelines (and peruse some posts) before sending us your stuff.

This call was written in collaboration with Managing Editor Liana Silva and the Fall 2018 students of Binghamton University’s English 593 “How We Listen” course: Hala Abdulhaq, Madeline Gottlieb, Patricia Gross, and Eniko Vaghy.