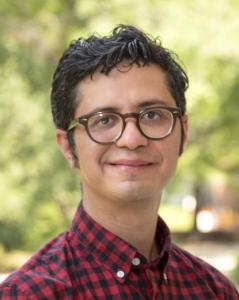 Iván Ramos is assistant professor of LGBTQ studies in the department of Women’s Studies at the University of Maryland. He was previously a University of California President’s Postdoctoral Fellow in the Department of Ethnic Studies at UC Riverside.He received his PhD in Performance Studies with a Designated Emphasis in Women, Gender, and Sexuality from UC Berkeley. His first book, Sonic Negations: Unbelonging Subjects, Inauthentic Objects, and Sound between Mexico and the United States, examines how Mexican and U.S. Latino/a artists and publics utilized sound to articulate negation in the wake of NAFTA. Iván’s broader research investigates the links and slippages between transnational Latino/a American aesthetics in relationship to the everydayness of contemporary and historical violence. In Fall 2016, he was a member of the “Queer Hemisphere: América Queer” Residential Research group at the University of California Humanities Research Institute at UC Irvine. His writing has appeared in several journals including Women & Performance: A Journal of Feminist Theory, Studies in Gender and Sexuality, and ASAP/Journal. He has articles forthcoming in the catalog for the exhibition Axis Mundo: Queer Networks in Chicano L.A., sponsored by the Getty Foundation, and the anthology Turning Archival from Duke University Press.