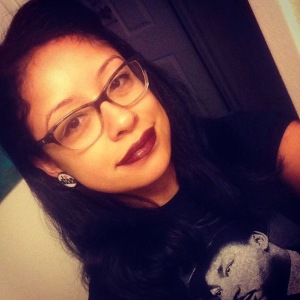 Marlen Ríos-Hernández is a Ph.D. Candidate in the Ethnic Studies Department at the University of California, Riverside. Her current research revolves around queer Chicana/Mexicana punks in Mexico and Los Angeles from 1977-early 2000s. Her dissertation aims to theorize and argue how Alice Bag, an innovator of the 1970s Los Angeles punk scene alongside other Mexicana punks, utilized noise to correlate the systemic disenfranchisement of womxn of color with the desire for transformational change integral to the survival of Mexicanas and first generation Chicana womxn, especially during the Reagan and Bush Administrations. Via Ethnic Studies as her area of study along with her humanities and arts training as a Musicologist, Marlen investigates the relationship between unruly Chicana/Mexicana performing bodies and bisexuality, swapmeets, police brutality, photography, and film as instruments of noise-making necessary to invert normative gender and sexual politics in punk.