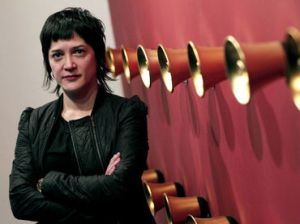 Sound and visual artist Luz María Sánchez  studied both music and literature. Through her doctoral studies Sánchez has focused on the role of sound-in-art since its inception in the 19th century through its evolution as an independent art practice in the 20th century. Sánchez then examined the radio-plays of Samuel Beckett linking them to the sound-practices that emerged in the mid-20th century. Sánchez has continued her research on technologized-sound: she was part of the conference Mapping Sound and Urban Space in the Americas at Cornell University, and her book Technological Epiphanies: Samuel Beckett’s Use of Audiovisual Machines will be published in 2015. Her artwork has been included in major sound-and-music festivals such as Zéppellin-Sound-Art-Festival (Spain), Bourges-International-Festival-of-Electronic-Music-and-Sonic-Art (France), Festival-Internacional-de-Arte-Sonoro (Mexico), and has presented exhibitions at Marion-Koogler-McNay-Art-Museum, Dallas Center for Contemporary Art, Galería de la Raza (San Francisco), John-Michael-Kohler-Arts-Center (Sheboygan), Illinois State Museum (Chicago/Springfield), and Centro de Cultura Contemporánea (Barcelona) amongst others. She was granted a special distinction in the category Nouvea-Musiques at the Phonurgia-Nova-Prix (Arles), was the recipient of a Círculo-de-Bellas-Artes-de-Madrid’s grant, and Yuko Hasegawa selected her for the Artpace-International-Artist-in-Residence. She is member of the Board-of-the-Sound Experimentation-Space at Museum-of Contemporary-Art (MUAC). Sanchez was recently awarded the First Prize of the Frontiers Biennial (2015).