From Mercury to Mars: “‘War of the Worlds’ as Residual Radio” from Antenna

“WOTW’s notoriety is obviously explicitly a result of the attention the mainstream media gave it at the time, as well as the fame and success that followed Orson Welles’s ascendance in film, and subsequently, his position in the critical and academic canon of auteurs.  However, WOTW’s circulation through LP, cassette, rebroadcast, and mp3 also implicitly shapes how people look back at this time in entertainment history, while also allowing this recording to become an object of fetishism and desire …”

Click here to read the rest of Nora Patterson’s reflections on recorded releases of the “War of the Worlds” broadcast.

This post is the second in our ongoing series in partnership with Antenna, From Mercury to Mars: Orson Welles on Radio after 75 Years. Stay tuned for our next installment on Sept. 2: Debra Rae Cohen on the inaugural broadcast of the original Mercury series, Welles’s fascinating version of Bram Stoker’s Dracula.

Miss the first post in the series? Click here to read Tom McEnaney’s thoughts on the place of Latin America in Welles’s radio work. 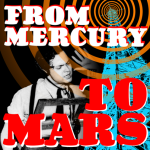