Music is not Bread

Wilco’s most critically acclaimed album, Yankee Hotel Foxtrot, was released only after they were famously cut free from their original label (Reprise Records, now owned by Warner Brothers). Foxtrot found its new home (on Nonesuch Records), says lead singer Jeff Tweedy, because of leaked tracks on the internet. “Music is not a loaf of bread,” he says. “When someone steals a loaf of bread from the store, that’s it. The loaf of bread is gone.”  But that’s not the case with an mp3. “People who look at music as commerce,” he continues, “don’t understand that. They are talking about pieces of plastic they want to sell, packages of intellectual property.”
.

The Marina City Building in Chicago was put on the cover of Wilco's Yankee Hotel Foxtrot. Picture by the author.

.
I am an economist and a musician.  Does Tweedy’s claim mean that that an economic view and the musician’s view of music are in conflict?  I don’t think so.  I think Tweedy’s claim is exactly right on the economics, that music is not a loaf of bread.  I also think that an understanding of the economic properties of music, to which Tweedy hints, can illuminate as set of strategies for musicians today.  I describe the economics of “music is not bread,” below, and then discuss the strategy that I am pursuing (in my podcast, The Lion in Tweed), which is informed by this perspective.
.
THE ECONOMICS OF “MUSIC IS NOT BREAD”
Economists study how goods are produced (among other things), and loaves of bread and mp3s are produced in a very different ways. To explain this difference, economists make a distinction between private goods and public goods.  Private goods are rivalrous: as others consume the good, there is less is left for you.  Public goods are nonrivalrous: as others consume the good, the amount of good left for you is unchanged.  Bread is a private good. If I eat the bread, there is no bread for you.  Music is a public good. If I listen to the song, there is still a complete song left for you.  If bread were a public good like music – no matter how many times you took a loaf of bread from the counter, there would still be a loaf of bread on the counter. You could feed the world with that loaf of bread.
.
The idea that music is a public good underlies the fundamentally economic claim that copying is not theft. An economist would say that theft is a thing that applies to private goods, to things that one is deprived of, when another takes them. Public goods cannot be stolen: they can only be shared.

Video: “Copying is not Theft” by Nina Paley.

..
Economists will also say that the reproduction cost of a public good is essentially zero. An idea is a public good: consider the cost of telling someone an idea versus the cost of inventing the idea initially.

It is important to note here that when I use terms like “public good,” and “private good,” I am only describing the economics of that good’s production. I am not making a legal or political claim. So, what is the point?  What is the value of looking at music as a public good?
.
Economics can tell us a lot about the supply of public goods; public goods are undersupplied, according to economists.  This is a problem. The natural price of a good it its reproduction cost (also called `marginal cost of production’).  Consider a private good, like a loaf of bread: the cost of `reproducing’ a loaf of bread is that of making a new loaf of bread, so the natural price of bread is the cost of the ingredients and baker’s time.  The reproduction cost of music is zero: so we would expect the price to go to zero.  As the price of music approaches zero, however; there is no money left to cover the costs of recording and songwriting.  For this reason, making music becomes a labor of love alone; very few people can afford to be musicians. Hence the conclusion: public goods are undersupplied.
.
So how can we solve this problem?  The traditional corporate response is to transform the public good into a private good by controlling and charging for access.  Some examples include: hard to copy CDs, control of who is allowed to sell CDs, digital rights management in music files, and gaming the legal system to punish those who copy music.  The CD era was the heyday of the music labels. CDs were sixteen dollar objects that provided access to what is essentially a public good. Today, record labels attempt to reproduce this structure with digital rights management.
.
To control public goods in this way is an economic tragedy. Once again, imagine the loaf of bread as a public good – it is a single loaf of bread that can be copied costlessly, bringing bread to the multitudes.  Such a loaf of bread is considered miraculous.  That is exactly how MP3s work.  The corporate approach is not to celebrate the miraculous nature of this good, but instead to curb it: to make it costly to reproduce.  Therein lies the tragedy.
.
WHAT STRATEGY AM I PURSUING?
The business model of my podcast, The Lion in Tweed, is to give my music away and ask for memberships – like a public radio station.  And, like a public radio station, I will never charge for content or try to restrict access to my product. This ethos acknowledges the nature of music as a public good.  I try to appeal to the listener’s sense of community, of being part of something.  I believe that the public goods problem can be overcome if the podcast is intimate, if the listener feels a kinship with the producer, if the listener has the opportunity to support the producer. Donations are both a way to support producers and a way for listeners to feel more involved, and included.
.
This is my strategy.  I intend to document my downloads and membership carefully. I am hoping to learn more general principles about how these public goods can be produced. 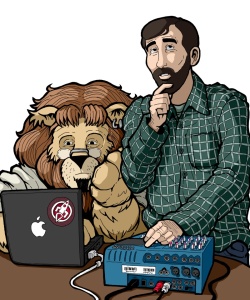 The Lion in Tweed and Peter C. DiCola, a lawyer and economist who works with the Future of Music Coalition

Andreas Duus Pape: is an economist at Binghamton University, a musician, and a regular contributor for Sounding Out!
.
Post script: Are you a musician?  These issues of compensation are very real and very important.  You can help scientific and policy research about making music by taking the Future of Music Coalition‘s “Money for Music” survey.  The survey is designed to accommodate the diverse careers of musicians in any genre, full-time or part-time, young or old.  The team has worked for the better part of two years refining this set of questions. They have interviewed musicians, talked to groups of musicians, and tested several versions of the survey.  Your participation in the survey will help the Future of Music Coalition be able to talk sensibly about how musicians in different genres are faring economically.  Here is a short video:
Here is a link to the survey itself: https://www.research.net/s/moneyfrommusic

10 responses to “Music is not Bread”