While we at SO! are just as eager as everyone else to put 2016 behind us, we can’t forget about the excellent envelope- (and button-) pushing work we served up for you last year.  So here, for your New Year’s reading pleasure, are the Top Ten Posts of 2016 (according to views).  Let’s raise our glasses one more time and let this brilliance echo into 2017! 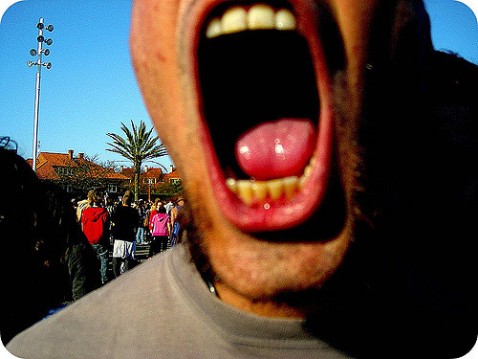 10) Gendered Sonic Violence, from the Waiting Room to the Locker Room

This past August 2016, professional “pick-up artist” Dan Bacon caused a stir with his article “How to Talk to a Woman Who is Wearing Headphones.”  The article was published on TheModernMan, a site pledging to “make [a woman] want to have sex with you ASAP.”  Bacon offers step-by-step “instructions” for pick-up artists to overcome the obstacle of being rendered inaudible by the music a woman might be listening to:

His article was criticized in articles that appeared in The Guardian, Washington Post, Slate, and other news sites, which pointed out that Bacon and his followers advocated ignoring a clear visual signifier of privacy in pursuit of sex. Not only did Bacon feel entitled to a woman’s time, they suggested, but also to an audience. What Bacon insists is “two, [sic] normal human beings having a conversation” is in fact a belief in his unilateral right to be heard. . . [Click here to read more!]

9) Listen to the Sound of My Voice

I first realized there was a problem with my voice on the first day of tenth grade English class. The teacher, Mrs. C, had a formidable reputation of strictness and high standards. She had us sit in alphabetical order row after row, and then insisted on calling roll aloud while she sat at her desk. Each name emerged as both a command and a threat in her firm voice.

“Here,” I mumbled quietly. I was a Honor Roll student with consistent good grades, all A’s and one B on each report card, yet I was shy and softspoken in classes. This was an excellent way to make teachers amiable but largely go unnoticed. The softness of my voice made me less visible and less recognizable. . .[Click here to read more!]

8) The Amplification of Muted Voices: Notes on a Recitation of the Adhan

Where do we begin?

On Tuesday January 13th, 2015, my first-year students and I gathered for the second meeting of our seminar, “Soundscapes: Artistic, Social, and Biological Approaches to Acoustic Environments.” We were just a few steps away from the iconic Duke chapel, almost in its shadow.

The chapel is an example of a revivalist architectural style known as “Collegiate Gothic.” Its steps were constructed with soft stone, intended to wear down quickly and provide an accelerated impression of age and prestige. The chapel’s cruciform blueprint is an unambiguous symbol of its Methodist Christian roots, as is the university’s motto: “eruditio et religio” (“erudition and religion”). In true Gothic revivalist style, the phrase is a Latin translation of a line from an 18th-century, English-language Methodist hymn titled “Sanctified Knowledge” . . . [Click here for more!] 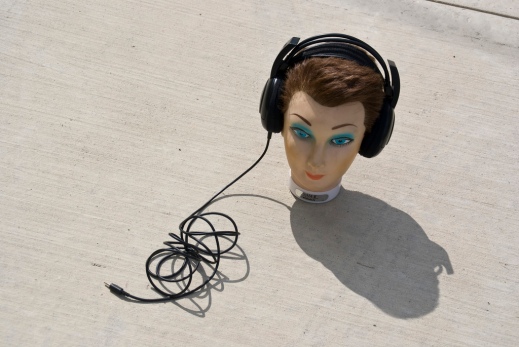 Some of the most popular early 21st century feminist approaches to pop culture are rooted in a collapse of visual and aural representations. For example, though Disney princesses have become visibly more diverse and realistic, linguists Carmen Fought and Karen Eisenhauer have compiled data showing that women characters in Disney princess films speak less in films released between 1989-1999 than they did in films released in the 1930s-1950s. Writing in Noisey in 2015, Emma Garland wonders whether we “have created an environment in which female artists are being judged only on their feminism.” Both in her own analysis and in the thinkpieces she references, that judgment addresses the verbal content of song lyrics or artists’ public statements and the visual content of music videos. Noting that “a lengthy Google search will drag up hundreds of editorial pieces about the [Rihanna’s] ‘BBHMM’ video” (The Guardian alone hosts six), but barely any reviews of the actual song, Garland illustrates just how much feminist analysis of pop music skews to the visual and away from sound and music. Popular post-feminist analysis focuses on the visual and verbal because of the influence of law and legal theory on 20th century American feminism. However, in post-feminist pop, the sound lets in the very same problems the lyrics and visuals claim to have solved. [Click here for more!]

6.) Audiotactility and the Medieval Soundscape of Parchment

As humans, we engage all of our senses in every undertaking, whether or not we consciously perceive our sensory interactions. For instance, when we consume a gourmet meal, we don’t simply taste the food—we also see it, smell it, and feel it. We might also hear it as it is being prepared and/or consumed, and the meal’s pleasure can be enhanced by conversation. Overall, our experiences are enriched (or worsened) through our multisensory engagement. Similarly, reading involves multimodal feedback. While we might think of it as solely a visual experience, both auditory and tactile interactions occur within the process. As The Handbook of Multisensory Processes (518) tells us, audiotactile (sound+touch) and visuotactile (sight+touch) interactions are of great functional importance as they link remote senses to the body. . . [Click here to read more!] 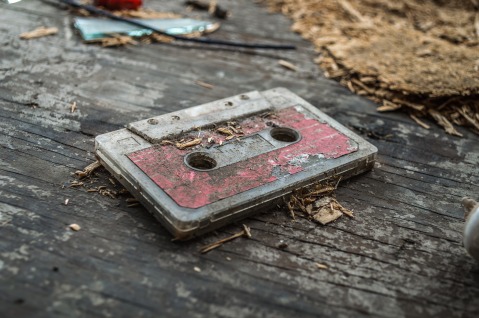 5) Tape Hiss, Compression, and the Stubborn Materiality of Sonic Diaspora

In an article for Pitchfork, music critic Adam Ward reminisces about digital music files that sound as if they’re “being played through a payphone,” and calls the extreme compression of the low-quality MP3 “this generation’s vinyl crackle or skipping CD.” The crackles, hisses, and compression that characterize such sound files are what I term “encoded materiality.”  Focusing on the encoded materiality of the digital helps us to reconfigure our approach to sonic media, understanding how the compression of early MP3s and tape hiss remind us not only of lost fidelity, but also of the richness of exchange. These warm and stubborn sonic impurities, having been encoded in our digital listening formats and thus achieving repeatability and variability, act as persistent reminders that we can think diaspora beyond melancholy and authenticity, sidestepping the questions of purity and loss that so often characterize dialogues in the field of diaspora studies. . .[Click here for more!]

A text arrives and the buzz of a cell phone jolts you from your idle thoughts. The sound–like an alarm, another kind of bell to mark out the day–shifts you from one audition to another. The spatiality of competing sounds fills our consciousness and shapes our attitudes towards music and noise, privacy and pollution. These themes surround the issue of sound and articulate a variety of questions and problems. How does one delineate between noise and sound? How does sound individualize us within the community? How does sound create space? Why is the scopic the privileged sense? . . .[Click here for more!]

Prince leaves an invitingly “messy” catalog—a musical cosmos, really—just as rich for those who knew it well as for those encountering it with fresh ears. He avoided interviews like he avoided conventions. He made few claims. Read him as you will.

We are free to interpret Prince, but not too free. Yes, art is open, and perhaps Prince’s art especially. And yet many eulogies have described him as indescribable, as if he were untethered by the politics of his world; he wasn’t. Some remembrances assume (or imagine) that Prince was so inventive that he could escape stultifying codes and achieve liberation, both as musician and human being.  For example, Prince has often been called “transcendent”—of race, of musical genre, even of humanity itself.  This is overstated; he was rooted in all of these. Better to say, maybe, that he was a laureate of many poetics, some musical and some not. He responded to race, genre, and humanity, all things that he and we are stuck with. He was a living artwork, and these, by way of sound, were his media.

Prince was not transcendent. He was just too much for some to assimilate. . . [Click here for more!]

Malcolm Gladwell, who recently wrapped the first season of his podcast Revisionist History, has been on a roll lately. Not a particularly endearing one, though. I’ve been trying to locate his nadir, but it’s not easy with so many options to choose from. Is it in the New Yorker, when he condescendingly exclaims “Of course not!” in response to whether Caster Semenya should be allowed to compete in the 800-meter at the Olympics? He follows up with the assertion that no track-and-field fan disagrees with him, as if the complexity of gender identification is somehow best left to a majority appeal. Or is it in Revisionist History’s Episode 9, “Generous Orthodoxy,” when he chides Princeton students protesting the use of Woodrow Wilson’s name around campus? Calling one student “angry”—a loaded word to lob at a black woman—and surmising she would later “regret her choice of words,” Gladwell advises the students to instead threaten to leave the university if their requests aren’t honored. Why? Because otherwise “every crotchety old Princeton alum” wouldn’t believe they actually care about the university. . . [Click here for more!]

1) How not to listen to Lemonade: music criticism and epistemic violence

With the premiere last month of Lemonade, her second visual album, Beyoncé didn’t make the world stop so much as she make it revolve: around her, around her work, around black women. For all of the limitations of pop music as a medium (it’s inherently capitalist, for one) and Lemonade’s various feminist strategies (“Formation,” with its “Black Bill Gates” language, can be heard as a black parallel public to white corporate feminism), the album nevertheless re-centered mainstream media attention on black women’s cultural and creative work.

As the conversation about Lemonade revolved around black women and black feminism, two white men pop critics writing for major publications responded with “So What About The Music?” articles. The description to Carl Wilson’s Slate piece asks “But how is it as strictly music?,” and Kevin Fallon’s Daily Beast piece asks both “But is the music any good?” in the title  and “But is the music worth listening to?” in the dec. Each time, the “but” sounds like the antecedent to its implied mansplainy consequent “actually…” And just as “but actually” recenters men as authorities and experts, these three questions decenter features prioritized in black women’s pop performance traditions, and in Lemonade itself. As posed in these two articles, the “so what about the music?” question frames “music” so narrowly that it both obscures or at best trivializes what the album does musically. Wilson and Fallon’s essays are good examples of how not to listen to Lemonade . .   [Click here for more!]

SO! Amplifies: The Women in L.A. Punk Archive