A text arrives and the buzz of a cell phone jolts you from your idle thoughts. The sound–like an alarm, another kind of bell to mark out the day–shifts you from one audition to another. The spatiality of competing sounds fills our consciousness and shapes our attitudes towards music and noise, privacy and pollution. These themes surround the issue of sound and articulate a variety of questions and problems. How does one delineate between noise and sound? How does sound individualize us within the community? How does sound create space? Why is the scopic the privileged sense?

Sound studies is the name for an interdisciplinary field encompassing the study of noise, music, vibrations, and what T.S. Eliot  called “auditory imagination” in The Use of Poetry and The Use of Criticism (111).  It is a capacious field, encompassing examinations of the individual sonic space of iPod use and the historical sound of rural and urban life. Sound (or the lack thereof) immerses a subject in worlds that may not be, or can distance the listener from the world that is. To put on headphones, to lose oneself in chant, to be awakened by an alarm, to lose the sound of voices in the crashing waves, transfers us, immerses us, and connects us in a variety of sonic worlds. 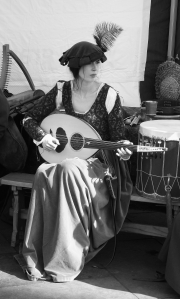 Each of the essays in this month’s “Medieval Sound” forum focuses on sound as it, according to Steve Goodman’s essay “The Ontology of Vibrational Force,” in The Sound Studies Reader, “comes to the rescue of thought rather than the inverse, forcing it to vibrate, loosening up its organized or petrified body (70).  These investigations into medieval sound lend themselves to a variety of presentation methods loosening up the “petrified body” of academic presentation. Each essay challenges concepts of how to hear the Middle Ages and how the sounds of the Middle Ages continue to echo in our own soundscapes.

The posts in this series begins an ongoing conversation about medieval sound in Sounding Out!. Our opening gambit in April 2016, “Multimodality and Lyric Sound,” reframes how we consider the lyric from England to Spain, from the twelfth through the sixteenth centuries, pushing ideas of openness, flexibility, and productive creativity. We will post several follow-ups throughout the rest of 2016 focusing on “Remediating Medieval Sound.”  And, HEAR YE!, in April 2017, look for a second series on Aural Ecologies of noise!

The essays clustered in the group “Lyric Sound” re-center lyric soundscapes—onomatopoeia, mashups, music box, witnesses to queer temporalities—in order to reorient the critical terrain of our understanding of the medieval lyric.  Recent criticism on digital rhetoric has defined multimodality as the process of creating, rather than the product. In Daniel Anderson et al’s “Integrating Multimodality into Composition Curricula: Survey Methodolgy and Results from a CCCC Research Grant” (2006),  multimodality, “acknowledges the practices of human sign-makers, who select from a number of modalities for expression (including sound, image, and animation, for example), depending on the rhetorical and material contexts within which the communication is being designed and distributed.” In this body of criticism, the term “multimedia” becomes condensed to the “integration of multiple forms of media” (59-84). 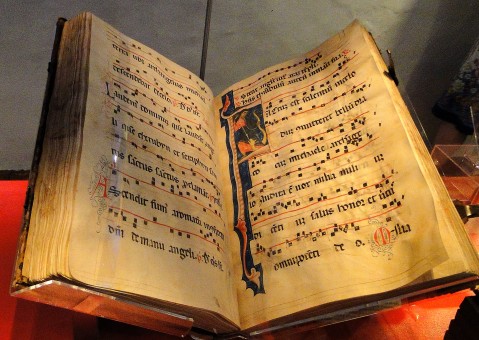 This interest in semiotics is, however, not a new one; rather, it is one that has deep roots in medieval rhetoric, especially with regard to music.  The two medieval writers most important to the discussion of rhetoric and music in the thirteenth century are John of Salisbury, particularly his twelfth-century work Metalogicon, and Gilbert of Crispin’s well-known debate Disputatio Iudei et Christiani from the late eleventh century.  John of Salisbury’s Metalogicon, lays out the relation between symbols, sounds, and notation, writing:

Letters, that is, written symbols, in the first place represent sounds (voce). And secondly they stand for things, which they conduct into the mind through the windows of the eyes. Frequently, they even communicate, without emitting a sound, the utterances of those who are absent (Book 1, Chapter 3, 59).

That such great import has existed in such tiny notations should not seem strange, for singers of music likewise indicate by a few graphic symbols numerous variations in the acuteness and gravity of tones. For which reason such characters are appropriately known as “the keys of music” (Book 1, Chapter 13, 59).

Gilbert of Crispin also considers the semiotics of visual notes. In the Disputatio Iudei et Christiani, he writes:

Just as letters stand in one way as images and notations of words, so also pictures exist as likenesses and notation of things written (qtd. in Michael Clanchy’s From Memory to Written Record 290).

Both of these writers rework material from Isidore of Seville, and both describe correlations between reading “nota” in relation to music and images in post-Conquest Britain.

The elision between writing down letters and writing down musical notes is furthered by the slippery quality of the Latin from which the term “note” is derived. The Latin word “notare” means “to record writing,” while the second most common meaning of the noun “nota” [noter] means “to sing, to interpret musically.” The resulting duality of the term “note” survives today in both English and French, as Ardis Butterfield has pointed out in a November 2009 conference paper “A Note on a Note,” writing that “a note is both a sound and a sign.”  The ambiguity of the term in Latin also indicates that the distinctions between the two meanings—“to record in writing” and “to interpret musically”—are constantly in flux.

The issues of the development of musical notation—a recording technology of sound—and the interface issues at stake in medieval manuscripts mean that our view of the medieval lyric comes primarily through the eyes. In other words, the medium—the manuscript page—in which the medieval lyric is recorded explains how our interpretations are deeply ocularcentric. However, we believe that we can think of the medieval manuscript as a flexible recording medium that allows for a “mise-en-système,” what Joanna Drucker describes as “an environment for action” in Graphesis: Visual Forms of Knowledge Production (139).  A digital mise-en-système is a digital ecology in which the main question posed is how the interface can create the subject/user/reader. Interface then becomes a “border zone between cultural systems and human subjects;” it is the co-dependent space where “speaker and spoken are created. (148, 158-59).

“The Story of the Written Word” from the NY Public Library McGraw Rotunda. Photo by Wally Gobetz @Flickr CC BY-NC-SA.

Drucker tackles the theoretical stakes of digital visuality by explaining that “all images are encoded by their technologies of production and embody the qualities of the media in which they exist. These qualities are part of an image’s informations” whether this be illuminated manuscript, daguerreotype, painting, photograph, or digital image (21). The issues of layout, marginalia, paratext, columns, table of contents, indexes, chapter headings, are as Malcolm Parkes discusses in Scribes, Scripts, and Readers, a development of the medieval scholarly book (121-142). These experimental page structures became standard in printed books and eventually in digital texts.

In this series, we push back a bit on Drucker’s idea that the manuscript page is actually just a static mise-en-page. If the codex (as it developed in the Middle Ages) is one of the earlier kinds of informational “interfaces” then we should consider it as a mediating apparatus: one in which the mise-en-page and material features, its myriad graphic cues explain how to read, use, navigate, and access information in the codex book. We argue today with the example of the medieval English lyric as it emerges, that manuscripts are functionally an interactive media ecosystem, a mise-en-système where subject/user/reader can pull different threads and create and recreate meaning.

Over the next six weeks, the writers featured in our forum on Lyric  Sound–Christopher Roman, Dorothy Kim, David Hadbawnik, Marla Pagán-Mattos, Katherine Jager--examine the different forms that medieval lyrics take and how the lyric is ensounded in terms of the mouth, recording medium, as well as the performance.  Historical sound is always about negotiating the past through the present. Silence in the Middle Ages would not be our silence, just as music or noise today may not be defined as such then. These essays ask us to listen, create, make noise, open our senses in multimodal and multitudinous ways.  We close with Andrew Albin‘s meditation on what it means to remediate medieval sounds in our contemporary moment, an intellectual call to the present as well as the future, as we will return with more on “Remediating Medieval Sounds” in April 2017.   –Forum Guest Co-Editors Dorothy Kim and Christopher Roman

Dorothy Kim is an Assistant Professor of English at Vassar College. She is a medievalist, digital humanist, and feminist. She has been a Fulbright Fellow, a Ford Foundation Fellow, a Frankel Fellow at the University of Michigan. She has been awarded grants from the National Endowment for the Humanities, Social Science and Humanities Research Council of Canada, and the Mellon Foundation. She is a Korean American who grew up in Los Angeles in and around Koreatown.

Christopher Roman is Associate Professor of English at Kent State University His first book Domestic Mysticism in Julian of Norwich and Margery Kempe deals with the creation of queer families within mystical theology. His forthcoming book Queering Richard Rolle deals with the intersection of queer theory and theology in the work of the hermit, Richard Rolle. His research also deal with quantum theory and Bede, ecocritical theory, and medieval soundscapes. He has published on medieval anchorites, ethics in Games of Thrones, and death and the animal in the works of Geoffrey Chaucer.

REWIND! . . .If you liked this post, you may also dig:
Musical Encounters and Acts of Audiencing: Listening Cultures in the American Antebellum–Daniel Cavicchi

The Amplification of Muted Voices: Notes on a Recitation of the Adhan––David Font-Navarrete