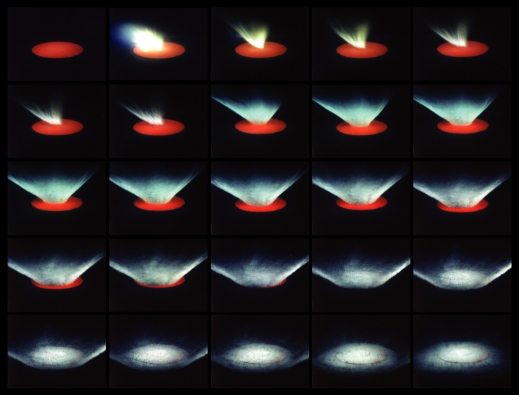 Welcome back to Hearing the UnHeard, Sounding Out‘s series on how the unheard world affects us, which started out with my post on the hearing ranges of animals, and now continues with this exciting piece by China Blue.

From recording the top of the Eiffel Tower to the depths of the rising waters around Venice, from building fields of robotic crickets in Tokyo to lofting 3D printed ears with binaural mics in a weather balloon, China Blue is as much an acoustic explorer as a sound artist.  While she makes her works publicly accessible, shown in museums and galleries around the world, she searches for inspiration in acoustically inaccessible sources, sometimes turning sensory possibilities on their head and sonifying the visual or reformatting sounds to make the inaudible audible.

In this installment of Hearing the UnHeard, China Blue talks about cataclysmic sounds we might not survive hearing and her experiences recording simulated asteroid strikes at NASA’s Ames Vertical Gun Range.

Fundamentally speaking, sound is the result of something banging into something else. And since everything in the universe, from the slow recombination of chemicals to the hypervelocity impacts of asteroids smashing into planet surfaces, is ultimately the result of things banging into things, the entire universe has a sonic signature. But because of the huge difference in scale of these collisions, some things remain unheard without very specialized equipment. And others, you hope you never hear.

Unheard sounds can be hidden subtly beneath your feet like the microsounds of ants walking, or they can be unexpectedly harmonic like the seismic vibrations of a huge structure like the Eiffel Tower. These are sounds that we can explore safely, using audio editing tools to integrate them into new musical or artistic pieces.

Luckily, our experience with truly primal sounds, such as the explosive shock waves of asteroid impacts that shaped most of our solar system (including the Earth) is rarer. Those who have been near a small example of such an event, such as the residents of Chelyabinsk, Russia in 2013 were probably less interested in the sonic event and more interested in surviving the experience.

But there remains something seductive about being able to hear sounds such as the cosmic rain of fire and ice that shaped our planet billions of years ago. A few years ago, when I became fascinated with sounds “bigger” than humans normally hear, I was able to record simulations of these impacts in one of the few places on Earth where you can, at NASA Ames Vertical Gun Range.

The artist at the AVGR

The Vertical Gun at Ames Research Center (AVGR) was designed to conduct scientific studies of lunar impacts. It consists of a 25 foot long gun barrel with a powder chamber at one end and a target chamber, painted bright blue, that looks like the nose of an upended submarine, about 8 feet in diameter and height at the other. The walls of the chamber are of thick steel strong enough to let its interior be pumped down to vacuum levels close to that of outer space, or back-filled with various gases to simulate different planetary atmospheres. Using hydrogen and/or up to half a pound of gun powder, the AVGR can launch projectiles at astonishing speeds of 500 to 7,000 m/s (1,100 to 16,000 mph). By varying the gun’s angle of elevation, projectiles can be shot into the target so that it simulates impacts from overhead or at skimming angles.

In other words, it’s a safe way to create cataclysmic impacts, and then analyze them using million frame-per-second video cameras without leaving the security of Earth.

My husband, Dr. Seth Horowitz who is an auditory neuroscientist and another devotee of sound, is close friends with one of the principal investigators of the Ames Vertical Gun, Professor Peter Schultz. Schultz is well known for his 2005 project to blow a hole in the comet Tempel 1 to analyze its composition, and for his involvement in the LCROSS mission that smashed into the south pole of the moon to look for evidence of water. During one conversation discussing the various analytical techniques they use to understand impacts, I asked, “I wonder what it sounds like.” As sound is the propagation of energy by matter banging into other matter, this seemed like the ultimate opportunity to record a “Big Bang” that wouldn’t actually get you killed by flying meteorite shards. Thankfully, my husband and I were invited to come to Ames to find out.

I had a feeling that the AVGR would produce fascinating new sounds that might provide us with different insights into impacts than the more common visual techniques. Because this was completely new research, we used a number of different microphones that were sensitive to different ranges and types of sound and vibrations to provide us with a selection of recording results. As an artist I found the research to be the dominant part of the work because the processes of capturing and analyzing the sounds were a feat unto themselves. As we prepared for the experiment, I thought about what I could do with these sounds. When I eventually create a work out of them, I anticipate using them in an installation that would trigger impact sounds when people enter the room, but I have not yet mounted this work since I suspect that this would be too frightening for most exhibition spaces to want.

Part of my love (and frustration) for sound work is figuring out how to best capture that fleeting moment in which the sound is just right, when the sound evokes a complex response from its listeners without having to even be explained. The sound of Mach 10 impacts and its effects on the environment had such possibilities. In pursuit of the “just right,” we wired up the gun and chamber with multiple calibrated acoustic and seismic microphones, then fed them into a single high speed multichannel recorder, pressed “record” and made for the “safe” room while the Big Red Button was pressed, launching the first impactor. We recorded throughout the day, changing the chamber’s conditions from vacuum to atmosphere.

When we finally got to listen that afternoon, we heard things we never imagined. Initial shots in vacuum were surprisingly dull. The seismic microphones picked up the “thump” of the projectile hitting the sand target and a few pattering sounds as secondary particles struck the surfaces. There were of course no sounds from the boundary or ultrasonic mics due to the lack of air to propagate sound waves. While they were scientifically useful–they demonstrated that we could identify specific impact events launched from the target—they weren’t very acoustically dramatic.

When a little atmosphere was added, however, we began picking up subtle sounds, such as the impact and early spray of particles from the boundary mic and the fact that there was an air leak from the pitch shifted ultrasonic mic. But when the chamber was filled with an earthlike atmosphere and the target dish filled with tiny toothpicks to simulate trees, building the scenario for a tiny Tunguska event (a 1908 explosion of an interstellar object in Russia, the largest in recorded history), the sound was stunning:

After the initial explosion, there was a sandstorm as the particles of sand from the target flew about at Mach 5 (destroying one of the microphones in the process), and giving us a simulation of a major asteroid explosion. 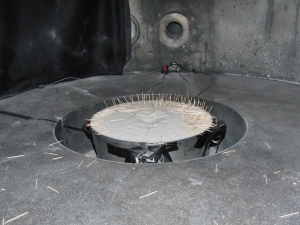 66 million years ago, in a swampy area by the Yucatan Penninsula, something like this probably occurred, when a six mile wide rock burned through the atmosphere to strike the water, ending the 135 million year reign of the dinosaurs. Perhaps it sounded a little like this simulation:

Any living thing that heard this – dinausaurs, birds, frogs insects – is long gone. By thinking about the event through new sounds, however, we can not only create new ways to analyze natural phenomena, but also extend the boundaries of our ability to listen across time and space and imagine what the sound of that impact might have been like, from an infrasonic rumble to a killing concussion.

It would probably terrify any listener to walk in to an art exhibition space filled with simply the sounds of simulated hypervelocity impacts, replete with loud, low frequency sounds and infrasonic vibrations. But there is something to that terror. Such sounds trigger ancient evolutionary pathways which are still with us because they were so good at helping us survive similar events by making us run, putting as much distance between us and the cataclysmic source, something that lingers even in safe reproductions, resynthesized from controlled, captured sources.

China Blue is a two time NASA/RI Space Grant recipient and an internationally exhibiting artist who was the first person to record the Eiffel Tower in Paris, France and NASA’s Vertical Gun. Her acoustic work has led her to be selected as the US representative at OPEN XI, Venice, Italy and at the Tokyo Experimental Art Festival in Tokyo, Japan, and was the featured artist for the 2006 annual meeting of the Acoustic Society of America. Reviews of her work have been published in the Wall Street Journal, New York Times, Art in America, Art Forum, artCritical and NY Arts, to name a few. She has been an invited speaker at Harvard, Yale, MIT, Berkelee School of Music, Reed College and Brown University. She is the Founder and Executive Director of The Engine Institute www.theengineinstitute.org.

Cauldrons of Noise: Stadium Cheers and Boos at the 2012 London Olympics— David Hendy

Learning to Listen Beyond Our Ears– Owen Marshall