Singing to my Imagined Listener

Three hours a week, I speak to a group of ninety-nine people and explain how to make choices. I talk loudly, to the back of the room, then I lower my voice to engage them more intimately. I pause and let the room grow silent. Near the end of the twice-weekly performance, I review my main points. Like a bell, this signals to my audience that they will leave soon; they begin to rustle in their chairs. I say, “Hey, I’m not done! You can’t go yet!” And they laugh. And they stay.

I am an economist and a musician. In both of my chosen fields, performance is a necessary component. As an economist, I teach and I present papers; as a musician, I put on shows. Performance is the willful construction of a series of events using the body—hands, voice, gesture—and the instruments the body can manipulate to create a particular mental state for the witnesses. In the days leading up to my next show on October 16th at The Beef in Binghamton, NY, I have pondered the intimate ways in which listening structures the corporeal nature of performance. As an economist, I understand that performance is strategic, in that I imagine a listener for my music and choose my actions to influence that listener. As a musician, I recall moments that I listened.

“Audience as available instrument in performance”

The audience is one of the instruments available to the performer. I plan to use this to my advantage at my upcoming show. When I envision my fingers first passing across my guitar, the audience will not be engaged with me: they will be talking to each other, getting a drink, finding a seat. I will play a song at a normal volume; given the other noise, it will be background, not a centerpiece. Most people will hear it, but not many will notice it. The climax of the song will involve me holding a loud, high vocal note until all other noise dies. Each person there will have a moment in which they hear that note and wonder what it is and they will grow silent. By the end of the note, every person in the room will realize that the performance has started and that this sustained note is part of a song they have been hearing but not listening to for several minutes. As the note draws to a close, they will feel compelled to shout, to clap, to exclaim. Their part in this performance—the noise, the silence, then the noise—will be one they will play without knowing, beforehand, that they were included.

I imagine this moment like the opening to Belle And Sebastian‘s “I Don’t Love Anyone:” ‘I don’t love anyone/ You’re not listening/ … I don’t love anyone/You’re not listening even now.’ As a listener, you realize as he says ‘even now,’ that he’s right: you weren’t listening. It was a transcendent moment that shocks me as a listener: the author of the song had climbed inside my head without me knowing, and then was able to name exactly the listening experience I was having.

In Chronicles, Bob Dylan describes a listening experience built around a singer who constructs her own way to view the rhythm of a song. “I’d seen [Martha Reeves] in New York … where she’d been playing with the Motown Revue. Her band couldn’t keep up with her, had no idea what she was doing and just plodded along. She beat a tambourine in triplet form, up close to her ear and she phrased the song as if the tambourine was her entire band” (160). This phrasing that is out-of-phase with the band (or the audience) reminds me of Odetta. 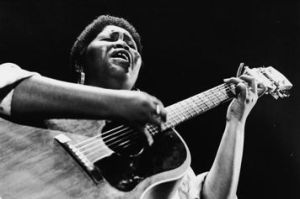 Odetta might be best known for her performance of “I’ve been driving on Bald Mountain/Water Boy.” She rebuilt those two traditional 4/4 folk songs swung onto a three-beat triplet, so what emerges is a swinging triplet where beats two and three are rushed in after a lethargic one: ONE… two three; ONE… two three; ONE… two three. After several times though the verses, she stops the guitar entirely and carries a long vocal note, setting up a moment of unnaturally long silence. The guitar and grunt that end the silence seem arrhythmic to my ear, but Odetta can sing by her own time that swings in and out of phase with the rest of us. We’re not meant to know when resolution comes, and it’s that uncertainty that Odetta wants us to experience.

I once saw Jeff Tweedy use a controlled complete silence with Wilco‘s performance of “Misunderstood” from Being There in 2001. Tweedy doesn’t use uncertainty as Odetta does; his use of silence is more akin to methodically turning on and off a bedroom light in the middle of the night. In particular, the band performs an extended outro which involves two beats of sound and two beats of silence: “NOTHING – -.” On “NAH” and “THING” the whole band is together on two identical, stinging staccato notes.

On the off beats, the entire theater is silent. When I was in the audience, it was so quiet you could have heard the audience breathe. . .if anyone had been taking a breath. On some level, I was in a state of shock, or at least, a state of being constantly startled; everyone must have been, because the silences were complete. On another level, I felt at peace. I calmly looked from face to face in the audience behind me, and everyone had the same startled, smiling expression I’m sure I had. I looked around the room–just looked, without an agenda, just idle curiosity–for the first time in what felt like years.

Seeking to recreate a combination of those listening experiences in my audience, I wrote “Something This Easy,” a song about confusing interactions with an ex. The song is forty percent silence: nineteen beats of melody followed by thirteen beats of silence. I don’t tap my foot or keep time during the silence, save for holding my breath, and I bring back the sound when I (have to) exhale. I try to keep the audience slightly and repeatedly startled by resisting any precise expectation of sound that they may hold. After a beat, the audience will break the silence when I make them laugh with the line: “I know your body like a Swedish furniture map.” With the eruption of laughter in an otherwise silent room, my audience becomes the instrument creating the music that they are listening to at that moment. That is, they are the only instrument I’m playing.

As a musician, this is the listening experience I designed: the laughter rings after I’ve triggered it like a overtone ring on a string long after having been plucked and left. As an economist, I see how I used the imagined listener successfully: I forecasted how these real listeners would react, and was able to use that forecast to design not only this moment, but potentially many others as well.

Downloadable Pape Mix of Wilco, Odetta, and his own “Something this Easy”: