Decolonizing the Radio: Africa Abroad in the Age of Independence 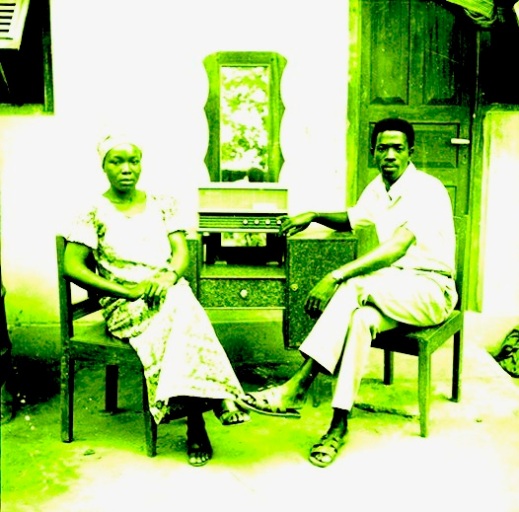 I never meant to write about radio. Film, video, music, the Internet, television even– but radio had not made a dent in my scholarship or teaching, for embarrassing reasons: it seemed nostalgic even to think about it. It was a residual technology, obsolete even at mid-century, I thought.

And then I stumbled onto the transcripts of “Africa Abroad,” part of The Transcription Centre archives at The Harry Ransom Center.

I was doing research on African American playwright Adrienne Kennedy when two of the fantastic staff at the HRC (Molly Schwartzburg, now Curator at the UVA Special Collections Library, and archivist Gabby Redwine) shared their working African Collections finding aid with me. The description of The Transcription Centre caught my eye, as a radio and public media presence across Africa and the metropolitan diaspora at mid-20th century, whose work included the short variety radio program Africa Abroad (1962-1965) as well as Arts festivals and other cultural events based in London and headed by a former BBC employee.   Africa Abroad, a variety show dedicated to the music, art, theatre, literature, and politics of Africa and the African diaspora, offers a compelling glimpse at Independence-Era Africa and some of the technologies that made it, briefly, the center of contemporary diaspora politics.

The transcripts of Africa Abroad document the progressive hope that theorists like Frantz Fanon had for the revolutionary potential of radio in the hands of the (semi)proletariat with cheap access to both production and distribution networks.  The background materials on the Centre document its inception as the brainchild of the Congress for Cultural Freedom, a CIA-funded effort to fund anti-communist, pro-democracy sentiment on the continent (a continent who was also being wooed by Russia and China at the time). Africa Abroad then stands as an attempt to rethink the relationship between politics and culture in a difficult, compromised time, self-consciously negotiating the media and mediated trade on Africa as a place and Africa as an international symbol. The radio program takes this moment of African celebrity and finds in it not teleology but proliferation, and a self-aware critique of ‘Africa’ and its public image as it is employed by the diaspora.

By the second installment of Africa Abroad on the 26th of April, 1962, what becomes the standard format of the programming emerges, one that begins to place culture as the center of diaspora identity—and politics.  There is usually a musical lead—by the 4th installment to become the same “signature tune,” “African Waltz” by Canonball Adderley)—after an announcement of the location (London) and organization of the broadcast.   The music and the site identification augurs the emphasis on the multiple and conflicting sites of the black diaspora that are performed within each episode and across the radio series as it continues, starting with an invocation of “Mother Africa”; in this particular episode, James Baldwin calls for the revision of the “American Negro” breaking free of representational binds via “the rise of Africa in world affairs,” then moving to a commentary on a Max Roach jazz piece by Nigerian Aminu Abdullahi that emphasizes the role of pan-African politics in Jazz music, then to a review of Ezekiel (later Es’Kia) Mphahlele’s book The African Image from a Nigerian literature Ph.D. in London, finally leading to a brief interview with Robert Resha, “one of the leaders for the ANC [African National Congress] which has been banned in South Africa, on the eve of his leaving London for a tour of African countries.”  This eclectic mix becomes Africa Abroad’s signature format, and its particular concerns—that of the keen recognition that the world’s eyes are on Africa anew during this period of independence, and that Africa is starting to work as a symbolic geography of hope for African America as well as Caribbean emigres to Britain—are also those that inform the rest of its run.

Two friends listen to the radio in the Ivory Coast, 1960s, image courtesy of the BBC Archives

While the range of listeners for Africa Abroad is still hazy—transcripts and recordings were made available across the continent, but there is no record of where they landed or when or if they aired—the way that even its material presence in London acted as a hub for political, literary, and cultural figures from Africa and the diaspora winds up as another meaningful site of contradiction.   The programs’ circulation of major literary and cultural figures began to construct and map the canon of African authors we recognize today as the “fathers” of the African renaissance.   That gendering is specific as it reflects the kind of access to travel, education, promotion, and connection that was required to be a recurring part of Africa Abroad’s brief run—with a limited number of women being sent to London for education in the time period, and even fewer representing those in privileged political exile.  Though what amounts to a handful of women are interviewed on the program, rarely are women writers and thinkers featured beyond actresses.  Such representation helped to solidfy a generation of African writers and politics that were defined by the questions of an elite, masculine imagination around what the continent, and art from the continent, should or could be—and this vision of diaspora art and politics circulated via the radio.

In other words, Africa Abroad was produced through and as a representation of the new celebrity of the continent, with the radio program serving as the ideal format to showcase and interrogate the global phenomenon of African Independence and as a harbinger of the postcolonial struggle for its resources that would ensue.   As independence struggles adopt and adapt new technologies into forms of “combat,” to use Fanon’s terms from “This is the Voice of Algeria,” radio moves from strictly a medium of the colonizer to a tool,  “a system of information, . . . a bearer of language, hence of message” (73).  But it is also already “obsolete” by 1962 as a residual cultural form in the Western metropole, taken over in the mainstream by television.  Hence, like the flexible political strategies of the Cold War that relied on more than just force, radio at this moment becomes both a tool of cultural revolution (and new-found global relevance) and one of stealth colonial influence.  As a program rooted in the West but disseminated across and produced by African continental interests, “Africa Abroad” maintains the complex, contradictory desire of communication post World War II that media communications could both connect us all in a progressive intimacy or hail us into, effectively, sheep.   Africa Abroad sounds out this tension in form and in content, through the radio.

As the range of scholars I’ve thankfully met post my encounter with radio attest to, this significant, one might say descendent, moment in radio history is constantly weighted by race, gender, and empire.  Ivy Wilson is working on sound and the Transcription Centre on the actual recordings of Africa Abroad.  Judy Coffin is mapping the complex work that radio did in the careers of Fanon, Simone de Beauvoir, and other intellectuals of the mid-century.   Emily Bloom is tracing BBC radio alongside modernism’s literary pathways.  This interdisciplinary community of scholars I’ve discovered alongside of radio signifies the important work being done to think through the possibilities for this medium after its dominant rise and into its political and cultural repurposing in the age of the Cold War—outside of the mainstream center at the same time that it serves to support and traverse new geographic and cultural fronts.

Featured Image: original from a BBC collection of images from the Ivory Coast, 1960s

Samantha Pinto is an Assistant Professor of English at Georgetown University.   She is the author of Difficult Diasporas:  The Transnational Feminist Aesthetic of the Black Atlantic (forthcoming from NYU Press) and is working on a new project on early black celebrity and human rights discourse.  This research on radio is part of an in-process series of articles on institutional failure in the African Diaspora, Women’s Studies, and other critical sites of progressive political desire.