As we read of the decisive Republican victories in the 2014 midterm elections we also hear that Taylor Swift has sold 1.29 million copies of her 1989 album in just a week. Does Swift’s landslide triumph, the biggest selling album of her career in a year when no other artist has sold a million copies at all, have any political implications? Or is popular culture, even at its most wide reaching, cut off now from any such significance? At least, there would be some political meaning in that.

Swift, arguably the most image-savvy popular musician since Madonna and Dolly Parton, won’t be of any direct use to us in figuring out the answer to the questions her success raises. But indirectly, she’s telling us a lot. “New money, suit and tie, I can read you like a magazine,” she sings about a potential conquest in one of her great new songs, “Blank Space.”

That’s her forte: decoding cultural (and commercial) categories and skipping between them. Parton, her predecessor in crossing from country to adult pop back in the 1970s, brought the power ballad to Nashville with “I Will Always Love You” and stressed the commonality, regardless of politics, of working women with “9 to 5.” Madonna’s deft self-framing created an insurgent position on the singles charts for women that hadn’t been there before. Swift seeks the modern feel of Top 40, the big, casual audience of adult pop, the intense allegiances of country fans—and by all indications she’s built that coalition.

If we can learn to think about how music reaches people as subtly as Swift does, we’ll have a better chance of seeing its political role in our lives. Increasingly since the late 1960s, the most popular songs have reached listeners through music formats. By that I mean, and have written a book about, the radio-defined multiplication of the mainstream into separate channels. Some, like Top 40 and adult contemporary, are spaces of crossover. Others, like country, rock, and R&B, are defined a bit disingenuously as genre spaces. But all care less to cohere musically than demographically—to secure listeners of a certain age, gender, race, or income for advertisers. That may appear crass, but the diversifying effect is that groups of people who lack a dominant political voice (minorities, women, lower income people) become the majority target audience—music must find a style, and message, which speaks to them first. I chose to call my book Top 40 Democracy in recognition of the way that formatting blurs politics and culture in the service of delivering hit singles, just as politicians since Reagan have learned to blur the two to promote policy changes. Radio programmers are sound studies experts: everything about what listeners are to hear has to be understood, implicitly, before they tune in—DJ and promotions tone of voice, acceptable singing styles, production glosses, song length, beats, and much more. The result is an intensified normality, a mainstreaming that works to make whoever is being addressed feel utterly central.

There are real limitations to Top 40 democracy, though, especially if you make a contrast with the other radio-impelled format that has impacted politics: the rightwing populism of talk radio. Hit songs, which seek the widest possible listenership, blur their meaning by definition: everybody can sing “Shake It Off” in response to an adversity. Such numbers are unlikely to provide a conduit for anger against the economic inequities produced by globalization, since their format position as global hits, winners in the big flow, is sealed in sonically. They’re one part rarefied human (diva), one part hipster subculture (really club culture, chopped syncopations), one part the subsuming of both in a New Economy entrepreneurial merger ratified by synthetic, rhetorically multicontinental production glosses – the specialty of the man Swift worked on with “Shake It Off,” Max Martin, for example, responsible for 18 number one songs since his emergence with Britney Spears in the late 1990s.

But if that’s globalization as apolitical free trade zone, you might consider the flip side to that cushioning of identity: Top 40 hits, if unlikely to produce anger against capitalism, are equally unlikely to provide a conduit for anger against immigrants: from Black Eyed Peas to Bruno Mars and Rihanna (and now, in a way, with Swift’s format immigration), pop has long been home for performers with complicated origins. When I wrote a chapter on Elton John, whose links to the British Invasion gave him thirty straight years of Top 40 hits from 1970-1999, I became fascinated by how a British Invasion became globalization, by how closeted sexuality overlapped with other forms of airbrushed identity. 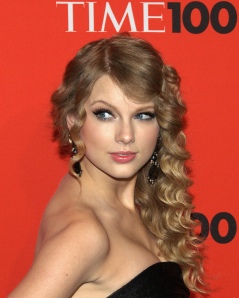 The genius, and curse, of the commercial-cultural system that produced Taylor Swift’s Top 40 democracy win in the week of the 2014 elections, is that its disposition is inherently centrist. Our dominant music formats, rival mainstreams engaged in friendly combat rather than culture war, locked into place by the early 1970s. That it happened right then was a response to, and recuperation from, the splintering effects of the 1960s. But also, a moment of maximum wealth equality in the U.S. was perfect to persuade sponsors that differing Americans all deserved cultural representation.

Since that time, as corporate creativity has favored elites, the groups of people courted by formats have been pushed to put hope in exceptional individuals rather than breakout scenes: another of Taylor Swift’s iconic antecedents is Michael Jackson, the most popular and least representative star of all. It may be that we responded so ecstatically to Beyonce’s last album because in creating a set of songs and videos around her marriage and family she was giving us a symbolic collective, however circumscribed. Pop music democracy too often gives us the formatted figures of diverse individuals triumphing, rather than collective empowerment. It’s impressive what Swift has accomplished; we once felt that about President Obama, too. But she’s rather alone at the top.

Eric Weisbard is the author of Top 40 Democracy: The Rival Mainstreams of American Music (University of Chicago Press), organizes the EMP Pop Conference, and is an Assistant Professor of American Studies at the University of Alabama.

Karaoke and Ventriloquism: Echoes and Divergences–Karen Tongson and Sarah Kessler