Sounding Out! Podcast #59: Soundwalk of the Women’s March, Santa Ana 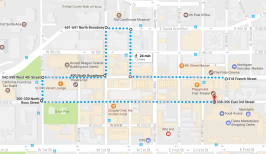 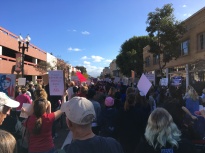 WOMEN, UNITED, WILL NEVER BE DEFEATED!

As reported by the statistics gurus at fivethirtyeight.com, almost half a million people marched in Washington and Los Angeles each on Saturday, January 21st 2017. New York City reported 400,000 folks in attendance at their own march and Boston, Chicago and Seattle each tallied over 100,000 people in their streets. Just south of Los Angeles, I attended the Women’s March in Santa Ana where 12,000 folks took to the streets with signs and pussy hats in support of civil rights. As friends to my side chanted along with the crowd, I documented the aural contours of the event with my recorder. Here it is, for posterity’s sake, a soundwalk of the women’s march in Santa Ana, CA.

WOMEN, UNITED, WILL NEVER BE DEFEATED!

Co-Founder and Multimedia Editor Aaron Trammell is an Assistant Professor of Informatics at UC Irvine. He earned his doctorate from the Rutgers University School of Communication and Information in 2015 and was a a Provost’s Postdoctoral Scholar for Faculty Diversity in Informatics and Digital Knowledge at the Annenberg School for Communication and Journalism at the University of Southern California from 2015-2016. Aaron’s research is focused on revealing historical connections between games, play, and the United States military-industrial complex. He is interested in how military ideologies become integrated into game design and how these perspectives are negotiated within the imaginations of players. He is the Co-Editor-in-Chief of the journal Analog Game Studies and the Multimedia Editor of Sounding Out!

Featured image taken before the Yost Theater in Santa Ana, image used with permission by the author.

5 responses to “Sounding Out! Podcast #59: Soundwalk of the Women’s March, Santa Ana”