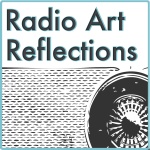 This week Sounding Out! is proud to present the first post in Radio Art Reflections, a three part series curated by radio artist and senior radio lecturer at Canterbury Christ Church University Magz Hall. Focusing on innovative approaches to radio art, the series will bring together three leading practitioners who have been researching the field from Canada, Australia and the U.K.

We begin with a fascinating exploration of “transmission ecologies” in recent works in Chicago, Iceland and elsewhere, written by Canadian sound and radio artist Anna Friz — one of the most exciting radio artists working today — who discusses how transmission art has shaped her practice.

From the early avant-garde Futurists to present-day, utopian dreams litter the history of art meeting technology. When it comes to radio and wireless, these often include the dreams that each new technology will conquer space and time; that the overcoming of distance will enable the symbiosis of human with machine and the union of self with other, while the overcoming of time will bring about a simultaneity of experience. For many radio and transmission artists (myself included), our work with so-called “trailing edge” media seeks to critically engage these myths, positing wireless transmissions instead as time-based, site-specific encounters between people and devices over distances small or large, where the materiality of the electro-magnetic spectrum is experienced within a constantly shifting transmission ecology in which we all, people and devices, function.

If one hallmark of radio art is the desire to appropriate broadcasting by rethinking and re-using technologies of transmission and reception in service of crafting new mythologies and futures for the medium. Artists have long questioned the policies and norms established by state and market around radio broadcasting which delimit experimentation and autonomous practices. Bertolt Brecht‘s call in 1932 for radio to exceed its one-to-many broadcast format in favor of a democratized, transceptive (or many-to-many) medium still resonates with contemporary artists and activists alike. What else could radio become, we ask, if not only a disseminator of information and entertainment, acoustic or digital? If radio so far has largely acted as an accomplice in the industrialization of communications, artistic appropriations of radio can destabilize this process with renewed explorations of radio and electromagnetic phenomena, constructions of temporary networks small or large, and radical explorations of broadcast beyond the confines of programming and format norms.

My first transmitter, built on the Tetsuo Kogawa model, as modified by Bobbi Kozinuk, 1998;

Curators, producers and art historians typically describe radio art as the use of radio as an artistic medium, which is to say, art created specifically for the technical and cultural circumstances of broadcast, and which considers these circumstances as artistic material. Today these circumstances have exceeded terrestrial broadcast to include satellite, online, and on-demand forms; similarly radio art has also expanded to include sprawling telematic art exchanges, online podcast series, and unlicensed temporary interventions into the radio dial. As a further reclamation of radio as a medium, many artists pull radio out of the studio to create installations, performance works and public actions which consider not just the act of transmission or the creation of artistic content, but also the material aspects of the electro-magnetic spectrum, and the circuits of people and devices which activate and reveal them.

Japanese media theorist and artist Tetsuo Kogawa describes broadcast radio art as art radio, where art is the content of a transmission. By contrast, radio art involves directly playing with electro-magnetic waves as the artistic medium. Galen Joseph-Hunter of Wave Farm further expands Kogawa’s formulation of radio art with the term transmission art, so as to include audio visual broadcast media and artistic activities across the entire electro-magnetic spectrum, such as work with Very Low Frequency (VLF) and Extremely Low Frequency (ELF) waves, or high frequency wireless networks. These definitions of radio and transmission art emphasize that radio is not a container for content, but is defined as relationships between people and things, occurring in the context of the electro-magnetic spectrum within a transmission ecology.

I apply the term transmission ecology in reference to both the symbolic spaces of cultural production such as a radio station, and to the invisible but very material space of dynamic electromagnetic interactions, both of which feature the collaboration between people and things. Transmission ecology asks more than “who owns the airwaves” by questioning the shifting relationships between all actors in the environment, from human to device to localized weather system to nearby star, and thus is not defined by homeostasis but by constant change. These relationships also support a theory of technology where people are not the absolute controllers of things, but where a push and pull of collaboration occurs within complex material and cultural environments.

Photo of Respire by Anna Friz, a large installation of radios from Nuit Blanche Toronto, 2009.

All activities in the electro-magnetic spectrum form ecologies in relation to one another conceptually, performatively, and materially. Consider the Radia network, an international alliance of independent radio stations who share radio art programming as an alternate transmission ecology within the broader culture of private broadcast radio stations. Another kind of ecology is formed by radio receivers all playing the same station diffused across countless cars and households, as they function in relation to other kinds of wireless devices and electronic systems nearby. Such a muster of receivers can be physically brought together, for instance, in a multi-channel radio installation, to reveal the complex relationships among devices, as each receiver also becomes a sender by electronically effecting its neighbor. A mobile phone receiving wireless internet likewise functions within the instability inherent in the surrounding transmission ecology shaped by all aspects of the built environment, such as the electrical grid and other urban infrastructure, as well as weather or time of day or solar flares. Human bodies and devices alike register the invisible electromagnetic activity that surrounds us as physical, measurable, and affective.

With this in mind consider radio art as occupying “radio space,” a continuous, available, fluctuating area described by the reach of signals within overlapping fields of influence and the space of imagination that invisible territory enables. The extrasensory nature of radio space allows for a productive slippage between real material signals and audible imaginary landscapes. Many radio art and transmission art works specifically draw attention to the transmission ecology in order to question the naturalization of mainstream communications systems, the normalization of practices within those systems, and the pervasiveness of electrical infrastructure, proposing alternate narratives and experiences.

So what is some of this work like? In the past year I have had the pleasure to work with Chicago-based Radius, an experimental radio-based platform which curates monthly episodes broadcast locally using the Audio Relay Unit, an unlicensed autonomous low-watt FM radio transmitter system developed in 2002 by Temporary Services and the Intermod Series. Radius neatly unites radio and transmission art by embracing the production of artistic content for broadcast, sampling existing content for artistic expression, and artistic use of the electro-magnetic spectrum generally. Radius functions as an intermittent exhibition space and as an intervention into the predictable daily grind of the FM dial. Artists compose their pieces specifically for the interference-prone radio space where their work may only be heard in fragments, as the instability and fluctuations of the relatively small Radius signal in relation to the big commercial stations broadcasting from downtown all form the context for experiencing the radio art works. Radius broadcasts one episode per month, on a schedule determined by the artist, with pieces varying in length and repetition, and some following a strict schedule related to cosmic or social timing.

Photo of my private transmitter + antenna pointing out the window in Seydisfjördur, Iceland

Recently I crafted an episode for Radius while on an artist residency in Seydisfjördur, Iceland. The town was the site of the first trans-Atlantic telegraph link between Europe and Iceland in 1906, which was also the year that Reginald Fessenden first broadcast a human voice over radio from his workshop in Brant Rock, Massachusetts. Iceland is remote enough that the electro-magnetic ‘pollution’ from human signal activity is notably absent, and located far enough to the north that in October the light disappears rapidly, so that each day loses eight minutes of daylight. The piece was called Radiotelegraph, a beacon crafted from spoken morse code and sampled signals, then sent from north to south, simulcast on my own low-watt FM transmitter in Seydisfjördur at sundown each day as well as on Radius in Chicago. The transmission marked time passing, beginning earlier each day as it followed the path of the sun. My intention was not to overcome but to experience and recuperate distance through the relation of a remote radio outpost to another minor outpost further south within a metropolis; to hear distance and feel it; to understand that distance, however finite, is a necessary condition for communication and relationship, and that distance is the key ingredient of situated, time-based, spatialized sonic experiences. 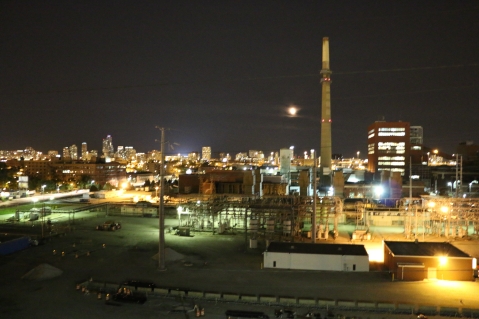 Power station across the parking lot from the Radius studio at MANA Contemporary, Chicago

As part of a recent yearly theme on “Grids” Radius tackled the electro-magnetic field space of the city by inviting four artists to create new works to be performed near power stations. In his piece electrosmog, Canadian artist Kristen Roos utilized a high frequency receiver to sonify signal activity in the 800 MHz – 2.5 GHz range, which includes mobile phones, wireless phones, wifi, and microwaves. His site-specific performance took place overlooking the Fisk Generating Station in Chicago, and included microwave ovens and micro-watt transmission to a sound system made of radio receivers. Thus the work was site-specific to both the transmission ecology of urban Chicago and the field effects of the electrical grid, mixing material signals with a speculative approach as to what the cumulative effects of living in this built environment characterized by centralized power could be. In Roos’ work, radio space contextualized and revealed the real–though naturalized and often invisible–relationships between people, things, and systems, where a microwave oven gestured at both danger and musicality.

Listen to the Roos piece here:

Kristen Roos’ set up for his Grids performance

These radio art works enact places in radiophonic space, and experiment with transmission to question the status quo of how the airwaves are controlled and used. As radio trickster Gregory Whitehead notes, it is position, not sound, that matters most with regard to radio. Artists remain committed to making radiophonic someplaces, however temporarily constructed, inhabited by interpenetrating and overlapping fields and bodies.

Anna Friz is a Canadian sound and radio artist who specializes in multi-channel transmission systems for installation, performance, and broadcast. Anna holds a Ph.D. in Communication and Culture from York University, Toronto, and recently completed a post-doctoral fellowship in the Sound Department at the School of the Art Institute of Chicago. She has performed and exhibited widely across North America, South America, and Europe, and her radio art/works have been heard on the airwaves of more than 25 countries. She is a steering member of the artist collective Skálar |Sound Art | Experimental Music based in Iceland.