When I heard of people flocking to recreate “Gatsby Dress” costumes for Halloween 2013, I couldn’t help but ponder the seemingly-perpetual cultural allure of F. Scott Fitzgerald’s The Great Gatsby, particularly its latest cinematic incarnation in spectacular Baz Luhrmann-style. More than a little of the momentum of the recent revival, however, had everything to do with the film’s soundtrack–executive produced by Jay-Z (who also executive produced the film)–that drew heavily on hip-hop.   This sonic move was not without controversy, however, sparking intense debate when the film was released in May 2013.  Take this line from Vice Magazine’s UK music blog Noisey (from a post snarkily entitled “Who Let The Great Gatsby Soundtrack Happen?”) that describes Kanye West and Jay-Z’s Watch the Throne album, from which many of the film’s songs are taken, as “a record that couldn’t be further removed from West Egg than a pauper trying to gain access to a Gatsby soiree.” This statement reveals more about this particular listener than it does about either the record or the film, which are intimately connected through the labor of Jay-Z and what I theorize here as a “sonic hip hop cosmopolitanism.”

I’ll admit that when I was first hip to The Great Gatsby my junior year of high school, I thought it was boring and couldn’t stand Tom or Daisy Buchanan or their rich white folk problems. I rooted for Jay Gatsby but couldn’t for the life of me understand why he was so sprung over Daisy, who wanted her daughter to be a “beautiful little fool” (17).  But as I got older, I found myself returning to the novel time and time again, coming back to Gatsby like a forlorn lover and reconsidering what Jay Gatsby’s character represents: unrequited love, American idealism,  (capitalistic) hustle, and (white) masculine performance. However, I’ve always been part of the camp that secretly hoped Gatsby was a black man passing for white, yearning for a life – and a woman – out of his grasp no matter how much “new money” he acquired.

It was not until Baz Luhrmann’s film adaptation of Gatsby that I realized how hip (hop) Gatsby really could be. 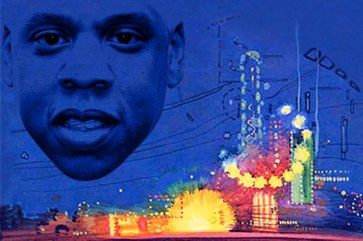 Image from Vulture’s “Quiz: Jay-Z Lyric or Line From The Great Gatsby?”

Luhrmann’s modernization of classic literary texts is not new; Romeo + Juliet (1996) got me through high school readings of Shakespeare’s play in ways Sparknotes could not. While Shakespeare’s words remained intact, the scenery and aura of the play burst to life on the big screen. Luhrmann uses in that film sonic cues of contemporary (youth) popular culture to make Shakespeare’s characters relatable. Verona is a hip, urban hub of violence that vibrates to grunge and pop artists such as Garbage, Everclear, and Quindon Tarver instead of mandolins and harps. The grittiness of grunge rock signifies the grittiness of Verona street life while Quindon Tarver’s angelic voice signifies the innocence and vulnerability of (first) love.

But Luhrmann’s Gatsby takes it up a notch, looking to hip hop culture as a bridge between the roar of the 1920s and the noise of the present.  Aside from the literal presence of hip hop sound – mostly snippets from Jay-Z and West’s Watch the Throne – the materiality of hip hop sound also serves to update the Gatsby narrative. Consider how Gatsby’s parties are loud and bass-filled with a live jazz band. The loudness of the party and “surround sound” stereo sound of the film amplifies the vibrancy of the Jazz era while drawing in the audience with a contemporary interpretation of live parties seen and heard in contemporary hip hop culture. “The question for me in approaching Gatsby was how to elicit from our audience the same level of excitement and pop cultural immediacy toward the world that Fitzgerald did for his audience?” Luhrmann told Rolling Stone. “And in our age, the energy of jazz is caught in the energy of hip-hop.”

The film itself is stunning: vividly colored with panoramas and ground shots of New York City, Luhrmann’s film draws in an audience possibly unfamiliar with Fitzgerald’s novel. The film utilizes the more traditional jazz aesthetic that captures the novel’s initial element, but invokes hip hop to span a generational divide and update the (black) cool factor of the film. Indeed, both jazz and hip hop best signify black cool and its commodification into mainstream white America. For example, Norman Mailer’s discussion of the white hipster and Jazz aficionado as a “white Negro” is also tantalizingly useful in thinking of Gatsby as a black man passing for white. His affinity for Jazz and throwing jazzy parties incites the probability of Gatsby’s racial and social background. The film uses sound to create a hybrid of timeless black cool, while highlighting the presence of African Americans’ contributions to American culture. Hip hop’s birthplace and the portal for many immigrants into America, New York is arguably America’s most mythological city, grounded in both white and African American culture memory as such. Jay-Z’s own mythic rise to fame, wealth, and power in New York City–exemplified in some lines from 2009’s “Empire State of Mind,” “Yeah I’m out that Brooklyn, now I’m down in TriBeCa/ Right next to De Niro, but I’ll be hood forever/ I’m the new Sinatra, and since I made it here/I can make it anywhere, yeah, they love me everywhere”– grounds the film’s rags-to-riches mystique.

In addition to such extradiegetic associations,  the film’s soundscape itself enthralls, with brassy, lively instrumented notes of jazz – which carried the sonic narrative of the 1920s – sounds of the hustle and bustle of urban spaces, particularly New York City, and hip hop. The film’s soundscape presents a hybrid of sonic black identities – jazz and hip hop – and uses their blended aesthetics to speak to the continued framework of black popular culture as a gauge of Americanism. In other words, the marginalized perspective is used to decide whether or not something is authentically American or not. 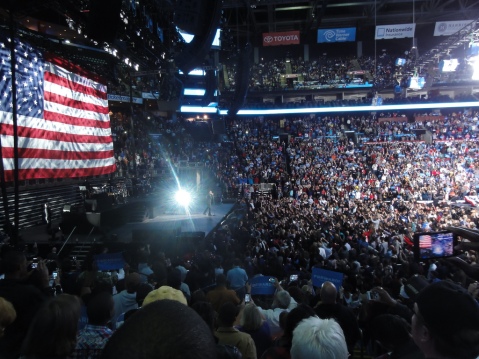 Hip hop aesthetics bridge old New York with the current New York as a foundation of Americanness. Gatsby bridges the old adage of New York as a space of opportunity with the familiar New York adage that Harlem-born and Mt.-Vernon-raised P. Diddy drops in Jermaine Dupri’s “Welcome to Atlanta,”  “if you can make it here, you can make it anywhere,”a call back to Sinatra’s “New York, New York”  that is also echoed by Jay-Z  that forms a foundational trope of the film and the novel.  A particular striking example of the merging of these adages is a scene in the novel where Nick and Gatsby are on their way to the city. They pass a car with black passengers and a white chauffeur:

As we crossed Blackwell’s Island a limousine passed us, driven by a white chauffeur in which sat three modish negroes, two bucks and a girl. I laughed aloud as the yolks of their eyeballs rolled toward us in haughty rivalry.

“Anything can happen now that we’ve slid over this bridge,” I thought; “Anything at all” (69).

While the novel does not describe a sonic accompaniment to Carraway’s observation of the black folks in the limousine, there is an inherent understanding of the “modish” fashion of the black folks as jazzy, as cool. In the film, there is an audible sound associated with the black folks. They are sipping champagne and listening to Watch the Throne. Although visibly symbolic of the 1920s – dressed in zoot suits and flapper dresses – the aural blackness associated with the scene suggests a merger of jazz and hip hop cool and cosmopolitanism.

In order to understand how hip hop updates the struggle for realness, entitlement, and respectability in the Gatsby film, it is important to return to the major sonic influence of the literal hip hop sound in the film: Jay-Z and Watch the Throne.  Jay-Z’s work on the album raises questions of how hip hop culture impacts not only the American dream but the aspirations of mogul-dom seen and heard in the film and novel. Christopher Holmes Smith’s discussion of hip hop moguls in Social Text (Winter 2003) is particularly useful in teasing out the implications behind the hip hop mogul and such figures’ social-cultural responsibility to their respective communities. Holmes Smith argues:

The hip-hop mogul bears the stamp of American tradition, since the figure is typically male, entrepreneurial, and prestigious both in cultural influence and wealth.  The hip-hop mogul is an icon, therefore, of mainstream power and consequently occupies a position of inclusion within many of the nation’s elite social networks and cosmopolitan cultural formations (69).

Jay-Z’s status as a hip hop mogul – serving both as a creative talent and corporate backer – lends credence to thinking about hip hop as a space of entitlement and a site of  struggle to attain that entitlement.  It is from this perspective that I think of Gatsby as a hip hop figure/mogul: his working class background, hyper-performance of white privilege, materialistic pursuit of wealth for visibility, and desperate need for approval as “authentic.” To borrow from rapper Drake, Gatsby “just wanna be successful.”

Mark Anthony Neal’s discussion of Jay-Z as a hip hop cosmopolitan figure in Looking for Leroy (2013) further enables an understanding of how Jay-Z lends his (sonic) hip hop cosmopolitanism to sonically navigate between hip hop’s working class aesthetics and his own sense of entitlement because of the way he mobilized those working class experiences to become wealthy. While the film does have performances by artists who are not considered hip hop – i.e. Lana Del Rey, Jack White, and Florence+the Machine – Jay-Z’s use of his own raps, including tracks from the Kanye West collaboration Watch the Throne suggests a “sonic hip hop cosmopolitanism”  complements any sense of the film as a case study of white entitlement.  Tracks like “100$ bill,” “No Church in the Wild,” and “Who Can Stop Me” both prop up and tear down Luhrmann’s visual rendition of Fitzgerald’s critique of the uppercrust of America as corruptibly entitled.

Baz Luhrmann’s adaptation of The Great Gatsby is an intriguing and useful tool through which to analyze the (in)consistencies of race and cultural authenticity in the United States. Both jazz and hip hop exist in the interstitial spaces that lie between black cultural expression and white entitlement to those expressions. Luhrmann uses hip hop’s sonic and cultural aesthetics to pump up the capitalistic and all-American narrative of “pull yourself up by the bootstraps” narrative in Gatsby by also declaring, “get yours by any means necessary.”

“I Like the Way You Rhyme, Boy: Hip Hop Sensibility and Racial Trauma in Django Unchained“– Regina Bradley