Today’s post from Damien Keane marks the first in our recurrent series, “Live from the SHC,” which will broadcast the research of this year’s Fellows at Cornell University’s Society for the Humanities,  directed by Timothy Murray, whose theme for 2011-2012 is “Sound: Culture, Theory, Practice, Politics.”   The Society’s Fellows study a diverse range of sound studies topics: the relationship between sound and urban space, the moment when musical sound enters (and exits) the body, the sound of popular culture in interwar Egypt, the role of sound in constructing pious Muslim communities in secular European countries, and the manipulation of sound by “circuit benders”–to name just a few of the projects being researched up at the A.D. White House (To see the full list of Fellows, click here.  To see the slate of SHC courses being taught at Cornell this year, click here).  To allow our readers the opportunity to listen in to the goings on at the SHC, Sounding Out!‘s correspondent on the inside, Editor-in-Chief and SHC Fellow Jennifer Stoever-Ackerman, will be curating the online conversation amongst the fellows about their current research (and, of course, their sonic guilty pleasures)–so look (and listen) for it on selected Mondays from now through May 2012. –JSA 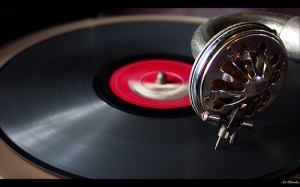 Anyone remember these? "Gramophone" by Flickr User My Little Finger

I began asking my students how many of them had turntables almost nine years ago, when, as a graduate student teaching a course on the twentieth century, I found myself seventy pages into Dracula and having to explain what a phonograph is: then, only one or two hands went up, or half-up, in response to the question. A year ago, when I put this question to students in a course on modernism, fully two-thirds of the thirty-five students in the room raised their hands – although more than a few of them also believed that Steve Jobs had invented the mp3. Even allowing for self-selection and/or misrepresentation on their part, and for a soft form of administrative research and/or miscounting on my part, this swing is quite dramatic.

But what I find intriguing about the uptick is how it tracks with an equally dramatic rise in the use of a kind of allusion in commentaries about the effects of digital media on education. I am referring to those parenthetical asides that so often follow mention of residual technologies such as turntables and albums (e.g. “anyone remember those?”). While these asides are delivered in the manner of a stand-up comic doing material about blind dates or the post office, they serve to euphemize powerful attitudes about technology and what it is to be modern that are even less funny than such shtick, perhaps most directly by assuming the unqualified and unimpeachable newness of the present. Asking if anyone remembers the record player – or the chalkboard or the library or the secretarial staff – takes for granted that you’ve already taken it to the next level, having left off your turntable with parietals and rumble seats. 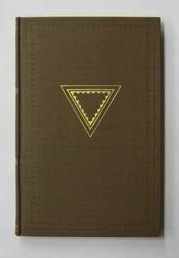 The limited edition of Joyce's _Anna Livia Plurabelle_ (1928). All further images by the author, Damien Keane

Which brings me to the gramophone recording that James Joyce made of the ending of Anna Livia Plurabelle, an episode of what would eventually become Finnegans Wake. Joyce had begun publishing pieces of his work in progress in 1924, and the Anna Livia Plurabelle section was by far the most visible of these, having appeared in several variant forms by the turn of the decade. Among these were its publication as a stand-alone, limited edition book in 1928, and the release of the recording that had been made at C.K. Ogden’s Orthological Institute in Cambridge, as a double-sided twelve-inch gramophone disc in 1929. Each did surprisingly well, and in tandem they helped to secure acceptance of Joyce’s formally challenging aesthetic procedures among readers. Indeed, some in the literary field, such as T.S. Eliot, hoped that recordings of authors’ readings would soon supplant, or at least augment, the market for limited and deluxe editions. 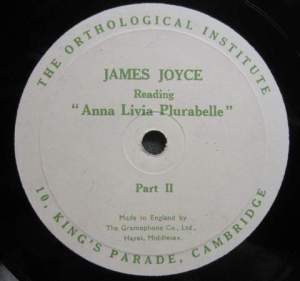 The label for side 2 of ALP gramophone recording (1929)

The fact that recordings did not replace books would be of little interest now, were it not for the way that their relationship in 1929 neatly conjures the supposedly defining trait of our own moment: the demise of one media epoch and the emergence of another (and with economic catastrophe at hand, too). Yet it is the gramophone recording – the “new media” format of that past moment – that is considered thoroughly obsolete today. What then can be said about the “listening history” of the recording? How has the sound of Joyce’s recorded reading interacted with perceptions of the readerly difficulty of the text, which, whether rightly or wrongly, are the pre-eminent “mode” through which readers approach Finnegans Wake? Put simply, if reading the text is hard, is listening to a recorded reading of that text hard? 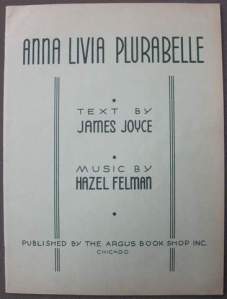 The front cover of Hazel Felman’s setting of ALP (1935)

In thinking about these questions, what catches my attention is the slippage between different senses of “difficulty,” between the positive inflections of literary difficulty and the negative connotations of sonic interference. Contemporary listeners tend to emphasize the crackles and pops that compete with the sound of Joyce’s voice and its language, and thereby locate the “difficulty” of the recorded reading in the sound of the recording itself. It is as though the recording medium actually impedes access to Joyce’s language or somehow imposes itself between the listener and his voice – despite the fact that the medium enables this access in the first place. This is to say, the “low” fidelity of the recording of Joyce’s voice simply cannot reproduce the literary experience of Joyce’s prose, that most elusive, or rarified, object of speculation. (Is it the singularity of literature or is it Memorex?) Today’s default reaction to the recorded reading might be juxtaposed to a much earlier response, Hazel Felman’s setting of the very end of the passage for piano and voice, published in 1935. Here is her explanation of the genesis of her composition:

The emotional reaction I experienced on hearing a recording which James Joyce made of the last pages of ANNA LIVIA PLURABELLE was profound. As I listened to the record time and again, the conviction grew upon me that if I could re-create in music the mood that the author creates when he reads the closing chapters of ANNA LIVIA PLURABELLE, I would be justified in translating into a musical idiom what already seemed to be sheer music. 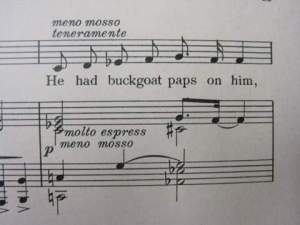 A Close-Up of Felman's Music

Felman’s response pivots on the aural clarity of the Anna Livia Plurabelle recording – she notes, for example, that D is used as a pedal point in the setting because Joyce’s voice modulates around a pitch of D in the recording – and the “sheer music” she heard there was mediated by that very recording. 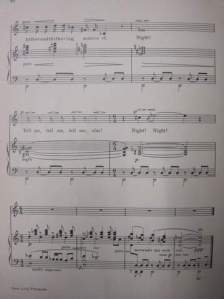 The ending of Felman’s setting, including D pedal points.

Almost eighty years after Felman, today’s hi-fi listeners more often hear in the recording only a poor realization of Joyce’s text, a judgment that has nothing to do with Joyce’s performance and everything to do with the grossly uneven staking of the recording’s semiotic content against  its materiality. Yet we do well to recall that surface noise is just as “modernist” as Joyce’s innovative prose. Why do we always forget that? To ask this question brings us back to turntables and students. (Anyone remember them?)

Damien Keane is an assistant professor in the English department at the
State University of New York at Buffalo. He is nearing the completion of
a manuscript entitled Ireland and the Problem of Information.