The Sounds of Selling Out?: Tom Zé, Coca-Cola, and the Soundtrack to FIFA Brazil 2014 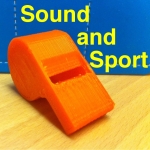 Welcome back to our summer series on “Sound and Sport.”  In today’s post, Kariann Goldschmitt discusses the gamechanging controversy over Brazilian musician Tom Ze’s commercial for Coca-Cola’s FIFA 2014. For an instant replay of July’s post click Josh Ottum‘s “Sounding Boards and Sonic Styles: The Music of the Skatepark” or of June’s post, click Tara Betts‘s “Pretty, Fast, and Loud: The Audible Ali.” For May’s post, click Melissa Helquist‘s “Goalball: Sport, Silence, and Spectatorship.”  This Thursday’s grand finale will continue our discussion of Brazil, with a podcast by Andrea Medrado entitled “The Sounds of Rio’s Favelas: Echoes of Social Inequality in an Olympic City” AND keep you on the edge of your seat with a bonus Olympic doubleheader post excerpted from David Hendy‘s recent Noise broadcasts for BBC Radio 4 on the sounds of Olympic crowds. And now. . .the sounds of FIFA’s sponsors. —J. Stoever-Ackerman, Editor-in-Chief

Tensions in Brazil have been running high as the the country ramps up preparations for next year’s FIFA World Cup. Brazil’s economy is one of the world’s strongest, but its middle class has suffered as economic growth has stagnated amid rapidly rising costs of living. Yet, FIFA demands that Brazil’s government spend large amounts of money to renovate stadiums and further bolster tourism-based services at the expense of everything else. This last June, news of another hike in transit fees was the final straw for many citizens and they took to the streets to protest corruption and the routing of public funds to tournament preparations while basic services suffered. Protesters argue that the country is burnishing its international brand on the backs of its citizens. It is thus no surprise that much of the Brazilian public is fed up with FIFA and its multinational partners. As a consequence, musicians who participate in World Cup-related ad campaigns risk damaging their relationship with the public.

In Spring 2013, the Facebook page of one of Brazil’s most eccentric musical iconoclasts, Tom Zé, was bombarded by negative comments. Unforgivably to some of his most ardent fans, Zé had lent his vocal talents to a Coca-Cola commercial that sought to connect Brazil’s oft-mythologized cultural diversity to the universals of the World Cup and Coca-Cola’s alleged populism. Zé inflected his delivery of the ad copy with an especially musical speaking cadence and rhythm. It was a peculiar take that drew on his signature vocal eclecticism.

The ad opens with Zé stating,

[Many people are asking themselves what this cup will be like

as the shot features a group of people smoothing out a giant kite with the Brazilian flag. There is a strong syncopated rhythm to Zé’s voice that matches the carnival samba drums (especially the caixa) that accompany the ad throughout. As it continues, the imagery matches what Zé describes, in either stills or brief shots, often recalling the frenzy surrounding world cups of the past. In a rapid cadence, he says:

[it won’t be the Cup of the vuvuzela, the psychic, nor of celebrity

of beautiful women, nor of players with fashionable hair]

The synchronization of Zé’s rapidly rhythmic delivery over archetypal images of Brazil’s tournament excitement is crucial to the ad’s message. This passage mentions two icons of the 2010 tournament, the vuvuzela and the psychic (vidente) octopus, with accompanying images. In under four seconds, the camera jumps from a man holding a celebrity magazine (celebridade), a woman cheering (menina bonita), some player figurines (jogadores) and a boy with an elaborate buzz cut.  By aligning himself with an official sponsor of the upcoming tournament through ad copy that valorizes Brazil’s present, Zé also lent the sound of his voice to the sports-industrial complex, thereby opening himself up to accusations that he was a  “sell-out” (vendido). 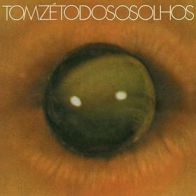 Zé is famous for taking part in the tropicália of the late 1960s – a cultural movement that was most effective through popular music. Tropicália musicians bucked Brazilian musical conventions by blending imported rock ‘n’ roll with national music protest songs during a period when musical taste often indicated one’s support or disapproval of the military dictatorship. While most involved in tropicália eventually became Brazilian musical mega-stars (Caetano Veloso, Gilberto Gil, Gal Costa, Os Mutantes, and Mara Bethânia), Zé drifted to obscurity by rejecting many of the machinations of the record industry. He only found an international audience when David Byrne’s Luaka Bop Records released some of his music in the 1990s, the most successful of which was Fabrication Defect [Com Defeito de Fabricação] (1998). Due to his peculiar status, Zé disrupted fan expectations and threatened his brand when he embraced a corporate power so intricately connected to an increasingly unpopular athletic tournament.

The controversy surrounding the Coca-Cola ad took a turn towards farce when, on April 22nd, 2013, Zé released a free 5-song EP on his website titled Tribunal do Feicebuque – a clear play on the way that Brazilians tend to pronounce “Facebook.” Accompanying the songs was a parody of tribunal orders listing the performing and collaboration credits along with lyrics to the songs. Zé’s actions exposed how the incident was a different kind of sonically-driven sports spectacle – this time it was played out over social media, in Brazil’s most influential newspaper, in Tribunal references and fights with fans during his shows at Rio’s famed Circo Voador, and in the ensuing blog reviews of his shows.

The chaotic structure of the EP’s title track, while typical of Zé catalog, disrupts his fans’ claims of “selling out.” He employs a variety of sonically disjunct approaches, opening with the startup sound for Microsoft’s Vista OS before jumping into a psychedelic samba-rock tune with a staccato guitar and a brass section. Zé recorded his vocals over multiple tracks, at times simultaneously sung/spoken at a low pitch and sung at a high pitch. The first half is familiar – the voices trade between Zé and a female companion in something sounding like a duet over a samba-rock beat. The lyrics directly reference infamous moments when Brazilian audiences have turned on their musical icons thought to be too involved in international business influences.

The price of a banana

He no longer looks to samba

At the mid-point, rock gives way to a serious march and more voices enter (including famed São Paulo hip-hop artist Emicida) making the song’s structure more like a trial, complete with competing arguments, before returning to samba-rock under Emicida’s rapping. The song is creative and fun, but it is far from Brazil’s top-40 fare which often favors smoother genre blends and urban pop hits.

Given all of the attention paid to musicians’ efforts to supplement their meager income from digital sales and streaming royalties by forging partnerships with a variety of multinational corporations, it is a little surprising that Tom Zé’s participation in a Coca-Cola commercial would be this controversial. It is difficult to find a musician in Brazil that hasn’t benefitted from some kind of corporate sponsorship. Most artists accept funding from a granting arm of a national corporation (oil company Petrobras, major bank Itaú), license music to national ad campaigns, or embark on a more direct co-branding effort from the likes of mobile phone providers and skin care companies.

One of the hallmarks of the recent changes that have affected the music industry is that musicians rarely refuse opportunities for their music to be used as the soundtrack for mainstream audio/visual entertainment and advertisements. The practice is so common that one of the best-regarded music industry survival books explains possible changes to a musician’s brand when they participate in the advertising of other products. Instead of  “don’t license your music,” musicians should license their music in a way that will benefit their brand. It is rare for a song’s success among World Cup spectators to harm musicians; anthems that reflect well on the host nation(s) and express the energy of cheering crowds are a central feature of the tournament. Shakira’s “Waka Waka” actually bolstered her credibility among music fans across the African continent because it sampled Golden Sounds’ hit “Zamina Mina,” a popular song among hip-hop artists in Camaroon and Senegal.  In Zé’s case, he misjudged how the tournament and its corporate sponsors were being read by the Brazilian public just weeks before tensions exploded in protest. Indeed, as compared to other Brazilian artists who have recorded potential 2014 World Cup anthems, the reaction to Zé is unique.

As others have noted, television advertising played an important role in the June protest soundtrack. Protesters appropriated the song from a Fiat commercial (released just weeks after Zé’s Facebook episode) that explicitly connects cheering soccer crowds in the street to a new car.

The meaning of “torcer,” a common expression for “cheer” in both advertisements’ copy, is transformed back to its original meaning to wrench or twist thereby exposing the conflicts that have been exacerbated by Brazil’s preparations for the tournament and the sports industrial complex.

These crowds twisted an ad’s soundtrack to challenge the role of multinational agencies and corporations in Brazil’s skewed socio-economic priorities. Indeed, as Leo Cardoso wrote in Sounding Out! a year ago, some of these priorities include regulating sound in Brazil’s largest cities.

For both of these cases involving sonic responses to advertisements that explicitly seek to capitalize on excitement for the soccer tournament, their original intended meaning was twisted and wrenched, forcing musicians to re-evaluate their publics. In the current political climate, Zé found that musical sounds can be aligned with the FIFA World Cup, so long as they are about celebrating sport rather than its multinational sponsors. 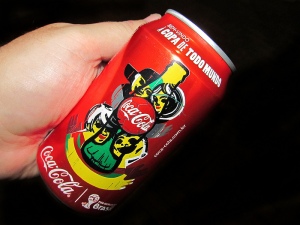 Kariann Goldschmitt is an Adjunct Assistant Professor at New College of Florida and Ringling College of Art and Design. She holds a Ph.D. in Musicology from UCLA (2009) and was the 2009-2011 Mellon Fellow of Non-Western Music at Colby College in Maine. Her scholarly work focuses on Brazilian music, modes of listening, and sonic branding in the global cultural industries. She has published in The Journal of Popular Music Studies, American Music, Yearbook for Traditional Music, and Luso-Brazilian Review and contributes to the South American cultural magazine, Sounds and Colours.

Adjunct Assistant Professor of Music at New College of Florida, music scholar for hire.
View all posts by kgoldschmitt »
« Previous post
Next post »