Tag Archive | Declaration on the Rights of Indigenous Peoples
February 19, 2015

The “Tribal Drum” of Radio: Gathering Together the Archive of American Indian Radio 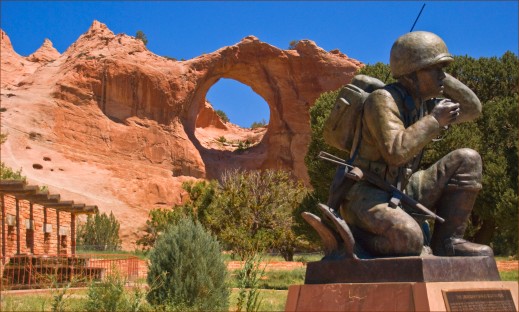 Over the next few weeks, Sounding Out! is proud to offer a new Thursday series spotlighting endangered radio archives across the United States, the kind of resources whose recognition and preservation could not only change media history, but also how we conceive of media history – and the voices that belong in it.

Our writers are part of an effort that is historic in its own right, the Radio Preservation Task Force (RPTF), part of the National Recording Reservation Plan at the Library of Congress. Over the past six months, under the guidance of Christopher Sterling (George Washington University) and Josh Shepperd (Catholic University), the RPTF has drawn together more than 120 faculty researchers and advisors from across the country who in turn have spread the word to create a network of more than 270 archives that hold recordings of broadcast radio, with the goal of creating a national inventory of finding aids and encouraging preservation and modernization through digital access.

If you’ve got archival broadcast radio that can’t be got online and maybe nobody even knows about — in any format or genre, national or local, high-powered or low, commercial or college, in a display or a shoebox – then we want you.

The coming months will see a second campaign of archive recruitment – I’ve taken on a role as Network Director to help coordinate that – as the RPTF rolls out a new working association with the American Archives of Public Broadcasting and gears up for a conference at the Library of Congress in early 2016, for which radio historian Michele Hilmes will be the Program Director.

Drawing on this vast effort, SO! will be bringing you stories of gaps in the record, voices we’ve long missed and need to recover, and some we are in danger of losing for good. We begin with a post by Josh Garrett-Davis, a PhD Candidate at Princeton University pursuing unique research into the long-unrecognized and uncatalogued history of Native American broadcasting.

Pursuing that history requires hard work and persistence; it also requires reimagining what counts as an archive in the first place.

Despite dire poverty across most of the archipelago of semi-sovereign Native American land often called “Indian Country,” radio receivers had become a normal part of life there by the Great Depression. For example, as contemporary publications and later memoirs and oral histories reveal, after work hours in the camps of the Indian Emergency Conservation Work program (the Indian CCC) from northern Minnesota to the Southwest and the West Coast, many men and women listened to the wider world—even following Admiral Richard Byrd’s broadcasts from as far away as Little America, Antarctica.

Listeners, yes. But when did Native people take up the means of production, so to speak, and generate broadcasts themselves? In his history of Native radio, Signals in the Air, Michael C. Keith quotes several sources suggesting little sustaining programming existed until the first Native-owned and -oriented station appeared in New Mexico in 1972. As a sort of internal colony of the United States, Indian Country heard only imperial broadcasts for half a century. The “right to establish their own media in their own languages” in addition to “access to all forms of non-indigenous media without discrimination”—as described in the U.N.’s 2007 Declaration on the Rights of Indigenous Peoples—arrived remarkably late, and are still not fully granted to Native people. Quite recent are the 53 stations catering to Indian communities, and vital national programs like Native America Calling.

But Native people did speak and sing over the airwaves in earlier decades. In some cases a direct or indirect archive even exists, and undoubtedly more will emerge as radio archives more generally are preserved and cataloged through efforts such as the Radio Preservation Task Force of the National Recording Preservation Plan. The trouble is that the cumulative archive of early Indian radio has not been identified as a valuable record or really as a coherent archive at all, perhaps due to compounded misconceptions of radio as an inconsequential documentary record, and of American Indians as technological naïfs. In this post I call attention to the scattered fragments of this archive, which should be recognized as an important heritage for the recent progress in Indigenous media, echoing the various ways Native people seized limited opportunities once broadcast technology appeared.

Here is an initial attempt to quilt a few of those pieces into a pattern:

Widespread broadcasting started at about the same moment—the 1920s—as the first agitation toward tribal political sovereignty in the (constrained) twentieth-century sense. In March 1925, the Cayuga statesman Levi General, who held the ceremonial title Deskaheh, delivered an address from a Rochester, New York, studio. As transcribed in the Haudenosaunee (Iroquois Confederacy)–produced book A Basic Call to Consciousness, he began, “Nearly everyone who is listening to me is a pale face, I suppose,” and went on to appeal to those palefaces for Iroquois sovereignty on land that, like his radio signal, straddled the Canada–U.S. border (18). He urged his listeners to write to representatives in both governments and “ask them to tell you when and how they got the right to govern people who have no part in your government and do not live in your country but live in their own” (22). General certainly grasped the democratic and transnational possibilities of the new medium as he spoke directly to the citizens of two newcomer nations and plainly described to them a Haudenosaunee sovereignty that must have seemed radical.

Around the same time, the Yakama/Cherokee singer Kiutus Tecumseh (aka Herman Roberts) used his celebrity to perform on radio stations across the country, adding political commentary on Indian policy between songs. Often the songs he performed were Indianist compositions by non-Indian composers; Tecumseh was, in historian John Troutman’s words, “‘playing Indian’ with a pointed, political message” (250). Ojibwe bass singer Chief Roaring Thunder (aka George LaMotte), meanwhile, performed on KVOO from Tulsa in the 1920s, as mentioned in the contemporary press.

So far no audio transcriptions of any of these pioneering broadcasts have turned up, though in the 1970s the publication Akwesasne Notes produced a reenactment of General’s address and sold it on reel-to-reel, cassette, and cartridge.

One Native radio voice of whom an audio archive remains is the humorist Will Rogers (Cherokee). Historians Lary May and Amy M. Ware have convincingly argued that Rogers espoused Cherokee values—which informed his communitarian politics—and sometimes advocated directly on Native issues. Part of the task of creating and preserving an Indigenous media archive is to recognize Rogers’s place in a genealogy: He united oratory like Levi General’s with the vaudeville sensibility of Kiutus Tecumseh and Chief Roaring Thunder. (Rogers could also stand in for a number of mainstream performers whose Indian heritage was not widely recognized, from Lee Wiley to Hank Williams to Jimi Hendrix.)

World War II brought about vast changes in Indian Country, including increased exposure on the air. Great numbers of Native people served in the war effort—notably, in terms of radio, the Navajo and Comanche “code talkers.” But back home, the first sustained radio program, aptly named the Indians for Indians hour, began in 1941 on WNAD in Norman, Oklahoma. Don Whistler (aka Kesh-Ke-Kosh), the first Sac and Fox chief elected under the reforms of the “Indian New Deal,” created the show as a model of participatory programming and (fortunately for later generations) recorded more than a hundred programs on acetate discs before he died in 1951. Indians for Indians, which served and drew performers from perhaps twenty tribal communities and several Indian boarding schools in Oklahoma, persisted in various forms until the 1980s. The only show available online is one from 1976.

I have listened to most of the extant shows from the first decade—which are not endangered except insofar as they have been ignored—and it is a remarkable institution that adopted Will Rogers’s humor and brio while also foreshadowing the vibrant Native radio networks of today.

Archives are more scarce from elsewhere in Indian Country, but traces endure in archives and history books: The renowned Chiricahua Apache artist Allan Houser performed on the air in New Mexico as “the Apache Kid.” In the 1930s and ’40s, students from Santa Fe Indian School and Flandreau Indian School performed on radio shows in Santa Fe and Omaha, respectively. I have not found any recordings of any of these instances, but a few audio archives suggest transcriptions yet to surface: A Tuscarora farm family can be heard singing “By the Waters of the Minnetonka” on Major Bowes and His Amateur Hour on NBC in 1935. NBC also covered an American Indian Exposition and the Flagstaff All-Indian Powwow in the ’30s, which gave Native singers and speakers a national hearing. A non-Indian couple recorded Hopi and Zuni singers on an unidentified station in 1955 and 1956 from Parks, Arizona, a tape which was dubbed by an anthropologist and deposited in the Archives of Traditional Music at Indiana University.

There must be many other fragments, and we can hope that broad efforts like the Radio Preservation Task Force—as well as archival efforts originating among Indigenous organizations like Native Public Media, Koahnic Broadcast Corporation, Native Media Resource Center, and Vision Maker Media—could turn up records of them.

Marshall McLuhan once wrote ominously of the “tribal drum of radio” leading the masses to totalitarianism. But that message, like the medium itself, could be interpreted in a much more constructive sense. When we gather together the early history of Native radio and assemble the intertribal quilt proposed above, the product seems to squarely refute the racial logic McLuhan implied. We may find instead that Indian people themselves recognized right away the importance this “drum” could and would have for maintaining vibrant language, musical, and oral traditions in the face of colonialism.

The Red Power movement is generally thought to begin with the occupation of Alcatraz Island in 1969–71. Part of that action was the Santee Dakota poet and activist John Trudell’s creation, “Radio Free Alcatraz” on KPFA in Berkeley, California. We might hear these programs (preserved in the Pacifica Network’s archives) as heralding a new era of reservation stations and media advocacy by Native people. We could also hear them as descending from efforts—still unrecognized and uncatalogued—by Native innovators over the previous half century.

Josh Garrett-Davis is a PhD candidate in history at Princeton University. His dissertation, “Resounding Voices: American Indians and Audio Technology, 1890–1969,” examines Native American use of phonograph and radio technology from the earliest ethnographic and commercial phonograph records to the founding of Indian-run labels and radio shows in the mid-twentieth century. He is the author of Ghost Dances: Proving Up on the Great Plains (Little, Brown, 2012), and a member of the collective M12, which promotes and creates art in rural places.

Special thanks to Daniel Murphy for the RPTF Logo.