“Take ‘Em to Chuch”: OutKast and the Sounds of the Southern Black Church

In 2006, I ventured into Hoosier Country. I found myself in the middle of…nowhere. And I was depressed. No, not because I decided to move to Indiana all by my lonesome on a huge leap of faith to pursue a graduate degree – I was too smooth for that – but because I found myself in a town where I couldn’t watch Outkast’s debut film Idlewild. Where they do that at? I am a Southern-bred, Southern-fed kinda girl. And Outkast was my muse. Hell, as a certified Down South Georgia Girl, all things Georgian were my muse. I planted my feet in red clay. My soundtrack was Organized Noise, the production team and heavy hitters that worked with OutKast, Goodie Mob, and a slew of other folks out of a rinky dink house basement that would later become known as the Dungeon (Family). I took pride in being from the Dungeon. And here I was, hundreds of miles away, frantically trying to find a theatre that would, if only for a brief 90 minutes, thrust me back into that familiarity of Southern life.

Of course, OutKast (comprised of members Andre Benjamin and Antwan “Big Boi” Patton) is hardly considered strictly Southern today. However, their 1994 release Southernplayalisticadillacmuzik shattered perceptions that Southern Rap was an oxymoron. In fact, OutKast’s initial sound updated tropes of southern black resistance and retaliation, fusing a lethal mastery of lyricism and flecks of a contemporary Southern culture too easily dismissed by non-Southerners. Calling upon and subverting the stereotypical traits of the Southern black voice – drawn out, slow, and heavy – OutKast sets up shop in hip hop by showcasing a rich history of Southern flair and homegrown sounds. The album made this intervention at the precise moment when hip hop became much more accessible to a mainstream white American market and the idea of being “post-Civil Rights” gained cultural traction. Combining narratives of being young, black, and frustrated with a sonic backdrop that includes an instrumental arsenal of horns, harmonicas, organs, drums, and bass, OutKast challenged and reconfigured how Southernness, Americanness, and contemporary black experience sounded at the turn of the millenium. Their initial releases seem to pick up the question of what it means to be displaced, Southern, and black after the South settled from its liberatory movements, pulling from the voices, images, and music of Southern protest like the Freedom Singers or Sweet Honey in the Rock and fusing these sounds with hip hop. 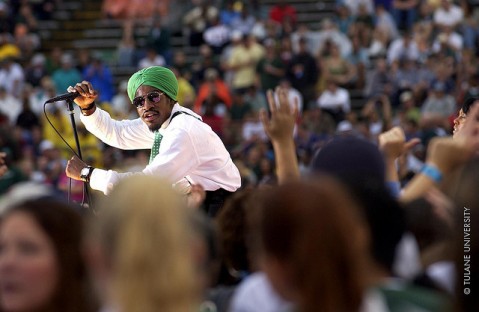 In order to discuss how they challenge and reconfigure notions of Southerness, Americanness, and contemporary black experiences, we should look at their musical nods to the black church. OutKast draws heavily on the Southern black church through sermon-esque flow, call and response, and snatches of “chuch” (lose the ‘r’) music. The black church is a staple in OutKast’s sound, reflecting what Guthrie Ramsey refers to in Race Music as community theatre, a site where “cultural, communal, and family memories associated with forms like music often become standards against which many explore and create alternative and highly personal identities for themselves” (33). The Southern black church provides such a site for communal and collective memory not only in Outkast’s music, but in African American history. Celebrated and upheld as a site of refuge from an abrasive and openly racist white supremacist environment, the black church provided a safe haven for freedom of cultural expression and social commentary unavailable in Southern white public space and discourse. OutKast challenges this older, static definition by updating its purpose to reflect the shifting social climate of the late-20th century American South. While they continue the resistance narrative tradition by bringing their marginalized experience to the forefront, they also sonically reorient mainstream views of contemporary Southern black life.

Instantly recognizable across OutKast’s recordings, their funky blend of sacred and secular musics–the blues, gospel, and hip hop–give sonic texture to something quiet-as-its-kept in black churches, how the so-called “bad” folks still come to church on Sunday, even if they were unholy on Saturday night. OutKast plays upon this unspoken understanding in songs like “Jazzybelle” from 1997’s ATLiens, “B.O.B. (Bombs Over Baghdad)” from their 2000 release Stankonia, and the straightforward “Church” from SpeakerboXXX/The Love Below (2003).

A particularly striking instance is heard on “B.O.B.,” a song which brazenly discusses issues that are often reserved for closet prayer and silent suffering. As Andre weaves a lyrical assault on the poor conditions of living in the black working class:

too high to jump in jail

Too low to dig, I might just touch hell – HOT!

Get a life, now they gon’ sell

Then I might cast you a spell, look at what came in the mail

A scale and some Arm and Hammer, slow grow grid and a baby mama

Black Cadillac and a pack of pampers

Stack of question with no answers

Cure for cancer, cure for AIDS

Make a nigga wanna stay on tour for days

Get back home, things are wrong

Well not really, it was bad all along

Andre rhymes across an instrumental blend of bass and the church organ, inundating his listener’s ear with agency and anger. The church organ is as angry and explosive as his flow, with riffs and keys banged out loudly, quite different from the soft accompaniment often heard in a church setting. By heavily utilizing the organ and church choir at the end of the track, chanting “Bible music electric revival” OutKast subverts and updates the celebrated Black Church Revival, a gathering of church folk and the lost, swinging church music to give a voice to the marginalized black working class. The hybrid, urban sound of “B.O.B.” provides a space for the reclamation of a disenfranchised southern African American narrative that blends the suffering trope mandating much of African American religion with current trends in cultural expression reflected in Hip Hop. In Idlewild (which I FINALLY saw a year later, by the way), Andre and Big Boi visually annotate their secularized black church by creating an imagined community in rural Georgia that revolved around the jukejoint Church. OutKast’s audio-visual syncretism paved the way for later acts like Pastor Troy, who secularizes tropes of black masculinity and leadership in the black church, likening them to the struggles of being at war with those who don’t understand the struggles of a young black south.

The black church provides OutKast with a blueprint for reconciling displacement and authenticity by creating a sound that maneuvered a Post-Civil Rights landscape of shifting markers of social-economic identities and race. By connecting the historical context of the Southern black church with Hip Hop, OutKast’s sound reflects not only the historical residue of a pre-Civil Rights Movement South but also the constant search for a space of expression in an era where a stagnant or nonexistent “modern South” is a popularly comfortable disbelief. Perhaps this is why I was so desperate to find a theatre showing Idlewild; I found myself a geographically displaced Southern black youth searching to situate and sustain a new layer of my own post-Civil Rights narrative.