“I Love to Praise His Name”: Shouting as Feminine Disruption, Public Ecstasy, and Audio-Visual Pleasure 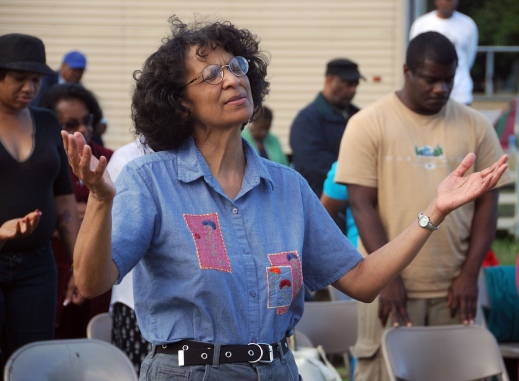 Well, if you don’t believe in shouting,

That’s alright with me

Some folk don’t believe in shouting,

That’s alright with me…

Doubt and ignore it,

But I belong to the Lord’s crew.

David said rejoice in the Lord,

And that’s the way we Christians do.

If you don’t believe in shouting,

That’s alright with me.

–Dorothy Love Coates & the Gospel Harmonettes, “That’s Alright with Me”

A handy catch-all term, “shouting” is actually a euphemism encompassing a range of ecstatic worship behaviors.  These can include clapping, dancing, pacing, running, rocking, fainting, as well as using the voice in speaking, singing, laughing, weeping, yelling, and moaning.  Certainly, there were men who shouted in the days of my childhood in church; there are men who shout today.  The only shouts I can recall and even imitate to this day, however, are those of the women.

There is, in fact, a longstanding association between women and shouting.  Perhaps because of the pronounced emotionality involved in the practice, the shouting sphere tends to be prefigured as feminine and in this bears great relevance to women.  I am interested in the significances of shouting among black Christian women of struggling populations.  In my view, shouting is not only a religious practice for these women, but is also a binary-breaking performance which confounds—if only fleetingly—the divisions which have so often oppressed, menaced, and harmed them.  I argue that shouting has worked to codify the disruption of male-dominated services by women who have so often faced sharp sanctions by black church patriarchy.  I also contend that shouting places its female practitioners and their observers within a sphere of public ecstasy and visual and auditory pleasure, which makes mischief for notions of what is proper for Christian women and for the entire church community.

The Shout, the Sound, and the Shriek: Black Feminine Disruption

In a 2011 post for Sounding Out! entitled “Pentecostal Song, Sound, and Authentic Voices,” Ashon Crawley posits the existence of a black church “public zone,” which serves as the conceptual, holy ground upon which “sound, song, and subject [function] as conduits for the exchange of ecstasy and ecstatics.”  I’d like to track Crawley’s public zone into the shouting sphere, the very heart of ecstasy within the black worship experience.

Although culturally codified—even expected and welcomed—within the church community, the shout functions primarily as a disruption.  The faces, bodies, and voices of shouting black women disrupt the flow of the service.  A shout takes time and has the power to alter the program.  Regarding such moments, worshippers—most often women and gay men—often proclaim in retrospect, “Baby, there was no more order!” This disruption of order through the use of the body and the voice has a distinct place within the Christian black feminine tradition of resistance to oppression. 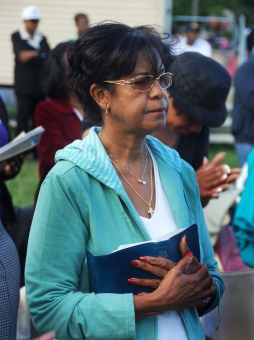 In the essay, “The Restorative Power of Sound,” womanist Roxanne Reed has examined the function of gendered sound within black Christianity.  For Reed, the feminine “wordless cry, holler, moan, or wail” achieves “primacy over the written text,” “suggests a historical time with relying on a defined chronology,” and is legitimated by an African “ancestral heritage” which presages black musical forms (2).  This distinctly feminine worship sound claims space from “patriarchal privilege,” which has often extended to black folk preaching, a tradition which excluded most black women for decades after slavery.

The sound of the black feminine in worship is thus a symbol for black women’s triumph over historically masculine arenas of writing, history, and form. The shout and the gendered worship sound can be placed in critical triangulation with Fred Moten’s “shriek,” as theorized in In the Break (2003)  An expression of the distinct suffering of the black female, the shriek is a primal “phono-photo-porno-graphic disruption” of spirit and matter, and other binaries (14).  The shout, the feminine worship sound, and the shriek all take center stage as black female performances which disrupt oppressive categories and assert the black woman’s voice as triumphant.

Many observers have noted the shout’s resemblance to sexual ecstasy.  The shout is often expressed through the sounds, movements, and facial expressions commonly associated with sex.  Some shouters close their eyes and moan.  Some hug themselves around the waist or bend over the pew in front of them, rubbing their own shoulders, bellies, or thighs.  Some roll about the floor, hollering or speaking in tongues.  Some whisper His Name, as in closest intimacy to a lover.  Some dance with abandon before the altar or in the aisles before collapsing, spent and panting.  Some quiver quietly in deepest distraction.

Shouters in the throes of their ecstasy are closely observed by all within the church community.  Members of church communities often mark shared remembrances by who shouted, when, and how.  Even young children can be called upon to reproduce the shouts of various church members. The conspicuousness of the shout provides reason to consider it as spectacle containing pleasure for both the shouter and those who gaze upon her.

Laura Mulvey’s “Visual Pleasure and Narrative Cinema”  discusses “scopophilia” as a phenomenon occurring in “circumstances in which looking itself is a source of pleasure, just as, in the reverse formation, there is pleasure in being looked at” (587).  In the moment in which a shout goes forth, those shouters who are aware of being watched—not all are—and their gazers may be said to enter into mutual pleasure from being watched and from watching.  For the observer, the pleasure arising from the sight-based stimulation is often compounded by the narcissism of the ego which seeks to identify with its source.  This may explain why in highly charged church moments, shouts become highly communicable—“thriving in concert,” as Zora Neale Hurston once phrased it.  Looking upon another in worship ecstasy can be understood to reinforce one’s own relation to the Holy and to stir desire to engage that relation through shouting.

There is sufficient cause to assign  what I call a  “sonophilic”aspect to shouting as well, as shouting never fails to take place but within a context of sound.  This sonophilic component should be understood as the means by which the sounds of ecstasy coming from a shouter provide stimulation and identification in the listener, who may in turn become a shouter.  It must be noted, however, that the sonophilia can emanate from sources other than the shouter.  Shouts are often roused by a complex network of sounds.  Within a service, preaching and verbal exhortations, prayers, congregational chants and songs, and instrumental music designed to buoy sermonic delivery or to capitalize on swells of emotion often work in tandem to provide the sound-based pleasure essential to shouting. 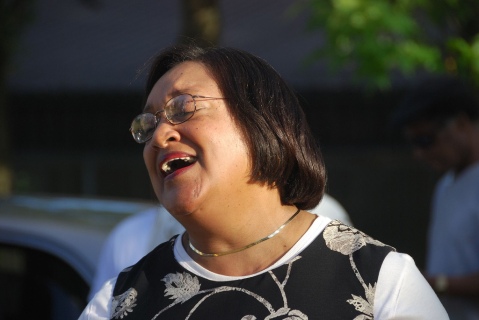 A Final Shout-Out to Shouting

From West Africa to North America, from slavery to emancipation, from the eighteenth century into the present day, the black ecstatic in the form of shouting has served several important purposes for black women.  Black women’s general and persistent preoccupation with the relationship between the spiritual and the sensual, the cornerstone of black female intellectualism in my view, was first and foremost expressed in the practice of shouting.  The shout can be understood as the primary site upon which black women made the spiritual physical and rendered the sensual holy.

Furthermore, in eras in which black women were customarily denied the right to preach and were granted but limited authority within church communities, the shout communicated a woman’s ability to engage the Holy.  This proven ability undoubtedly helped to open doors for the thousands of black women who now preach and pastor all over the country. Shouting has also provided much needed relief for the unique pressures of the black female in North America, absorbing and transforming her hurts and frustrations and replacing them, down through the centuries, with the hope and strength vital to her survival.

Shakira Holt is a thirteen-year classroom veteran and currently teaches high school English in Los Angeles County. She earned a doctorate degree in English from the University of Southern California, and works primarily in the area of black women’s literature and culture. She is deeply concerned about the intersections of race, religion, gender, sexuality, class, and politics in the public sphere. She is a lazy poet, a latent novelist, an intermittent blogger, a retired songwriter, and a reluctant karaoke singer. A licensed Baptist minister, she is but slowly working her way back to the pulpit. “I Love to Praise His Name” is her first published piece.