Blinded By the Sound: Marvel’s Dazzler – Light & Sound in Comics

I recently got my hands on a complete set of Marvel Comics’ Dazzler, a comic from the early to mid-80s that featured Alison Blaire, a mutant with the power to transform sound into light. She was the result of an attempted collaboration between Marvel and Casablanca Records. The idea was that rather than publish a comic based on a pre-existing musical act (as they had in 1977 with KISS), Marvel would create a character and Casablanca would, in the words of one of the co-creators, “create someone to take on the persona,” with the potential for a movie tie-in. Casablanca dropped the project before the first issue of the comic, but Marvel re-tooled the character and went ahead with the Dazzler—a talented, yet struggling singer stuck playing at cheesy discos and small clubs while dreaming of wider success.

The last time I wrote about sound in comics, I mentioned how despite (or because of) sound’s transparency, it is an unobstrusive tool in providing the cues needed by readers to provide the closure through which comic literacy functions. The Dazzler series is not a great comic, it is often schmaltzy, repetitive and rife with errors, and just when it started to fulfill a bit of its promise, its creative team and the comic’s direction were changed and it was canceled soon after, but despite this, it is the perfect subject for looking at the representation of sound in comics. Dazzler’s power literally shines a light on how pervasive imagined sound is in this visual/textual form. It also makes room for even more sounds to be woven into the title’s narrative. Since Alison Blaire is an aspiring singer the most prevalent sound present in this title—less common in other popular super heroes titles—is music. Dan Fingeroth and Jacob Springer (who wrote the majority of Dazzler’s brief run) had many opportunities to depict a visual representation of singing. 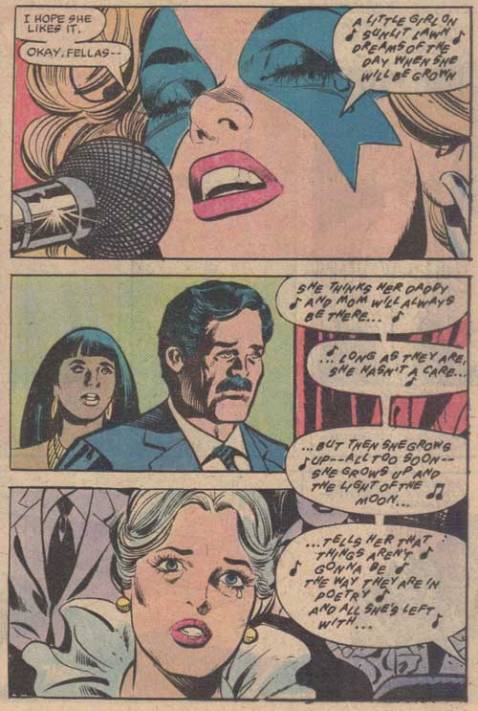 The fans react to Dazzler’s singing – from Dazzler #7 (August 1981), by DeFalco, Fingeroth & Springer

As a singer, Dazzler is a maker of sounds in addition to a user of the sound already present throughout the medium. As a result, in addition to the visual representation of sound through Dazzler’s glowing light show, the writers were in a position of having to use text to describe the quality of sound more often than usual for their genre. As Tom DeFalco (a co-creator and sometimes writer on the series) said in a 1980 interview with Comics Feature, “I have to put in a lot of sounds in the captions and that I hope that kids who very rarely read captions will read these so they’ll know where the sound is coming from. But the good thing about sound is that you are always surrounded by sound.” DeFalco’s answer illustrates the contradiction at the heart of comic sound—it may be ever-present, but because of this is taken for granted to such a degree that he worries that its source will not be self-evident on the comics page. He adds that one way around this, because of Dazzler‘s focus on music, is through descriptions of the audience’s reactions to it—how it makes them feel is a way to clue the readers into the source and quality of sound present in the panels.

It is the affective relationship to sound that marks Dazzler as very different from other superhero comics. All the super-villain battles and fear of the revelation of her mutant powers are merely the narrative obstacles to her primary goal and obsession—singing. In order for that work, the emotions that emerge from her performance (both for Alison and those listening) needs to be evoked (something that the comics unevenly succeeds at). The colorful lights that are often part of a stage show are, in her case, a direct result of her relationship to not only hearing/absorbing sound, but making sound. She repeatedly explains that rhythmic nature of popular music makes her powers easier to use, because she can feel its pulse. For Alison Blaire, hearing, making and using sounds are conflated by means of the visual and textual, allowing the reader to see what he cannot hear or feel. In other words, Dazzler’s conceit is most successful when it evokes an empathic connection between the reader and the imagined sounds.

The feeling around sound can also be evoked through its absence. A common practice in mainstream superhero comics is the guest appearance by a popular hero in a new or poorly-selling comic in order to boost sales, and Dazzler seemed to have cameo by some better known character almost every issue. This practice allowed for writers and artists to depict what had for decades been undepictable. When Dazzler teams up with Black Bolt, King of the Inhumans (a Fantastic Four character from back in the Kirby days) he is finally allowed an opportunity to use his greatest and most feared power, his voice. Black Bolt is forever silent. His voice is so powerful a weapon that even his whisper can inadvertently kill all those around him. Thus, despite being an iconic Silver Age character, the voice of Black Bolt is one that can never be “heard” by comic readers. His silence is part of his identity and grants him a tragic and noble-bearing. As such, when he is teamed up with Dazzler, her power becomes the perfect vehicle for representing the unrepresentable sound—Dazzler absorbs the sound of his voice to emit the energy needed to defeat the super-villain. In having the characters work together, the writer was able to use one character’s power to finally represent the other’s. In this moment there is a sense of relief and emotional release, along with a sense of peril that bound to Black Bolt’s voice gives the unheard sound resonance.

Allison turns up the muzak to power her ability. From Dazzler #8 (Oct 1981) by DeFalco, Fingeroth, Springer & Coletta

As the title continued (and after its cancellation, when Dazzler became a member of the X-Men), Alison Blaire’s powers developed in different ways, the most fascinating was the development of her hearing. While early in the character’s career she was dependent on passive hearing, often carrying a portable radio with her in order to insure she had sufficient sound with which to use her light powers, later she developed acute active listening skills. As this aspect of her power developed, it became clear that it was not necessarily the force of sounds themselves that determined the extent of her power (though clearly loud sounds could be more easily transformed into more powerful forms of light, like ultra-focused lasers), but her attentive listening. The more attention she could pay to sounds and could discern even faint sounds, the more she could absorb and transform—later she is even able to use the sounds of digging insects and worms to save herself when she is accidentally buried alive.

By the end of her original series, Dazzler‘s new writing team had her mostly abandon her musical ambitions and take the more common (and dare I say, more boring) comic book route of getting a costume and joining a team of liked-minded super-beings. Because of this, the character’s special relationship to sound is lost in the shuffle of convoluted continuities and cosmic crises present in the various X-titles. There is less time and attention paid to song and sound as power and its emotional weight. The abandonment of her career goals also abandons the opportunity to explore a unique representation of sound and identity in a medium where identity is writ large. However, if there is a take-away from the strange, mostly failed, collaborative experiment between comics company and records company, it is that like Alison Blaire, if the comics reader “listens” carefully to the sounds present in the text and pictures there is a potential for a lot more depth and appreciation of how sound’s depiction is crucial to comics’ formal success.

Osvaldo Oyola is a regular contributor to Sounding Out! and ABD in English at Binghamton University.

7 responses to “Blinded By the Sound: Marvel’s Dazzler – Light & Sound in Comics”