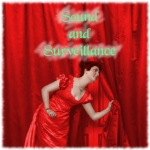 It’s an all too familiar movie trope. A bug hidden in a flower jar. A figure in shadows crouched listening at a door. The tape recording that no one knew existed, revealed at the most decisive of moments. Even the abrupt disconnection of a phone call manages to arouse the suspicion that we are never as alone as we may think. And although surveillance derives its meaning the latin “vigilare” (to watch) and French “sur-“ (over), its deep connotations of listening have all but obliterated that distinction.

In the final entry to our series on Sound and Surveillance, sound artist Anne Zeitz dissects the theory behind her installation Retention. What are the sounds of capture, and how do the sounds produced in and around spaces of capture affect our bodies? Listen in to find out. -AT

This podcast presents Retention, a quadriphonic sound installation made with David Boureau. It considers the sounds of surveillance, detention and migration. Retention concentrates on the “soundscape” of the Mesnil Amelot 2+3 detention center for illegal immigrants situated to the North of Paris just beside the Charles de Gaulle airport. This center constitutes the largest complex for detaining “illegal immigrants” in France, with 240 places for individuals and families. Approximately 350 airplanes pass closely above the center over a 24 hours time span, creating intervals of very high sound levels that regularly drown out all other ambient sounds. Retention uses quadrophonic recording technology to capture and diffuse a live transmission of communication between pilots and the Charles de Gaulle control tower. The work also integrates recordings from inside the center made by communications via mobile phones. In the short intervals of silence (always implying sounds of some sort), the atmosphere seems suspended. This suspension is paradigmatic for the clash between the local and the global, between those who are trapped in a state of detention before being expulsed by the engines moving over their heads and those who circulate freely (nonetheless under surveillance) in our global society. Retention exhibits a changing sonic space in order to consider how “waiting zones” and processes of mobility meet.

Anne Zeitz is a researcher and artist working with photography, video, and sound media. Born in Berlin in 1980, she lives and works in Paris. Her research focuses on mechanisms of surveillance and mass media, theories of observation and attention, and practices of counter-observation in contemporary art. Her doctoral thesis (University Paris 8/ Esthétique, Sciences et Technologies des Arts, dissertation defence November 2014) is entitled (Counter-)observations, Relations of Observation and Surveillance in Contemporary Art, Literature and Cinema. Anne Zeitz was responsible for organizing the project Movement-Observation-Control (2007/2008) for the Goethe-Institut Paris and collaborated on the exhibition and conference Armed Response (2008) at the Goethe-Institut Johannesburg. She is a former member of the Observatoire des nouveaux médias (Paris 8/Ensad) and of the research project Média Médiums (Université Paris 8, ENSAPC, EnsadLAB, Archives Nationales, 2013/2014). Her most recent research concentrates on the work of the American artist Max Neuhaus with the publication of De Max-Feed a Radio Net (2014), part of the Média Médiums book series. She is the artist of this year’s Urban Photo Fest and participated at the Urban Encounters / Tate Britain in October 2014.