Tuning Into the “Happy Am I” Preacher: Researching the Radio Career of Elder Lightfoot Solomon Michaux

Welcome to the second installment of our Thursday series spotlighting endangered radio archives across the United States, promoting the work of the Radio Preservation Task Force (RPTF), which is part of the National Recording Reservation Plan of the Library of Congress. Our series kicked off two weeks ago with this post by Josh Garrett-Davis exploring both the history of Native American radio and new ways of thinking about it, and the series will conclude with a piece next week by the University of Michigan’s Derek Vaillant about radio recordings in immediate need of preservation in Detroit.

Between possible archives and endangered ones, we have an article about an archive that has begun to speak after long years of silence. Below, Professor Suzanne Smith of George Mason University gives us a preview of her research into a radio evangelist who was among the most prominent African Americans of his day, yet has been largely forgotten. Smith’s fascinating work not only revisits Elder Michaux as a historical figure, but also gives us a clear sense of how a project in radio reservation relies not only on institutional resources, but also on personal outreach. As many of us who are part of the preservation project are learning, media history lives on in storage units, basements and lockers, preserved by collectors, churches and communities that only individual connections can truly reach.

In October 1934, the Washington Post published a feature about Elder Lightfoot Solomon Michaux in which it boldly declared that the “radio evangelist extraordinary, is the best known colored man in the United States today.” At the time, Elder Michaux, known as the “Happy Am I” Preacher, had a national radio show on the CBS network that broadcast his ministry of happiness and holiness to over twenty-five million listeners each week.

Like many popular evangelists of his era, Elder Michaux promoted his image as one of God’s prophets, presciently envisioning that radio could revolutionize the purview of modern evangelicalism. Michaux first used portable radio equipment to broadcast his holiness revivals in the mid to late 1920s in his hometown of Newport News and these religious programs were among the first of their kind in the United States. By 1929, Michaux moved to Washington, D.C. in the hopes of expanding his mission.

As an African American, Michaux initially had difficulty convincing local D.C. radio outlets to put him on the air. Eventually, he persuaded James S. Vance, local owner of WJSV, to broadcast his weekly revivals. When the CBS network bought WJSV in 1932, the budding evangelist achieved a national audience in the millions.

The key to Michaux’s success was his ability to combine his preaching with snappy, upbeat gospel songs that reminded listeners that a holy life leads to a happy life, a message that resonated with Americans navigating the economic trials of the Great Depression. By the late 1930s, the BBC invited Michaux to broadcast his program on its network and listeners around the globe soon began to tune into his WJSV broadcasts in via shortwave hookup. These opportunities allowed the charismatic preacher to reach a vast international radio audience that extended from Europe to Africa, South America, and the Caribbean. That Michaux’s broadcasts, like his story, have disappeared from radio history has impoverished our sense of the role of race in the soundscape of the era.

My current book project examines Michaux’s extraordinary life and career as a radio evangelist. For this post, I want to explain both Michaux’s significance to the history of religious radio as well as African American history; and how my research has led me to join the Radio Preservation Task Force in an effort to preserve the surviving recordings this important figure, but understudied, figure.

In spite of his many accomplishments, Elder Michaux has been largely overlooked in the histories of religious radio and African American religion. Scholarship on religious radio from the 1920s and 1930s tends to focus on figures such as Father Charles Coughlin and Aimee Semple McPherson with only passing mention of African American preachers such as Michaux. In the history of African American religion in the 1930s, Michaux tends to be overshadowed by scholarship on other major figures such as Father Divine and his Peace Mission Movement and Sweet Daddy Grace and his United House of Prayer. Although Michaux’s ministry was often categorized as a religious cult in the popular press of the time, his Gospel Spreading Radio Church of God was firmly a part of the black Holiness movement and continues to have ten active congregations today. 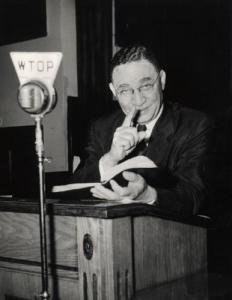 Throughout his career, which began in the late 1920s and extended until his death in 1968, Elder Michaux defied the odds and challenged boundaries of race, theology and politics to become one of the most successful religious leaders and media celebrities of his time. As early as 1926, Michaux, whose Holiness ministry openly welcomed all races, was arrested for baptizing whites and blacks together. Once established in Washington, D.C., Michaux led annual mass baptisms in the Potomac River and later at Griffith Stadium that drew tens of thousands of followers. At the height of his fame, from the 1930s through the 1950s, Michaux was regularly invited to the White House to consult with Presidents Roosevelt, Truman, and Eisenhower about the racial issues of the day. By the early 1960s, Michaux engaged in public debates with both Martin Luther King Jr. and Elijah Muhammad, leader of the Nation of Islam, about the direction of the civil rights struggle.

My book argues that Elder Lightfoot Solomon Michaux is critical to our understanding of how religious leaders used the mass medium of radio to literally “sell” evangelical faith movements in modern America. Elder Michaux was the first to fully develop the concept of a “Radio Church,” which offered official membership to followers and created one of the first, if not the first, virtual religious communities in modern America. A true evangelist, Michaux sought to reach believers and potential converts wherever they were and knew that the radio could facilitate his mission in revolutionary ways. In an interview in 1938, Michaux explained, “I wanted to give people religion over the air so they might have it at home. Then they couldn’t have an excuse for not going to church. They couldn’t say that they were tired or didn’t have the right clothes. They could get God and his teachings right in their own parlor.” Most significantly, Michaux’s entrepreneurial skill at marketing his Gospel Spreading Church of God through the radio was simultaneously in service to his race and racially transgressive in ways that complicate our understanding of how modern religious movements navigated Jim Crow segregation.

So how can we actually give an account of Michaux’s contributions? Researching radio programming from the 1920s and 1930s presents a number of challenges for any historian because recordings of broadcasts from this period are rare. Fortunately, Elder Michaux began his career on WJSV, one of the most powerful stations in Washington in the 1930s (which became WTOP, the most popular local news radio station in Washington, D.C. today). The first director of WJSV under CBS ownership was Harry Butcher, who had the foresight in September 1939 to record an entire day of programming, which is remarkable considering this was accomplished without the use of magnetic recording tape. Although this collection does not include Elder Michaux’s program, it is a valuable audio snapshot of the radio era in which he thrived. 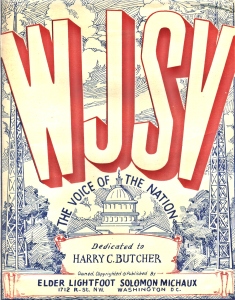 My quest to locate recordings of Elder Michaux’s broadcast has led me to destinations as far away as the BBC archives in London, which houses two recordings of Michaux’s first British broadcasts; and as close as the main branch of the current Gospel Spreading Church of God here in Washington.

In the past two years, I have also developed meaningful relationships with congregants of the church, who have begun to be willing to share their private archive of recordings. During one oral history interview, one church member, who is 92-years old, gave me a reel-to-reel tape from Elder Michaux’s funeral service, which was broadcast in October 1968. Another elder member from Newport News sent me recordings of Michaux preaching at Lorton Prison in Lorton, Virginia in the 1950s. Most significantly, I recently met the current sound engineer at the church, who has been a member since the 1940s and has a large archive of reel-to-reel tapes of Michaux’s radio broadcasts from the 1950s and 1960s. At the height of his fame in the early 1930s, Elder Michaux broadcast his religious services daily and never missed a week of broadcasting until his death in 1968. The church has only kept a fraction of these broadcasts. Nevertheless, a significant number of them exist and are housed in the church’s private storage. I am currently trying to assess the scope of the church’s collection, which has involved reaching out to church members in Philadelphia, New York City, and Newport News, Virginia. I am also trying to investigate grants that might support my efforts to digitize the tapes as soon as possible since they are at risk of deterioration in the church storage facilities.

My research on Elder Lightfoot Solomon Michaux’s career has convinced me that more work needs to be done to pursue the preservation of African American religious radio broadcasts in general. The work of the Radio Preservation Task Force can support this mission, but it will also involve grassroots outreach to established African American churches. Many of these churches regularly broadcast their services and may have their own private archives of recordings that can offer us an invaluable glimpse at the aural history of African American religious practices in the twentieth century.

Moreover, through my ongoing relationships with the congregants of Elder Michaux’s Gospel Spreading Church of God, I have developed a deeper appreciation for the importance of personal outreach to African American religious communities in the service of preserving the history of religious radio. The efforts of the Radio Preservation Task Force are critically important in terms of identifying existing institutional archives, but only through individual connections with these vital, but often overlooked minority communities, will we be able to discover and preserve these treasures of our radio past.

Suzanne E. Smith is Professor of History in the Department of History and Art History at George Mason University. She is the author of Dancing in the Street: Motown and the Cultural Politics of Detroit (Harvard University Press, 1999) and To Serve the Living: Funeral Directors and the African American Way of Death (Belknap Press, 2010). She is currently working on her third book, tentatively titled The ‘Happy Am I’ Preacher: The Extraordinary Life and Times of Elder Lightfoot Solomon Michaux.

All images courtesy of the author.

Sounding Out! Podcast Episode #5: Sound and Spirit on the Highway — David B. Greenberg

15 responses to “Tuning Into the “Happy Am I” Preacher: Researching the Radio Career of Elder Lightfoot Solomon Michaux”