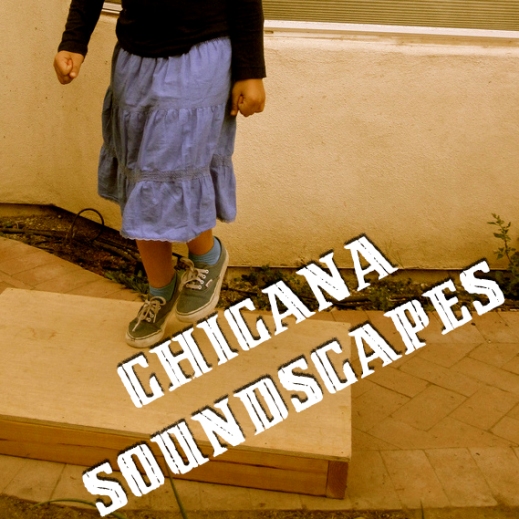 Feminista Music Scholarship understands music production and listening as a collective site of engagement that sometimes produces and sometimes challenges social structures of race, class, gender, sexuality and nation.  It is a method and practice that pushes on narrative frameworks that naturalize the absence of women of color and Chicanx subjects in music scholarship.  It is always about imagining and practicing life, as the old-saying/ dicho goes says, to the beat of a different drum, to an alternative, more just reality and experience of time, built on the knowledge of buen vivir or sumak kawsay (a kichwe concept and practice that understands the good life cannot be attained without living right with others in convivencia, in mutual respect of marginalized communities, knowledges, cyclical non-linear time, and of La Pachama/mother earth, one that aligns with knowledge practices of many indigenous communities across Las Americas).

This Chicana Soundscapes/Feminista Music Scholarship Forum is inspired by the “Sounds Like Home: Mapping Chicana Mexicana/Indigena Epistemologies in Sonic Spaces” presented at the annual American Studies Association (ASA) Annual Conference, Denver 2017. Thanks to the roundtable organizers Yessica Garcia Hernandez and Iris Viveros Avendaño for inviting me to chair the panel and to ASA Sound Caucus committee for sponsoring the panel and putting a spotlight on this much-needed research. Many have worked tirelessly for over 25 years to make space at the ASA for such a panel–one that is focused on feminista music scholarship, robustly composed of emerging feminista scholars from different localities. It is truly a collective endeavor. That is took this long says much about the way such knowledge has been valued.  That is finally happened says much about what’s coming next!

The forum’s inspiring research by scholars/practioners Wanda Alarcón, Yessica Garcia Hernandez, Marlen Rios-Hernandez, Susana Sepulveda, and Iris C. Viveros Avendaño, understands music in its local, translocal and transnational context, and insists upon open new scholarly imaginaries. Not only does each scholar’s research point to the exciting present and future of music studies, it points to the work of feminista scholars and music practicioners who’ve pushed the frames of music studies, from inside and outside of ethnomusicology and musicology, scholars such as: Deborah Wong, Deborah Vargas, Sherrie Tucker, our own mentor Angela Davis, Maureen Mahon, Daphne Brooks, Andreana Clay, Martha Gonzalez, and others.  Feminista scholars like Inés Casillas, Jennifer Stoever, Roshanak Kheshti, Monica De La Torre, and others, have made way for for feminista music studies in Sound Studies. And yet, it wasn’t so long ago that Susan McClary shocked the music studies world by insisting that gender mattered in music analysis.  We still face constant pushback on that assertion, in particular subfields, especially now. Current times require us to bridge intersectional, decolonial, and gender analysis.  Music, and our relationship to it, has much to reveal about how power operates within a context of inequality.   And it will teach us how to get through this moment.

Feminista Music Scholarship is what the participants of this forum are doing (among their many important interventions)! 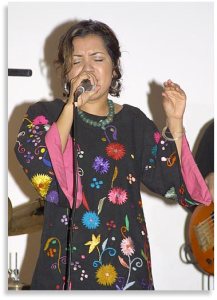 Martha Gonzalez, Scholar and Quetzal vocalist. Photo by Nic Paget-Clarke. This photo was taken during a Quetzal concert at the first community get-together of the Eastside Cafe (May 17, 2002) in the Mazatlan Ballroom in El Sereno (Los Angeles).

Indeed, Feminist Music Scholarship disrupts what Daphne Brooks describes in “The Write to Rock: Racial Mythologies, Feminist Theory, and the Pleasures of Rock Music Criticism” as “the imagined subaltern sphere of independent rock culture (dubbed “indie-rock”) [that] depends on a narrow discourse of shared knowledge that largely marginalizes (if not altogether erases) the presence of women and particularly women of color in alternative music culture” (61).  The conceptualization and development of recent pop music exhibits, scholarship by emerging scholars, and community music dialogues, decidedly influenced by Feminista Music Scholarship is one of many possible answers to Brooks’s serious question, “How do we break outside of these tightly policed spheres?”  The scholars/music practitioners in this issue respond to the burning question, “how does Chicana feminist music criticism break out of these spheres and serve as a home for new methods for writing about punk, banda, and new wave, son jarocho and participatory community music production?”

During the ASA roundtable, Alarcón, Garcia Hernandez, Rios-Hernandez, Sepulveda, and Viveros Avendaño presented six-minute flash presentations and then opened the floor to a discussion that is wide-ranging yet grounded in the material practices of sound, music, feminism, and home. They continue that important discussion there. More than ever we need panels, forums, dissertations, articles and other forms scholarship that spotlight the ways vulnerable populations have found ways to disrupt systemic oppression through their raucous listening, producing and community practices.  This permits us to remember that this fight is not over, that we are deep in it and we have much strategy to share.

Rock on forum readers, rock on!

Michelle Habell-Pallán, associate professor of performance culture of the Americas in the Department of Gender, Women & Sexuality Studies, and adjunct associate professor in the School of Music and Department of Communication, at the University of Washington (UW), is currently the Director of the Certificate for Public Scholarship. For her fifteen years plus of community engagement and the arts, she recently received the Barclay Simpson Prize for Scholarship in Public, which recognizes her efforts to foster the humanities as a public good. Her research examines music, performance, and theater as communal forms of expression that archive alternative histories used to imagine new futures. In tandem, her research also reflects on the way developing media platforms compel new methods of cultural expression, research, archiving and delivery. Her most current research considers dialogues between feminista movements and hip hop feminista musics in Ecuador and its relationship to indigenous social movements rooted in Andean concepts of Sumak Kawsai (Right-living). She is the Co-Director of the UW Honors Quito, Ecuador Study Abroad Program.

Habell-Pallán makes community &  music with the Seattle Fandango Project, and is a member of the Fembot Collective|Gender, New Media & Technology. She collaborates with a range of local community partners to direct the Women Who Rock: Making Scenes, Building Communities Collective, whose free and family-friendly Seattle unConference/Encuentro takes place annually.

If La Llorona Was a Punk Rocker: Detonguing The Off-Key Caos and Screams of Alice Bag– Marlen Ríos-Hernández