These days it’s a challenge to be reviewing a book that has anything to do with the English singer-writer Morrissey, given his support for Brexit and anti-immigrant nationalist political parties in the UK. In a fake interview, Moz recently used his website to attack non-compliant media that had criticized him. His vegetarianist pitch was that Muslim meat is murder. Oh, and the Mayor of London Sadiq Khan shouldn’t be running the city because he doesn’t speak English properly. With each new provocation in a long career of trolling, one wonders, in the words of one of his songs, ‘Little Man, What Now?’ How can it get worse? So it isn’t a good time to be a fan of Morrissey and/or the Smiths (deceased 1987), an ex-fan or someone who now claims they preferred guitarist Johnny Marr from the get-go. Who then would want to reside in a land named after Moz, even if he is only its symbolic head of state?

Thankfully Mozlandia: Morrissey Fans in the Borderlands (Headpress, 2016) nudges Bigmouth to the background, even if an almost holy portrait graces the book’s cover. For Melissa Mora Hidalgo, Mozlandia is the territory of the US-Mexico border region, and Greater Los Angeles in particular, with its cultures and communities of Morrissey Smiths fans as ‘active, creative producers’ in ‘transnational circuits of exchange’ that reveal ‘fandom’s potential for enacting resistance and creating new spaces of belonging’ (14). Hidalgo is an independent scholar from Whittier, California with research expertise in Mexican American literature, US ethnic studies and queer studies. This book is oriented by Gloria E. Anzaldúa’s canonical text in Chicana/o studies Borderlands/La Frontera: The New Mestiza (1987) and Gilles Deleuze and Félix Guattari’s contention in A Thousand Plateaus: Capitalism and Schizophrenia (1987) that the form of the book is about surveying and mapping rather than signifying. Hidalgo describes it also as a ‘storybook’ that includes field notes, journal entries, riffs on lyrics, fanecdotes (fan anecdotes) and her own personal voice as a participant in these fan cultures and a citizen of Mozlandia.

What is immediately striking is the way these different forms of writing are woven together in an accessible, honest, affecting, playful, and queer bilingual prose by someone deeply connected to the communities and activities of Smiths Morrissey fans in Los Angeles. This is an academic page-turner that wears its scholarly rigor as lightly as Morrissey wore gladioli in his back pocket. The book opens with a rush and a push to move beyond the now much reported ‘novelty’ or surprise factor of Irish-English Morrissey from Manchester in the northwest of England having so many Chicana/o fans in Southern California.

Mozlandia builds on the model of Smiths Morrissey tourism in Manchester to map out a potential tour of Los Angeles, a city where he lived from 1997-2004 and has played very often, and featured in songs and videos. After this psychogeography, Hidalgo hones in on the East LA neighborhood of Boyle Heights, where Morrissey karaoke or MorrisseyOke nights at Eastside Luv Bar y QueSo have taken place since the early 2000s. Hidalgo describes the variety of performances of local and visiting Smiths Morrissey fans including dressing up and singing songs in Spanish, Japanese and other languages. The argument embeds this bar and the fan phenomenon in the contradictory and ambivalent politics of ‘gentefication’ in which upwardly mobile Chicanas/os invest in their old neighborhoods. While describing the venue as a community space for the crossing of ethnic and gendered borders, the argument is sensitive to how the place is also ‘prone to hypermasculine heteronormative homophobic aggression from attendees’ (78).

The following chapter focuses on Smiths Morrissey tribute bands in ‘Moz Angeles’ such as Sweet and Tender Hooligans, These Handsome Devils, This Charming Band, Strangeways, Maladjusted, Nowhere Fast, El Mariachi Manchester and Sheilas Take a Bow, the latter of which includes the author on vocals. Musicians in these bands share their stories of attachment to the repertoire, genre and modes of performance and dramaturgy. This tribute band activity is much deeper and more varied than the more visible media attention for mariachi outfit Mexrissey.

From tribute bands, Hidalgo moves to the fan listenership of the tweet-in radio show Breakfast with the Smiths, The World of Morrissey on Indie 103.1 FM, a now defunct online station owned by Latino media company Entravision that played alternative/indie music with a strong British quotient. This chapter explores Twitter’s function as a remediated request line that also features as an audience forum that is rich with photos of tickets to gigs, selfies, memes and graphics alongside social media chatter and verbal performance (such as anagrams) around songs. Hidalgo then moves on to literary performances of Morrissey in poetry, fiction, theatre and film. Morrissey-inspired events are rooted here in the musical and broader artistic histories of East LA with its rock, punk and Anglophilic new wave scenes. The range of works jumps off Morrissey to articulate the experiences of growing up and rework the forms of class, ethnic and gender alienation that feature so strongly in the singer’s work. 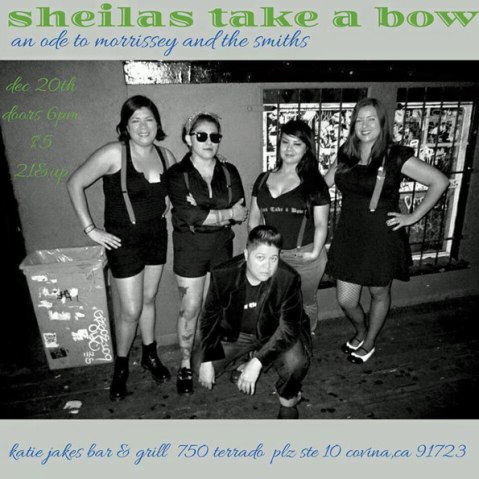 The book concludes with a trip to the UK where Morrissey’s hairdresser refuses to cut Hidalgo’s hair because they only serve male patrons. This encounter is part of a fan letter to Morrissey. Hidalgo writes, ‘I am forty-two, and you mean just as much to me now as you did when I was seventeen going on eighteen. Even when I want to scold you for saying that shit about the Chinese, or liking Nigel Farage, or calling dykes lazy, or playing shows in Israel’ (184). The awkwardness of being a fan is also described earlier in the book:

Fandom is also sometimes difficult to sustain. It gets tested. It ebbs and flows. We break up and make up with our fan object. We get mad sometimes, and we want to hold our fan object accountable when they do or say some stupid shit, something confounding, something that goes against our own principles (28).

As a Pakistani-British fan of the Smiths and Morrissey who has written a fair a bit about the critical and imaginative space opened up for postcolonial and transnational perspectives on Morrissey, I welcome Hidalgo’s desire in the latter part of the book to explore border-crossing Irish-Mexican/Latinx affinities in her future work. But I was also left yearning for more fan studies scholarship that addresses issues of disaffection, disidentification and the difficulty of negotiating one’s relationship with the object of one’s fandom. But this is a beautifully written celebration of Morrissey fandom rather than one that explores how hard it is to keep on loving that person(a).

Nabeel Zuberi is Associate Professor in Media and Communication at the University of Auckland. His publications include Sounds English: Transnational Popular Music (U of Illinois Press, 2001), Media Studies in Aotearoa/New Zealand 1 & 2 (Pearson, 2004 and 2010) and Black Popular Music in Britain since 1945 (Ashgate/Routledge, 2014).