Heard Any Good Games Recently?: Listening to the Sportscape

Sound and music play important roles in shaping our experiences of sports. Every sport has its own characteristic sounds and soundscape; some are very silent while others can be dangerously noisy. Barry Truax, in his engagement with R. Murray Schafer’s concept of soundscape in the book Acoustic Communication, states that the listener is always present in a soundscape, not solely as a listener but also as a producer of sound (10). Both Truax and Schafer use the term hi-fi to describe environments where sounds may be heard clearly, while lo-fi, often urban, environments, have more overlapping sounds. When an audio environment is well balanced (hi-fi), there is a high degree of information exchange between sound, listeners and the environment, and the listener is involved in an interactive relationship with the other two components (Truax 57). Truax’s understanding of the concepts of hi-fi and lo-fi enable a better understanding of the power relations between the key sonic elements of sports: players, the audience and the organizer (usually a game DJ), an increasingly prominent role in today’s team sports events due to permeation of recorded music.  Using examples from Finnish soccer, pesäpallo (“Finnish baseball”), and ice hockey, I track how a particular game’s sonic balance can be altered to shape the atmosphere of the event and, even influence the game’s outcome.

In Europe, soccer is overwhelmingly associated with crowd chants, as noted by Les Back in his article “Sounds in the Crowd.” Without the sounds from the audience, the soccer soundscape would be more hi-fi, revealing the keynote sounds of the sport clearly: for example, the thuds from kicking the football, individual shouts from both the players and the spectators. The clear hi-fi signal articulation may be desirable at other times, but from a home team perspective, it does not provide a good soccer atmosphere.  However, while playing recorded music to engage the crowd preceding free kicks or corner situations is not prohibited, it breaks the unwritten rules of the game. This means that creating a good atmosphere becomes the crowd’s responsibility;  thus, the infamous songs and chants.

The culture of avoiding electronically reproduced music reveals the potential vulnerability of soccer’s soundscape to silence as much as chants, if not more so. Silence often becomes a way of effecting change at the level of soundscape.  A silent, passive, crowd can mirror, for example, the team’s performance on the field or reflect a general lack of interest. Organized supporter groups can also demonstrate their dissatisfaction with something by refusing to sing.

This sound clip demonstrates how keynote sounds of soccer are exposed while approximately 1200 people in the audience seem to be “just watching” a very important home game at the end of the Veikkausliiga season 2012. In the end of the clip the home team, FF Jaro, equalizes and eventually went on to avoid relegation by just 1 point.

In contradiction to soccer, an important part of the pesäpallo experience (Finnish baseball, the national sport of Finland) is actually listening to the continuous communication of the teams. The key to pesäpallo, and the most important difference between pesäpallo and American baseball, is the vertical pitching. Hitting the ball, as well as controlling the power and direction, is much easier. This gives the offensive game much more variety, speed and tactical dimensions than in baseball. The fielding team is forced to counter the batter’s choices with defensive schemes and the game becomes a mental challenge. The continuous communication by the batting team standing in a half circle around the dueling batter and pitcher influences the pesäpallo soundscape.  For a better appreciation of the sport, spectators must carefully tune in to the teams’s communiqués.

The male pesäpallo team Vimpelin Veto from the small village of Vimpeli in rural Finland has a very active crowd, with a high know-how of the sport. The village has only a little over 3200 inhabitants but had an average of 2087 spectators/game during the 2012 season. In a local newspaper article Veto’s player Mikko Rantalahti reveals that when the crowd is making lots of noise the visiting players’ tactical “wrong”-shouts (“väärä” in finnish), like when a pitched ball is too low, can’t be heard by the fielding players of the visiting team. The audiences’ collective shouting makes the soundscape more lo-fi and the visiting team’s communication difficult.

This tradition of strategic noisemaking has, before the use of headsets, also been heard in American football, when crowds make noise to make the vocal communication difficult for the visiting team. According to Matthew Mihalka’s PhD dissertation “From the Hammond Organ to ‘Sweet Caroline’: The Historical Evolution of Baseball’s Sonic Environment,” crowd noise in baseball is viewed as less influential since directions are sent via hand signals (44). Even though the pesäpallo manager leads the offensive play with a multicolored fan and other visual signals much of the communication is verbal.

In this video clip from the 2011 Superpesis final between Vimpelin Veto and Sotkamon Jymy, the audience tries not only to disturb the focus of the hitter, but also the communication of the visiting team standing in the half circle around the batter. Even the commentators are struck by the crowd noise and note its influence. 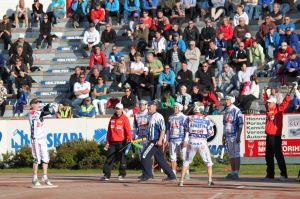 At Vetos games, the audience creates the sonic atmosphere just as in soccer. When the home team is batting, the audience engages in rhythmic hand clapping, deliberately uncoordinated with the organizers’ music. In 2012, I interviewed the managing director J-P Kujala, who is responsible for the music at Vetos games, and he stated that the atmosphere at Veto’s home games is so good that “there is no need for musical reinforcements.” He also doubted that the audience would react positively to music played to activate the audience. At the stadium, music is only heard before the game, during warm-up and intermissions. Kujala refrains from playing music when the visiting team is batting since that can be considered as “disturbing. . .we don’t do that here.”   From the organizers’ perspective, the teams are sonically treated equally, but if the home audience creates a sound wall that drains out the visiting teams’ tactical shouts—making the soundscape more “lo-fi”—it is considered as home court advantage. In this context, lo-fi is not related to the use of technology and playing music, but instead to the audience’s sounds.

However, in contrast to the Vetos’ home court sound culture, more teams are beginning to play music inside the actual game, not only when the home team is batting (2:19) but also when the visiting team is batting. DJs often use songs to create funny remarks at the visiting team’s expense. Whatever the implied interpretation of the music might be, the strategy of playing music in this core situation also modifies something very authentic about the pesäpallo experience. In this sound clip from Koskenkorvan Urheilijat’s home game one can hear the visiting team Pattijoen Urheilijat communicating underneath the Finnish hit song Älä tyri nyt (“Don’t mess up now”). Notice that the home crowd, unlike at Vetos games, is not actively making noise—hence the use of music.

As this clip shows, the increasing use of music in pesäpallo calls attention to the need to develop up-to-date rules for the use of recorded music rather than relying on custom or practice.

When discussing the soundscape of ice hockey, the most popular sport in Finland, the question is no longer about whether or not to play music but which music suits certain situations best. As in soccer, the most active fans often get cheaper tickets to fill in their own fan sections and sing from the curve behind the goals. Apart from singing along to iconic goal songs or team anthems, the fans very seldom interact with the other music played by the DJ. Moving toward a more mediated sport experience, the ice hockey soundscape is also becoming more lo-fi and the balance of sound making has shifted towards the organizers, with lots of sound events using recoded sound (music, videos, commercials etc.) to entertain the crowd during breaks of play. This shift from hi-fi to lo-fi can, according to Truax, encourage the feeling of being cut off from the environment and may begin to dramatically shift the audience’s experience of the sport (20).

There is no doubt that supporter groups have an important role as creators of meaningful sounds and good atmosphere in Finnish ice halls. In that sense it is a paradox that much of the music played “from record” overlaps their activity. John Bale has written that “fully modernized sport will alter the nature of the soundscape of stadiums and arenas […] and that electronically amplified sound will also increase and hence reduce the spontaneity of the crowd’s songs and chants” (141). The hockey example above with its planned rituals confirms this statement. Discussing and choosing the right songs for the right moment in an attempt to not only entertain but also coordinate the crowd is of course a way to deal with this schizophonic clash of sounds. A more and more common way to integrate the fans in the formation of the soundscape is the possibility of interacting with the DJ through for example Twitter. This is also a way to recognize the power relations in the soundscape.

The ice hockey team HC TPS, together with a long time sponsor, recently came up with the idea of “buying silence” and donating the spot to fans. The sponsor also provided the organizers and fans with radiotelephones. That way they could, when prompted by a text on the video screens in the hall, communicate when the spot is being played and make the best out of the situation. This innovative action alters the balance of the soundscape allowing other sounds to be produced and heard more clearly. It makes the ice hockey soundscape hi-fi again; the fans’ interaction with the environment improves and showcases how the balance in the soundscape of hockey is now entangled with the use of technology for sound reproduction.

As highlighted by the examples above, sounds play an important role for experiencing sports. For the audience, making sounds is a way to participate and interact with the event. When the use of music, at least in finnish sports, seems to increase there is also a need to identify the underlying necessity to the play music; it becomes a race to not only find suitable sport music but identify why music is played and which effects it might have on the soundscape as a whole. In soundscape research there has been a certain romanticization for hi-fi soundscapes, but in the cases I have studied there are no clear dichotomies where the one stands for something negative (lo-fi) and the other for something to strive for (hi-fi). Both hi-fi and lo-fi environments reveal power relations in how they connect to the audience’s motivation and ability to contribute with sounds, in addition to the use of technology.

Kaj Ahlsved is a PhD student in musicology at Åbo Akademi University in Turku, Finland. His research focus is on the ubiquitous music of our everyday life and especially how recorded music is used during sport events. He does ethnographic field work in team sports, mainly focusing on Finnish male teams in ice hockey, soccer, pesäpallo (“finnish baseball”), volleyball, floorball and basket. His research is funded by PhD Program in Popular Culture Studies and he is a member of the Nordic Research Network for Sound Studies (Norsound). He holds a master’s degree in musicology and bachelor’s degree in music pedagogy (classical guitar). Kaj is a Finnish-swede living with his wife and three children in the bilingual town of Jakobstad/Pietarsaari. He is, of course, a proud fan of the local soccer team FF Jaro.