Listening to #Occupy in the Classroom 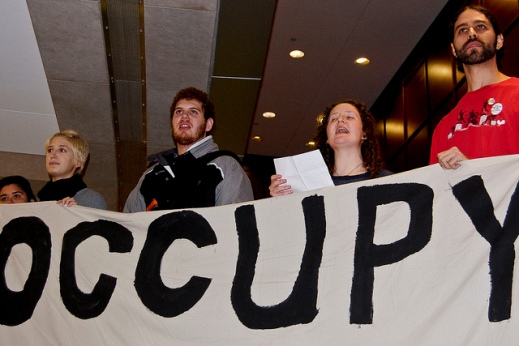 Yes, it’s that time again, readers. You are going to have to stop pretending the “Back to School” aisles haven’t been appearing in stores for the past few weeks.  We at SO! are here to ease your transition from summer work schedules to the business of teaching and student-ing with our fall forum on “Sound and Pedagogy.”  Developed to explore the relationship between sound and learning, this forum blends the thinking of our editors (Liana Silva), recruited guests (D. Travers Scott), and one of the winners of our recent Call For Posts (Jentery Sayers) to explore how listening impacts the writing process, the teachable moment, and the syllabus (and vice versa).  We hope to inspire your fall planning–whether or not you teach a course on “sound studies”–and encourage teachers and students of any subjects to reconsider the classroom as a sensory space. We also encourage you to share your feedback, tips, and experiences in comments to these posts and on our Twitter, Facebook, and Reddit sites.  As I said in the Call for Posts for this Forum: “because teaching is so crucial—yet so frequently ignored at conferences and on campus—Sounding Out! wants to wants to provide a virtual space for this vital discussion.”  This conversation will be ongoing: we will also bring you a “Spring Break Brush-Up” edition in 2013 featuring several more excellent posts by writers selected from our open call. Right now, the bell’s about to ring–so take a seat, open those ears, and enjoy this shiny auditory apple of an offering from D. Travers Scott in which he discusses how the sounds of #Occupy invigorated his classroom.  And, yes, it will be on the test. —JSA, Editor-in-Chief 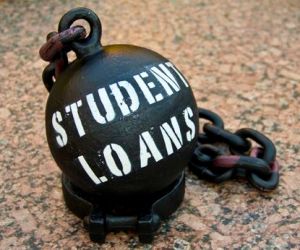 In the late fall of 2011, I was teaching a class on cultural studies of advertising. I presented the Occupy Student Debt campaign, a subcategory or spinoff of the larger Occupy movement, while we were examining ways people challenged consumer culture. We discussed education as a commodity and students as consumers. Unsurprisingly, my seniors were dissatisfied consumers. They expressed that what had been advertised to them was a product that guaranteed or at least would strongly increase their chances for quality employment (of course, it was also a product they had worked for years in creating, and one they couldn’t return.) If higher education really did land you the lucrative job it had been advertised as guaranteeing, in theory, then, you would be able to more easily pay off student loan debt. To address this dissatisfaction, I showed them two artifacts: a video from the launch in New York City on November 12, 2011,  and the OSD debtors’ pledge*.

In the video, OSD founder Pamela Brown reads the pledge one line at a time, with each line chanted back by others.  I played the video in a dark classroom. I also projected it on the room’s main screen, but I didn’t use the room’s amplification system because it sounds too much like an authoritarian public address and disperses the audio in a dominating way. External speakers connected to my laptop made the sound feel, to me, more localized and objectified, something we could focus on rather than an institutional part of the room. The students’ first reaction was, not to the words, but the sound: the verbal relay used at the public demonstration. Brows furrowed and heads cocked quizzically, they asked, “Why are they all repeating the speaker like that?” I explained how this provides additional amplification, but the students’ listening experience was instructive to me. Their unfamiliarity with a sonic practice of vocalization indicated their unfamiliarity with larger practices of collective, public social action.

Listening to OSD, and paying attention to how my students listened to it, informed me of larger contexts they needed to understand and discuss it, in ways that the object of the text did not suggest to me. It made me think about the experience and process of my students’ encountering OSD. I immediately noticed its ambient sounds of city life, which I no longer hear. These sounds of traffic, the acoustics of being surrounded by buildings, etc. gave several urban dimensions to the movement the pledge text did not. From the perspective of Upstate South Carolina, “urban” is not a simple thing, an identity or geography category, but intersectional:  our largest city, Greenville, has a population under 60,000. City noises feel not merely urban, but un-Southern, and thereby alien. (I say un-Southern rather than Northern or Yankee because another thing I’ve learned here is the inadequacy of that binary: Los Angeles, for example, is not a Northern city but most certainly is as un-Southern as New York. Cities also carry a class dimension.) Even though my school is one of the elite institutions in this area, this region is still worse off economically than the rest of the country and has a generally lower cost of living. Cities require money to live in. In spatial, class, and urban dimensions, OSD felt alien. 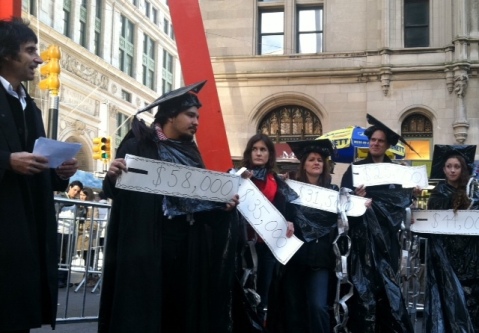 The experience of listening to the ODS rally illustrates how a sound studies perspective foregrounds experiential processes over exclusive categories of things and ideas. For example, when I read the OSD Debtors’ Pledge aloud to my students—vocalizing the text and sounds and listening to them— it brought the text into my body, making it an action. It also made students uncomfortable. Even just a round-robin reading of theory seems to make then anxious and fidgety. While I try to understand and accommodate anxieties around public speaking, I think the way sound makes a text enter the body can be a powerful affective experience. And no one ever said the classroom always had to be comfortable.  For me, reading the text aloud personalized the OSD pledge. It evoked sensory memories:  “Pledge of” evoked saying the pledge of allegiance in public school; saying “We believe” took me to attending Lutheran church services with my husband at the time where they collectively recite the Apostles’ Creed.  These associations evoked emotional disidentifications from organized religion and mandatory collective professions of patriotism. It also temporalized and spatialized OSD for me, positioning it in relations to Dallas, Texas in the 1970s and Greenville, SC today.

Overall, the reading aloud of the pledge staged a tension or dialectic of identification and disidentifications. Although I agreed and identified with the sentiments of the movement, several alienating and unsettling aspects of the pledge came through as I read aloud: the blithe collapsings of “we” and “as members of the most indebted generations” made me wary (collectives always do, but so do easy historical assertions. Really? Are we more indebted than indentured servants who came to America, or people born into slavery?), and the sudden shift to first person singular at the very end seemed jarring: (After saying “we” six times, suddenly it’s ‘I’ now – what happened?). Lastly, the numerous alliterations also had an alienating effect, making the text seem sophistic and manipulative, artificial, composed.

The auditory experience of OSD can also provide insight into how we create texts. A video of Andrew Ross shows him presenting the first, “very rough draft” weeks earlier at an OWS event. Listening to him read this different, earlier version underscores the text as process. The pledge is something that developed. While his flat tone and straight male voice do not appeal to me, they do complexify and dimensionalize Brown’s reading, giving it depth. They also show that some things that bothered me in the final version – the collectivity and alliterations – were not there. This intertextual, diachronic listening does not erase troublesome aspects of the ‘final’ text, but it mediates them. I am moved closer to it by listening to its different origin.

Arguably, any of these points could have been arrived at by good ole’ textual analysis. My point is not that listening always should supplant visual modes; sound studies tries to break that false dichotomy by not denigrating or replacing the visual but by elevating the sonic to complementary – not superseding – status. I argue that reading aloud should be a fundamental, basic component of sound studies methodology, as it allows anyone to hear, voice, embody, and experience a text. I not only noticed these aspects sooner through listening – my first time speaking it aloud, despite having read it at least a dozen times before. Moreover, I didn’t just notice them: I felt them on a personal, emotional, level, which spurs thinking and analysis that is, if not completely new and unique, definitely qualitatively different in its potency and urgency.

Listening to OWS, and the OSD in particular, brings insights affective and personal. Yes, I can read a statistic from a survey stating that a certain percentage of participants in OWS feel angry or betrayed. That doesn’t mean anything to me in a specific, personal, and empathetic way – and empathy is crucial for a social movement to garner support. Listening to both Ross and Brown, I am reflective and conflicted over my professional role – no longer a grad student, but certainly not an established scholar like Ross. I feel connected to OSD in ways beyond the literal facts of my debt. Listening draws me into a contemplative, reflexive space beyond a sticky note on my office desk saying “OWS: teachable moment.” I can see a map with big, red OWS circles over Washington D.C. and New York, but I don’t feel the distance from myself and my students in the same way—and this is crucial for my teaching and engaging them in dialogue about what could be the most significant social movements of their lifetimes.

*Even though OSD punctuates it “debtors’ pledge,” I believe it should be debtor’s pledge  because it is a pledge an individual, not group, makes. However, here I defer to the original.
—
Featured image by Flickr User  Sasha Y. Kimel
—
D. Travers Scott is Director of Graduate Studies and Assistant Professor of Communication Studies at Clemson University in South Carolina. He researches cultural and historic studies of new media, communication technologies, gender, and sexuality, often drawing on feminist and sound studies perspectives. Recent publications include a chapter in The First Time I Heard Joy Division/New Order and “Intimacy Threats and Intersubjective Users: Telephone Training Films, 1927–1962,” in the sound studies issue of American Quarterly(book version forthcoming). Current projects include co-editing with Devon Powers a special issue of the International Journal of Communication on critical historiography and revising his book manuscript, Sick: Constructing Users in Pathological Technoculture, under review with NYU Press. His former lives include advertising executive, novelist, and performance artist. You can find him at http://oneofthesethings.blogspot.com/

8 responses to “Listening to #Occupy in the Classroom” 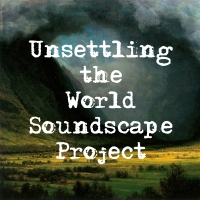