Could I Be Chicana Without Carlos Santana? 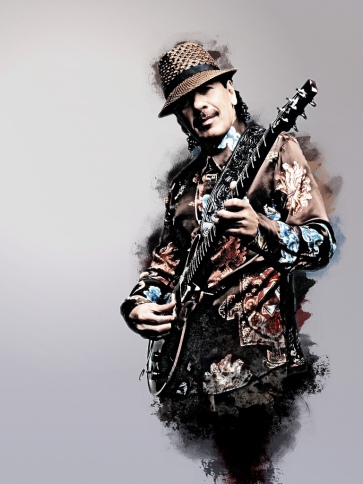 This may be a given but I have to ask: Why is the music of Carlos Santana considered “Chicano music?”

It’s true; I am a fan. And as a fan I never question why I love the music, but I often ask myself what it is specifically about the music that resonates so strongly with me. I could say that I love Santana because I love a soulful electric guitar voice, because I admire the musicianship of the band, because I feel the “sabor” they sing about, because I’ve always loved Santana. But these parts surely do not make up a satisfying the “whole.” There is something else, something about listening to the music that amplifies my sense of identification as a Chicana with other Chicanos and Mexicanos. This happens whether I’m among raza, in the various communities I call home, or whether I find myself feeling very far from Aztlán. I’ve witnessed the effect of the music – maybe you have too – when it comes on the car radio, at backyard family BBQs, and friend’s living room dance floors, the music gets your body up and connects you to your Chicano roots.

In this sense, Santana is forever part of the Chicano sounded imaginary. For Chicanos, identifying with the music of Carlos Santana may have a special meaning that has something to do with a particular Chicano/Mexicano subjectivity. Yet, for non-Chicanos, Santana still retains their quintessential American rock band status. Most of their airplay is on mainstream radio, rarely if ever on Spanish-language stations. So Santana can be thought of at once as “puro” Chicano or “classic rock,” except that Santana is a straight up fusion band. This is why I have to ask, is the music of Santana “Chicano” music? And I further wonder, could I be Chicana without Carlos Santana?

Before the Rob Thomas & Carlos Santana collaboration on the Grammy award-winning album Supernatural (1999), before the phenomenon of “Smooth,” there was classic Santana. The Santana that produced the self-titled debut album Santana (1969) and Abraxas (1970). The songs “Evil Ways,” “Black Magic Woman,” and “Oye Como Va” from these two albums are on constant rotation on “classic rock” stations well after forty years since they first hit the airwaves. Even if you’re not a fan or a music connoisseur, when listening to “Oye Como Va” or “Smooth” it’s easy to recognize a distinct “Latin-ness” about them. In part, this is because of the fusion of Spanish and English lyrics with rock, blues, jazz, and Afro-Latin musical styles. For Chicanos, this particular fusion of language and sound might also resonate as something familiar and close to home – if sound can be a home. A quick search on YouTube will lead you to the classic 2000 Grammy Awards Performance of “Smooth” and a wealth of competing claims by fans (and foes) in the comments section.

This was a special and high-profile performance so these comments are exceptionally spirited. But, YouTube is full of spontaneous, impassioned, (albeit anonymous) examples like this on any given day. I highlight these two as sort of placeholders for the idea of how sound and music mighty carry significant meaning toward subject formation in an everyday sense. These fans claim Santana both for Mexico and for the world, respectively, because they reflect a strong sense of Mexican or Chicano pride. In the first comment, the very enthusiastic fan could easily be a Mexico City native, maybe a Chicano wanting to sound like a Chilango –“ERES LO MAXIMO” is not a Chicano Spanish expression. The second fan’s comment is all in English and could be Chicano simply based on that—but those are slightly secondary points. As I suggested earlier, for Chicanos, Santana’s music has the potential to reflect a sense of ethnic history and culture. Sound can be a home. After all, the first comment claims Santana’s music for a whole country with “VIVA MEXICO!” helping to affirm the feeling that this fan and Carlos are Mexicanos together, across time and place.

When I was studying music in college, Mexican, Chicano, or Latino music was not part of the curriculum. Instead, in my private piano lessons, I would gravitate toward pieces by Spanish or Latin American composers as a sort of “good enough” way to stay in touch with my latinidad. This helped, but the fact is that Latin American art songs have much more in common with the Western musical canon than they do with my experiences and Chicana consciousness. In other words, it was a reach to identify with these composers solely because we shared a language. What would I miss in a too quick move to identify with the Latin-ness of Santana’s music this way? Would I hear only the Spanish spoken in the song? If so, then gaining a sense of my Chicana/o subjectivity by claiming “Oye Como Va” (for Aztlán?) relies on partially subsuming the specific Caribbean contexts and poetics of the song. Is this song originally Cuban, Puerto Rican? It’s really just a party song. “Oye como va, mi ritmo, bueno pa’ gozar, mulatta” Eso! Does it really matter now if Santana’s version has re-defined it for all time?

In a way, the second fan expresses a more complex desire: “Oye Como Va is universal.” Everyone knows that Carlos Santana is Mexican, some know that he is also an immigrant, and still others may have read that he grew up in Tijuana. As part of American rock music history, Santana’s roots are firmly planted in San Francisco and the Bay Area and it is well known that Santana played at the historic Woodstock Festival of 1969. Clearly, amongst other identities, Santana is a classic American rock band with long and wide appeal. But from the beginning, along with creative fusions of rock, jazz, blues, and salsa, it has been the distinctly Afro-Latino percussion core that defines their emblematic sound. And this is exactly how and why dwelling on these details in the sound of Santana matters. If Santana comes to mean or signify something like “pur0 Mexicano” or “pur0 Chicano” (in a brown pride or brown power sense) then that purity is already so productively and interestingly troubled because there is nothing remotely “pure” about Santana’s music.

Therefore, to identify with the music means confronting those complex fusions of language, race, and music that make up the Santana “sound.” To partly answer my earlier question, “Oye Como Va” is a composition by the renowned Puerto Rican timbalero and band leader Tito Puente, but the musical form, a basic cha-cha-cha, is Cuban. The song has other authors as well, that both Santana and Puente name. But ultimately, this song and indeed much of Santana’s music, comes in wake of much older histories of African diaspora, migration, colonization, artistry and spirituality. 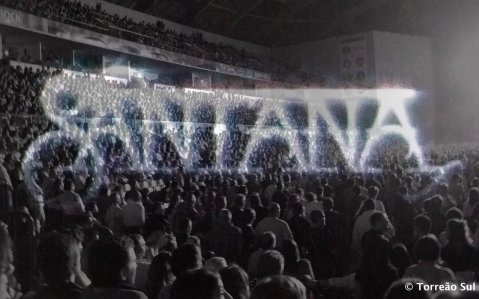 In a way, I’ve always felt that Santana’s music was making a black/brown connection, that racial boundaries were necessarily crossed or brought together because of the many histories that flow through the music. As a child of Mexican immigrant parents, I grew up listening to a wide repertoire of Afro-Latino music – elegant danzónes, romantic boleros, joyous cumbias, mad mambos, as well as more traditional Mexican music. Maybe that is also part of why listening to Santana reminds me of home. But this is perhaps too simple a response.

Santana’s music and popular image has been engaged in positive but also problematic ways in Chicana/o cultural production. Most recently, I noted this in a performance of the play New Fire, by Cherrie Moraga, in San Francisco. At a critical point in the drama, the evocative love song “Samba Pa’ Ti” is used to introduce a male character and a difficult, sexually violent scene. Moraga’s larger critique is of violent Chicano patriarchy and masculinity. The play is offered as a healing ceremony. But the association of this song, which features a famous guitar solo, with that specific scene is profoundly jarring. My sense was that Moraga selected Santana for the play’s soundscape it served as a shorthand for “Chicano.” Here, it was made to bear the history of violence of brown men against brown women and girls. This made it difficult for me to identify as a Chicana–queer and feminist–with Carlos Santana at that moment, and some time after. Surely this is also part of what “home” means.

Santana’s music interests me for these reasons, which go beyond the sounded Chicano imaginary in my headphones. What I find worthwhile in thinking further about Santana’s “sound” is how in the many acts of claiming Santana for oneself, one’s country, or one’s community, I can trace the way in which Chicano and Caribbean histories, both racialized and gendered, touch and cross in the music. That is, I see this as an invitation for the listener to reimagine notions of race, nation, gender, and sexuality even while dancing and singing along. In these ways, I see meaningful possibilities for imagining Chicana/o as a sounded subjectivity. I am certain that my sense of who I am, how I think, and how I walk in the world has been shaped by a life-long relationship with music and sound. And although being “Chicana” to me is not the same for anyone else, Santana’s music helps me to imagine a connection, a musical lineage I can trace and take part in. Santana is not my parent’s music. It’s not even my generation’s music. And, it’s not my only musical identity. But, even so, I couldn’t imagine being Chicana without Carlos Santana. Because when I listen, I do hear it, I hear how it all goes, together, and that is so, so good. “Give me your heart, make it real, or else forget about it!”

Wanda Alarcón is a PhD student in Ethnic Studies at UC Berkeley where her research involves reading Chicana and Caribbean “stories” together in a decolonial feminist vein. When she’s not living the glamorous grad student life she likes to make zines about po’try, learning new songs on her childhood piano, cooking for her loved ones, and exploring NorCal with her main squeeze. A native Los Angelena, she is beginning to appreciate thinking and writing about her beloved hometown from afar. Music helps bridge that distance. So do the trees and ocean breezes. She lives and loves kibbutz-style in Santa Cruz with her partner por vida, Cindy, their two sassy cats Lucy & Mona, and dear housemate, Ella.