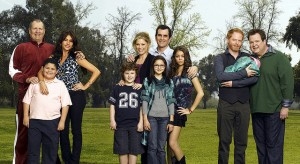 The Cast of ABC

Since debuting in 2009, American audiences have fallen in love with ABC’s Modern Family, a mockumentary comedy starring Ed O’Neill, Julie Bowen, and Colombian actress Sofía Vergara who plays the curvaceous, gorgeous, and ”accented” Gloria. Clearly a satirical comedy, the show presents three interrelated modern day versions of nuclear families. The patriarch Jay (O’Neill, formerly of Married With Children) marries Gloria, a much younger Latina who has an eleven-year-old son from her previous marriage (the wise-beyond-his-years Manny, played by Rico Rodriguez). The heterosexual suburban nuclear family is represented through Claire (Jay’s daughter, played by Bowen) and Phil (Ty Burrell) who have three children. The homosexual nuclear family is fashioned through the characters of Mitchell (Jay’s son, Jesse Tyler Ferguson), his partner Cameron (Eric Stonestreet) and their adoptive daughter, Lily, from Vietnam. The show follows the tried-and-true conventions of family sitcoms, complete with exaggerated portrayals of their characters and a feel good message delivered in 22 minutes. Our current fascination is Gloria—arguably the most popular character on the show (see her lucrative Pepsi deal here)—and the use of her “accent” to mark her Latina body. Visually audiences may be ogling over her curves, but it is her vocal body – her “accent,” tone, and staged grammatical blunders – that work to racialize her character as much as sexualize it.

Vergara at the 2011 SAG Awards

Vergara’s character Gloria hails from the same township of Barranquilla, Colombia as the actress herself. Despite her emerging star status in the U.S., Vergara is no stranger to Spanish-language television viewers. (Wilson Valentín-Escobar refers to such English-language media discoveries as “Columbus effects”). Vergara rose to fame through the immensely popular telenovela format and in recent years has gained popularity through various comedic roles type cast as the “sexy Latina.” Visually, the spitfire Latina is characterized by her red-painted lips, seductive clothing, curvaceous hips, long brunette hair, extravagant jewelry, and an inherent ability to dance. (See Priscilla Peña Ovalle’s fabulous SO! blog piece on Latinas, dance, and the “aural Otherness” of Rita Moreno). Vergara, in her personification of Gloria, embodies many of these attributes quite well. For instance, a natural blond, Vergara was forced to color her hair in order for American viewers to imagine her as an “appropriate” brown Latina.

In an equivalent vocal vein, Vergara showcases the required Spanish “accent.” Case in point, from the pilot episode:

Phil: Hi Gloria. How are you? Oh, what a beautiful dress.

The communication mishap serves as the underlying funny because of Gloria’s accent and at the expense of Gloria’s body; her voice and her body are both subjected to gratuitous scrutiny. Phil, once again in episode 5 of season 1, does understand Gloria’s “accent” but seems to confuse the context. He greets Gloria upon arriving to his house to watch a football game:

Phil: Hey, for you! [Gives Gloria a bottle of wine] Nice to see you, Gloria. [Hugs Gloria]

In this case Phil is confused by Gloria’s inflection and repeatedly mistakes Gloria’s unintentional statements as personal invitations to her body. These acts sexualize and racialize Gloria as a desired “other” because of her apparent “accent.” Once again, repeated in this scene, Claire (Phil’s wife) is required to intervene or harness her husband’s sexual prowess by announcing what Gloria means, stripping Gloria of her voice to defend herself. 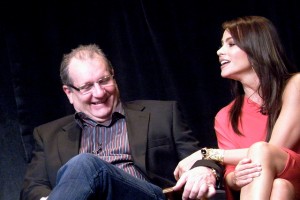 Perhaps most frustrating and audibly apparent feature of Gloria lies in her incessant grammatical errors scripted within her English-language lines. Yes, scripted. Vergara certainly has an audible “accent,” especially to Americans not accustomed to Latino-speak (although there are 35 million Latinos in the U.S.) or to those in denial that we all carry some sort of accent influenced by our social locations – class, race, and in this case, migration. But to Vergara’s own admission, she is bilingual and biliterate, which means the grammatical blunders that serve as punch lines or as a means of laughing at her, are largely owed to the script itself. Gloria’s grammar, like her “brown” hair, is an important false feature that helps make her a true Latina immigrant character.

Listeners have always struggled to make sense of one’s accent and speech style especially if the speaker’s body does not match stereotypical perceptions based on race and gender. A key study showed, for instance, that when participants were shown a recorded lecture by an Asian American woman voiced over with a white woman’s voice, they overwhelmingly insisted that the Asian American woman spoke with an Asian accent. A classic case of what sociolinguists refer to as “accent hallucination.” Listeners truly have a hard time believing what they hear or believe they hear.

In the case of comedian Margaret Cho, audiences laugh their heads off with her signature act – vocal reenactments of her immigrant Korean mother. Elaine Chun offers a brilliant analysis of Margaret Cho’s revoicings of her immigrant Korean mother (Chun refers to this as “Asian speech”). According to Chun, Cho’s comedic routines are not only incredibly funny but they offer a critique of racist mainstream ideologies precisely because Margaret Cho is read as an Asian American.

Which makes us wonder, how is Sofia Vergara read within a U.S. context and to non-Latino audiences? Ideally, folks would see her as a U.S. Latina role playing a recently arrived immigrant and offer viewers a critique of accented Latina spitfire. But alas, Vergara’s vocal performance of an immigrant Latina wrought with grammatical errors only helps her character Gloria become the quintessential racialized Other (or a true U.S. Latina).