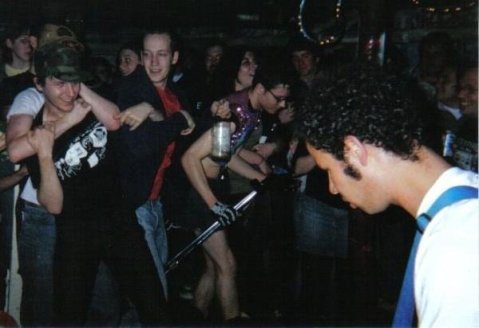 First show with The Carpetbaggers! @The Manor.

Today’s post is a bit of a confessional.  Reflecting on Andreas Duus Pape’s post a few weeks back, Building Intimate Performance Venues on the Internet, I can not help but admire how closely Andreas relates podcasting with intimacy, and therefore; authenticity. Although it would be simple to critique this point as a case of circular reasoning (Podcasts are intimate because they are authentic. Podcasts are authentic because they are intimate.), I cannot help but wonder if there is something deeply honest and deftly earnest about this claim. Speaking as a musician, I believe that authenticity is a quality that cannot be conjured. It, like a feedback loop or proof of will, seeks only itself. But, how does the desire to be authentic shape performance? Does it affect what we listen for and who we listen to?

My adventures as a musician started in high school with a second hand guitar and a lot of free time. It only took a year before my pastime became something more like an obsession. First was my high school band: The Nosebleeds. The Nosebleeds played revved up versions of 50s and 60s rock and roll while all the other kids were covering Blink 182 and Operation Ivy. We were cool – really! Even at this early stage it was clear to me, authentic rock bands played old-school rock music. Even my punk guitar heroes from the 1970s like Mick Jones and Captain Sensible knew how to cop a Chuck Berry riff and Little Richard groove. After 3 years of humid Jersey shore dive bars and fluorescent high school talent shows we called it quits. Honestly, we just got bored. Also, our ace repertoire of fifteen songs was beginning to wear a little thin. . .

After The Nosebleeds came The Carpetbaggers. This was a sea-change in compositional direction. Instead of playing punky renditions of Twist and Shout, we affected a country twang and sang songs about travel and broken hearts. If you caught us on a good night, we would even throw a bit of Sonic Youth into the mix and evoke a wall of feedback out from silence. We played in New Brunswick basements and central Jersey bars and recorded an EP on an abandoned Tascam 1” reel to reel. Buzz words being thrown around at the time were: rootsy, alternative and raw. I had pulled the covers back from a revved up Chuck Berry only to find a wonderland of Americana – washboards, harmonicas, and acoustic guitars – waiting. This was, of course, what those rocker’s back in the day were inspired by – right? If The Carpetbaggers weren’t the real thing, who was?

When The Carpetbaggers broke up I joined one last band, The Acid Creeps. At this point, there would be no turning back from my descent into nostalgia. We aimed to resurrect the late sixties go-go bar house band. Taking care to acquire vintage Fender amplifiers, vintage reissue guitars, and even a knockoff Vox Continental organ. If that wasn’t enough, my sister sewed us matching orange paisley shirts which complimented our skinny black ties and sunglasses. We imagined ourselves as a period perfect garage band, exactly the sort we had seen in movies. We covered everything from Iggy Pop’s, I Wanna Be Your Dog, to The Sonic’s, Psycho, and the Detroit Wheels version of Little Latin Lupe Lu (which we all preferred). Only in our mid-twenties, we were experts (or snobs, depending on your perspective) at defining and defending what authentic garage music was, and what it was not. Before breaking up, we created a yellow 7” vinyl tomb to forever keep our music. It was named “The Bananna Split EP,” and at the moment it all seemed perfect.  Authenticity, sold for five dollars at a show. 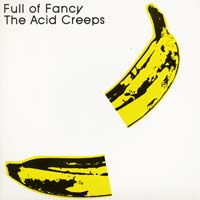 Reflecting, five years later, on these three epochs of music making – it is hard not to blush. Not only did I, for at least a year, consider each band the singular most authentic band ever; authenticity, as an ideal, began subtly to change the way I viewed myself. I transformed from Aaron the Weird Al Yankovic fan to Aaron, the garage rock expert in about 8 years. Wherever I looked for authenticity, I found it, and it was real. Not only that, but at the bar, we convinced ourselves and our friends of this notion. Conversations about which bands got it, and which did not, were frequent – if not mandatory. The answers became standard too: The Exploding Hearts, The Murder City Devils, The Misfits? They all got it. Bands like Metallica; for the most part, they did not. These conversations forever led us to equate the authentic with the obscure; a rabbit hole that twists and darts endlessly.

Authenticity in music is like feedback: powerful, seductive and dangerous. It is a very real, yet elusive concept that invites imitation and when left unchecked, can spread like a contagion. Although I love revisiting the music of my old bands, I cannot help but hear them now as a set of key moments in a greater life narrative. Iterations of myself left behind in an ongoing dialogue about authenticity. A dialogue, which, to this day, affects what music I choose to listen to, and what music I choose to avoid. Although none of my bands were truly “the real-deal,” it would be odd to claim that any were not authentic. Rather, this concept, authenticity animated each band – it kept us all going, and brought our music to life. My bands were authentic because I believed in them. I believed in my bands, because they were authentic.

Aaron Trammell is co-founder and multimedia editor of Sounding Out! He is also a Media Studies PhD student at Rutgers University.