Rallying Cries as Suffering Sounds: “Allah-O-Akbar” and the Aurality of Feminized Iranian Suffering

By July of 2009 dozens of pitch-black videos began to appear on YouTube. Documenting ambient noise, in some cases narration and, most prominent of all, impromptu collective outcries of “Allah-o-Akbar,” these videos resonate with an urgent gusto, punctuated with an eerie sense of desperation through faint echoic reverberations. By the level of desperation audible in every voice, at once dulcet and melancholic in tone, there is a distinct sense that Allah very well may be called forth. While most of these videos received scant attention, one entitled “Inja Kojast”](translated as “Where is this Place”) received over 174,000 hits (as of writing).

It was dubbed with English, Spanish, and Japanese subtitles, was sampled by a music producer (“Tehran’s Roof Tops _Remix”) and also played a prominent role in the 2010 French film Fleur du Mal. What is enabled, invoked, and signified by the layering of these multiple and disparate incantations? What is affectively evoked in the widespread circulation of these chants by YouTube and in Fleur du Mal? Why was this video circulated so widely and deemed so affectively resonant by disparate audiences?

Due to the fact that the Iranian government had barred entry to representatives of foreign media and systematically jailed Iranian journalists accused of being hostile to the regime, the disputed 2009 Iranian elections and ensuing protests were largely reported on by a new breed of “citizen journalists”. Filling in the information vacuum, citizen journalists tweeted and uploaded to the Internet raw video footage of protest marches and confrontations with Basiji militiamen by day – and the voices of dissent performed on Iran’s many rooftops by night. Donning the cloak of darkness, residents of Iran’s major cities climbed to the rooftops of their buildings to chant “Allah-o-Akbar” in numbers – a brief reprieve from the violent suppression of their street protests by Basiji militiamen. 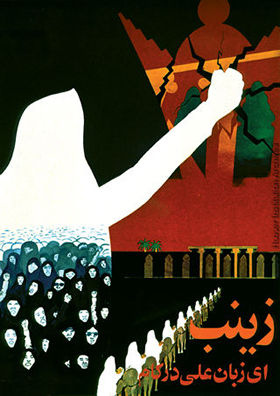 As Negar Mottahedeh has written in her online essay “Allah-o-Akhbar”: “The cry of “Allah-o-Akbar” was the defining sound of the 1978 protests against the Shah of Iran, during a revolution that toppled the Pahlavi monarchy and established the Islamic Republic of Iran.” This earlier revolutionary context is represented in the video for “Allah o Akbar, Khomeini Rahbar”, which hailed a politically diverse citizenry to stand behind this “rahbar” or new “leader.” The chanting of “Allah-o-Akbar” was further exploited as a nationalistic call-to-arms during the Iran-Iraq war in the music video for the anthemic “Allahu Akbar Iran, Iran.” The chant’s versatility and instrumentality in this immediate post-revolutionary period is due not only to its capacity to appeal to the pious and patriotic backers of the newly formed Islamic Republic but also because of its power as a performative political rallying cry. Mottahedeh’s essay title employs a pun: the addition of ‘h’ to the word “Akbar” in transliteration changes the word to “Akhbar” or news. Although she does not elaborate on this, her title suggests that this chant is itself a form of citizen journalism, a broadcast calling forth the revolutionary spirit that Iranians pride themselves for always having at the ready. But what kind of journal is “Allah-o-Akbar”? Is it a call to arms, a rallying cry, a collective sound of suffering or all of the above?

Despite its pious provenance and deployment as the paradigmatic cry of the revolutionary uprising against the Shah, the Islamic Republic currently led by Ali Khamenei and Mahmood Ahmadinejad–which was inaugurated by these earlier revolutionary calls–has interpreted the post-2009 chanting of “Allah-o-Akbar” as blasphemous and an affront to their authority. Journalist Jalal Hosseini argues that this is due in part to the fact that opposition candidate Mir Hossein Mousavi called upon his supporters to remember the revolutionary history of this performative chant in an open letter, stating “Let’s not abandon the green colour which is a symbol of spirituality, freedom and religious mentality and moderateness and the Allah O Akbar slogan that tells us of revolutionary roots.”

Women at the Front, 2009, Image by Flickr User Raymond Morrison

As Hosseini has written,  “In a religious state, where religion is present in every aspect of life, Iran’s protestors have managed to turn religion against their government…Allah-o Akbar is perhaps the single most symbolic phrase in the Muslim world, yet Iran’s current rulers, who themselves employed this slogan in their struggle against the Pahlavi regime in the 1979 Revolution, did not tolerate the protesters’ cries of Allah-o-Akbar after the 2009 presidential election. Allah-o Akbar has essentially become a forbidden phrase.” Hosseini goes on to quote numerous Tehranis who testify to their disparate intentions behind the chanting, highlighting the ambivalence inherent to the slogan, which makes it available to Iranians of many stripes, and, as he argues, allows the calls to resonate even beyond the nation by appealing to other Muslims globally. But the widespread circulation of these videos and their popular impact on global YouTube audiences also suggests that the chanting has had an impact on non-Muslims as well.

Susan Moeller, who penned a Huffington Post piece right around the time of “Inja Kojast’s” semi-viral circulation, argues that this most recent phase of the chant’s resignification has helped to win Americans over to the protesting Iranian’s cause, writing, “watching Americans are learning to reframe the meaning of ‘Allah O Akbar’ and re-imagine the people of Iran. The pictures from Tehran are showing that Iranians are not monolithic in their beliefs.” Moeller suggests that this collective chanting has somehow cut through the status quo Islamophobic representations of a fundamentalist Iran to create an affective and empathetic pathway through which Americans can “re-imagine the people.” Moeller’s argument echoes the sentiment of the comments written on the YouTube page for “Inja Kojast,” comments like “This breaks my heart!” left by Annabanana23663 or “I have listened to this so many times already that you would think I would have moved on BUT I continue to listen and will continue to listen for there is truth in that voice of pain. And only by embracing pain can we love truth. And truth not only will set us free but without truth we cannot be free. Go you beautiful Persians. The people of the USA love you for your defiance” (by YouTube viewer HulkSmashPunyHumans). 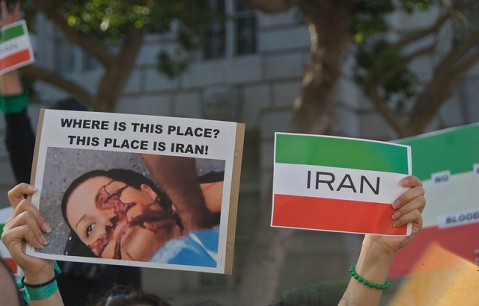 Not only were YouTube users impacted by “Inja Kojast” but the video’s representation of Iran’s rooftop chants inspired the narrative arc of French filmmaker David Dusa’s Fleur du Mal (Flowers of Evil, 2010), a film that explores the precarity and instability of Iran after the 2009 elections. Through a chanting scene in which the two main characters, Gecko (Rachid Youcef) and Anahita (Alice Belaïdi), vociferously call out “Allah-o-Akbar” on the edge of a rooftop in the avowedly anti-Islamic nation of France, they thumb their noses at both nation-states at once while also sealing their romantic bond. Perhaps in an ironic play on Khomeini’s exile in the same city, the beautiful, educated and upwardly mobile Anahita is incubated in Paris for a time while the political instability following the 2009 elections settles down. Completely obsessed with the post-election struggles that she and her friends were actively engaging in on the streets of Tehran, she daily follows every new tweet and YouTube video. She bides her time in Paris by convincing Gecko, the bellhop at her swanky hotel, to give her a tour of the city and the two soon become lovers.

Despite the somber context of the film’s main narrative preoccupations with Iran’s botched 2009 elections, this plot point, I argue, enables the cathexis of an Orientalist drive that is shared by Western audiences: a drive to consummate the desire for the feminized Muslim woman seen to have suffered under the despotic rule of Muslim masculinity. It is this same desire that gets sublimated in a consumption of feminized Muslim suffering which has led to a reductive popular reading of “Inja Kojast” that eclipses the ambivalence of and disparate intentions behind the chanting it documents. In particular, it is through the cries of the narrator’s own female sounding voice that “watching Americans are learning to…re-imagine the people of Iran” as finally available to and eligible for their empathy, attention and yearning.

Fleur du Mal weaves narrative scenes with YouTube footage of Iranian post-election street protests and, in one scene, an image of Neda Agha Soltan’s assassination. Viewed over 1,200,000 times (as of this writing), there has been a wide-scale promotion through documentary films, video diaries, songs and various other imagery of what has been called Neda’s martyrdom for Iran’s “green revolution”. This representation of a feminized Iranian suffering at the hands of an Islamic fundamentalist Iranian masculinity has become a privileged symbol for Iran’s Green Movement outside of Iran. This has enabled an affective attachment to be made which has, quoting Moeller yet again, enabled Americans to “re-imagine the people of Iran.” This time, somewhat counter to Moeller’s claim, it is not only “pictures” that are functioning to transform perceptions of Iranians; sound operates as a critical conduit to an interiority characterized by pain and suffering that has particular appeal.

As US-backed Israeli war-drums are beaten, and as conspiracy theories regarding Iran’s hand in the recent spike in oil prices resuscitate decades-long antagonisms, we must be mindful of the multi-sensorial cooptations of empathetic and affective attachment that have constructed feminized suffering as justification for military intervention and the instrumentalization of sound in support of this. The old Orientalist desire for a feminized opening through which to re-imagine and know the radical other that is Iran has been found through a new gateway: aurality.

Roshanak Kheshti is Assistant Professor of Ethnic Studies and affiliate faculty in the Critical Gender Studies Program at the University of California, San Diego. She is currently completing a manuscript entitled “Modernity’s Ear: The Aural Imaginary and the World Music Culture Industry,” which theorizeshow an other to the listening self is racialized and gendered within the world music listening event. She has published in American Quarterly, Feminist Studies, Hypatia and Parallax.