I Been On: BaddieBey and Beyoncé’s Sonic Masculinity 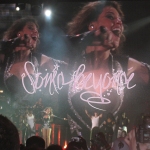 This September, Sounding Out! challenged a #flawless group of scholars and critics to give Beyoncé Knowles-Carter a close listen, re-examining the complex relationship between her audio and visuals and amplifying what goes unheard, even as her every move–whether on MTV or in that damn elevator–faces intense scrutiny.   Last Thursday, you heard our Beyoncé roundtable podcast featuring our first two writers, Priscilla Peña Ovalle (English, University of Oregon)  and Kevin Allred (Women and Gender Studies, Rutgers)–as well as Courtney Marshall (English, University of New Hampshire) and Liana Silva (Editor, Women in Higher Education, Managing Editor, Sounding Out!).  In the remaining weeks of the series, we will hear from Liana  and Madison Moore (Research Associate in the Department of English at King’s College, University of London and author of How to Be Beyoncé).  Today, Regina Bradley (writer, scholar, and freelance researcher of African American Life and Culture) introduces us to the sonic ratchetness of Baddie Bey.–Editor-in-Chief Jennifer Stoever

My husband is low key in love with Beyoncé. While he has yet to admit to any type of commitment to Mrs. Knowles-Carter – I’ve interrogated him thoroughly after each “I can appreciate her craft, babe” commentary – he holds her latest album hostage in his car. Beyoncé played in my car only once, but I enjoyed our brief encounter. I listened to the album as a testament of Beyoncé on her grown woman shit: a smorgasbord of vulnerability, independence, and [good] sex.  “***Flawless” is my favorite track, a testament to the complexities of performing (black) womanhood in popular spaces. 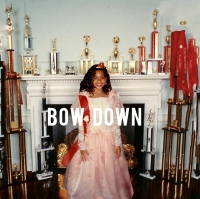 However, I’m more so interested in the sampled track that didn’t make the final cut, “Bow Down.” “Bow Down/I Been On.,” released in March 2013, shows Beyoncé’s responses to idealistic black womanhood (i.e. quiet lady-hood that is not assertive), deeply rooted in her southern upbringing. The sonic tensions between Beyoncé’s ‘normal’ performance voice and the introduction of performance identities such as BaddieBey point to Beyoncé’s increasing unwillingness to cater to a type of sonic respectability that parallels the conservatism of the black middle class. As I write in a previous essay, BaddieBey is a sonic invocation of ratchetness – a performance of black women’s contemporary (dis)respectability politics – in which Beyoncé distances herself via sound from the established ideas of womanhood that she visually satisfies.

Thus, in “Bow Down/I Been On” Beyoncé builds a layered sonic narrative to destabilize the concrete sexual politics she grapples with in her music. While “***Flawless” shows Beyoncé’s evolution of self-consciousness and ultimately women’s empowerment, in “Bow Down” I hear her conduct the grittier and more controversial work of questioning gender norms in popular culture. “Bow Down/I Been On” presents and blurs useful tensions of gender and consciousness in an ever-present conversation of what and who dictates respectable womanhood in popular culture.

“Bow Down/I Been On” features the production work of hip hop producers Hit Boy and Timbaland. The first half of the track, titled “Bow Down” and produced by Hit Boy, sounds like a bass heavy Nintendo video game. The aggressiveness of the track – hard-hitting snare drums and synthesizers in addition to the video game sonic aesthetic – complements a high-pitched, autotuned voice introducing Beyoncé. Beyoncé introduces BaddieBey as her hip hop masculine bravado persona on the second half of the song “I Been On” produced by Timbaland. (Beyoncé’s “BaddieBey” persona stems from a YouTube video by Atlanta, Georgia Girl group The OMGirlz talking about why Beyoncé is bad.) The second half is a stark departure from the first half: a slower tempo that accompanies a deeper voice. Unlike Sasha Fierce, a visual characterization of the hypersexual and hyperindependent aspect of Beyoncé’s performances, BaddieBey is unequivocally southern, sonic, and ratchet.

The auto tune in the first half distorts immediately recognizable touchstones of Beyoncé’s femininity. The voice’s ambiguity points to Beyoncé’s nickname of “King Bey,” an intentional collapse of gender performance as the foundation of her influence and power as an entertainer. The “Bow Down” announcer doubly signifies the arrival of Beyoncé’s verse on the track and the destabilization of available cues of respectability. It is from this perspective that I ground Beyoncé’s emphatic use of bitch in her demand for those around her to “bow down bitches!” Rather than remaining attached to the definition of bitch as directed at women, Beyoncé uses the sonic tropes at play to decentralize gender norms.

BaddieBey also forces the (mis)understanding of what it means to think about Beyoncé as “sounding like a good girl.” Her vocalization, reminiscent of Houston’s chopped and screwed production style – the extreme slowing down of a track and the resulting slurring and distortion of voice – dismounts Beyoncé from international recognition and makes room to (re)claim space to experiment with the boundaries of her womanhood and its recognizable aspects. The deepness of her voice does not fit within the more recognizable and established feminine context of Beyoncé as an R&B diva. Criticism of the track denounced her use of the word “bitch” and those unfamiliar with chopped and screwed denounced it and in the most extreme comments called it “demonic.” The (hyper)masculinization of Beyoncé’s voice in this track signifies her attempt to situate herself not only in hip hop’s masculine discourse but southern hip hop and its renderings of the south as a similarly masculine space.

BaddieBey gestures towards what I suggest is a type of sonic drag – using sound to bend markers of gender performance in order to blur characteristics of black masculinity and womanhood. The sonic intonations of chopped and screwed give Beyoncé a pass to dabble in ‘ratchet-speak,’ sonically alluding to images of “gold fangs” and “smacking tricks.” In the track she sonically blends hip hop bravado and misogynistic representations of black womanhood, and in that way stretches what is considered respectable. In other words, BaddieBey signifies Beyoncé’s awareness of hip hop as a space of (exaggerated) gender performance.

This awareness is also rooted in a specific place: her hometown of Houston, Texas. As I previously stated, BaddieBey centralizes Houston as a departure point for Beyoncé’s hip hop sensibility and as a space for excavating the complexity of her gendered identity. Conceptualizing place as an element of southern black women’s respectability helps situate it as a cultural aesthetic. In this instance, respectability as a tangible discourse is situated within [southern] hip hop. Beyoncé’s remembrance of Houston’s “cultural essentials” – i.e. Frenchy’s Restaurant, Boudin sausages, dookie braids, and “candy paint” – signify a simultaneous existence with her usual declaration of finer, higher classed possessions like high priced labels, global jet setting, and jewelry. 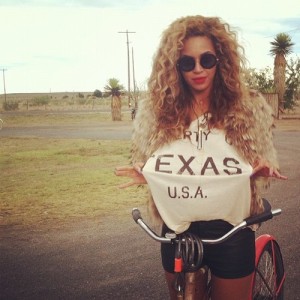 From Wildfox Couture, Beyonce in a “Property of Texas” v-neck tee

Beyoncé’s declaration of returning to “H-town” and its cultural “essentials” within a sonic space re-situate her within not only Houston but a larger southern hip hop narrative that overlaps with her higher-classed — and therefore more respectable – celebrity status. Thus, “Bow Down/I Been On” becomes a sonic space that enables the listener to become aware of Beyoncé’s complicated performance narrative in ways simple lyricism does not allow. Building upon Guthrie Ramsey’s observation of music as a working space where the ‘invisible function’ of ethnic performance is panned out, “Bow Down/I Been On” challenges the listener to reconsider how Beyoncé’s (sonic) identity politics and performances intersect with racial performance. Hip hop, especially in its commodified form, speaks best to these tensions between gender performance and lived experience.

In the tension between gender performance and lived experience lies BaddieBey. Her alter ego is a kind of sonic female masculinity. With Kai Azania Small’s “genderqueer” reading of Beyoncé in mind, BaddieBey is a possible extension of Small’s hypothetical question of if Beyoncé had a penis. (Small presented a paper entitled “The Specter of Sasha Fierce and the Scopic: Freighting of Beyoncé’s Trans/Genderqueer Body” at the 2012 Queerness of Hip Hop Conference at Harvard University.) Because sound is capable of working as a gray performative space, Beyoncé ruptures conservative gender roles that are frequently treaded in popular spaces like hip hop by establishing her (dis)respectability.

BaddieBey manifests within the interstitial spaces of sexual performance and gender norms seen in hip hop. She is the sonic manifestation of Beyoncé’s hip hop sensibility that allows her to permeate if not penetrate hip hop as a hypermasculine space. BaddieBey is most demonstrative of Beyoncé’s ability to navigate “Bow Down” as her rendition of a hip hop ‘diss track,’ dismissing her haters and those overly criticizing her position as a pop singer. Beyoncé’s performance of hip hop female masculinity allots her room to present herself not as a braggart but as a dominant force.

In this context then, the use of “bitch” in the chorus and later “trick” is doubly bound by hip hop’s gender specific misogynistic outlook on women of color and the gender-neutral use of bitch as an adjective to describe lack of talent or weakness (i.e. “bitch made”). BaddieBey forcefully treads the line of respectability through those words. For example, she sonically parallels her pimping of “the game” to the pimping of women heard in Texas rap. This occurs in her rendition of lines from Texas rap duo UGK’s track “Something Good.” BaddieBey raps: “Didn’t do your girl but your sister was alright, damn/In ya homeboy’s Caddy last night man, ha ha/Hold up, Texas trill.” The UGK version, much more explicit, is toned down in BaddieBey’s rendition. Still, in quoting UGK BaddieBey establishes herself as an entity separate from Beyoncé and even Sasha Fierce. She is an Othered representation of Beyoncé’s otherwise conservative sexuality. Yet the “tone down” of the lyrics can be read as Beyoncé’s awareness of (hip hop) masculinity as a misogynistic performance of black sexuality. BaddieBey’s laugh at the end of the verse marks the blurring of performance and reality. 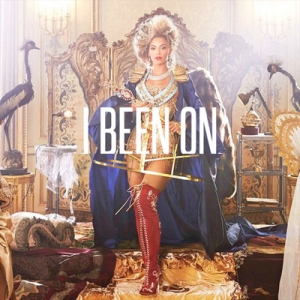 “Bow Down/I Been On” provides insight into the clever ways Beyoncé uses instrumentation and sound production to fragment her persona limited by investments in her visual image. It blurs clean-cut negotiations of black women’s identity and respectability as literal discourse by introducing the concept of sound as an agitator of black women’s expression and its analysis. The fluidity of sounding gender makes room to confront the static and heteronormative discourses through which the performances of these aesthetics manifest. Reliance on sonic narratives complements visuality in ways that usefully problematize how we negotiate contemporary race and gender politics in hip hop and ultimately popular culture.

On Sound and Pleasure: Meditations on the Human Voice – Yvon Bonefant