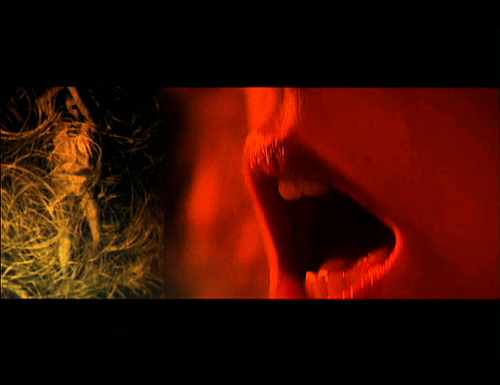 To conclude our Hysterical Sound series, we are pleased to present an excerpt from John Corbett, Terri Kapsalis and Danny Thompson’s performance of The Hysterical Alphabet.

Through this series we have explored a history of fetishizing women’s hysterical vocalizations with Gordon Sullivan’s post on Clayton Cubitt’s video work, and my post on Sam Taylor-Johnson’s film Hysteria and it’s relation to the “silence” of hysteria in medical history.

Today, Kapsalis gives us a piece in which “the ABCs are seized in a convulsive fit,” each letter of the alphabet serving to introduce some episode of the history of hysteria. Accompanied by the sound design of Corbett and Thompson’s visual collage, this performance of The Hysterical Alphabet offers a multi-sensory engagement with the past to “disprove the theory that time heals all wombs.”

SO! is grateful to the artists for sharing their work with us.

Inspired by primary medical writings and actual case histories, “The Hysterical Alphabet” tracks the 4,000 year history of hysteria starting with A in ancient Egypt. First published as a book with text by Terri Kapsalis and drawings by Gina Litherland, it subsequently assumed a different form as a performance featuring video and live soundtrack. Terri Kapsalis (voice), John Corbett (sound), and Danny Thompson (video) performed the feature length piece from 2007-2012 in many different venues, including the Art Institute of Chicago, Emory University, RISD, Bates College, Clark University, and the University of Chicago. The video documentation included here excerpts the letters S, T, U, and V, which focus on the 19th century, moving into the 20th century, and were drawn from the work of Charlotte Perkins Gilman, S. Weir Mitchell, Jean-Martin Charcot, and Sigmund Freud, among others.

John Corbett (sound) is a writer, sound-artist, and curator. He is the co-director of the art gallery Corbett vs. Dempsey. In 2002, Corbett served as Artistic Director of JazzFest Berlin, and he co-curated the Empty Bottle Festival of Jazz & Improvised Music for nine years. He is the producer of the Unheard Music Series, an archival program dedicated to creative music issues and re- issues, and he is the author of Extended Play: Sounding Off from John Cage to Dr. Funkenstein and Microgroove: Forays into Other Music. Corbett can be heard on a number of CDs including I’m Sick About My Hat and has brought his sound skills to two previous Theater Oobleck productions.

Terri Kapsalis’ (text/sound) writings have appeared in such publications as Short Fiction, The Baffler, Denver Quarterly, new formations, Public, and Lusitania. She is the author of Jane Addams’ Travel Medicine Kit, Hysterical Alphabet, and Public Privates: Performing Gynecology from Both Ends of the Speculum. Kapsalis is a founding member of Theater Oobleck, works as a health educator at Chicago Women’s Health Center, and teaches at the School of the Art Institute of Chicago.

Danny Thompson (video) is a founding member of Theater Oobleck, for which he has written (and performed in) 20 plays and solo performances, including Necessity, Big Tooth High-Tech Megatron vs. the Sockpuppet of Procrastination, and The Complete Lost Works of Samuel Beckett as Found in an Envelope (Partially Burned) in a Dustbin in Paris Labeled “Never to be Performed. Never. Ever. Ever. Or I’ll Sue! I’ll Sue from the Grave!!! The latter was given the “Comedy Excellence Award” at the 2000 New York Fringe Festival, “Top Ten of the Fest” at the Edinburgh Fringe Festival in Scotland, and extensively toured the U.K. and Ireland.