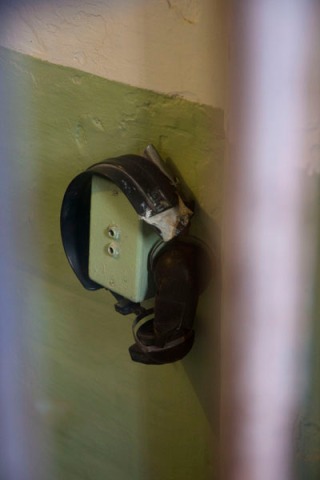 In Alcatraz, prisoners were allowed to listen to radio via this two-channel device; Image by Flickr user adrian8_8

The first thing I noticed about 4-block was the silence. It was so quiet that every time I sat on my bunk I fell asleep. The Reformatory was always one continuous roar, musicfrom radios and televisions, noise from guys shouting to one another up and down the block, it seemed to never end. But in Jackson it was very, very different. The daytime hours you could hear typewriters and the closing of cell doors, the phone at the guards desk ringing but that was it. And after 9:00 PM you heard absolutely nothing …” –“Chet” (qtd. in Music Behind Bars: Liberatory Musicology in Two Michigan Prisons, 66-67)

Film and television usually portray prison as the loudest place on earth, filled with nonstop clanking and shouting and slamming, the noise reverberating sharply off its  hard, flat surfaces. Actually, prison is much more likely to be a binary soundscape: either too loud or, at times, inhumanly quiet.

In fact, the manipulation of the sonic environment behind bars is part of the punishment mechanism itself, imposing or withholding different kinds of sound from different kinds of prisoners. There is a long history of prison music and prison radio, often within the context of education and activities aimed at recreation and rehabilitation, but here I’m talking about the mundane sounds of closing gates, locking doors, intrusive PA announcements, whirring fans, banging buckets, clattering garbage cans, and of course the human voice at any and all hours and volume levels: the inescapable sounds of quotidian prison life. The denial of the inmates’ ability to control that soundscape for themselves—or the compulsion that they do—thus becomes an issue not just of penal policy, but, interestingly, of media policy as well.

Indeed, the most fascinating questions in media policy these days are arising not at the FCC or OFCOM, but in places where policy scholars don’t usually look: schools, cinemas, and prisons. The state may have a lock on binding legislation, spectrum allocation, and international trade agreements, but it is the everyday policymakers on the school board or in the guard tower who directly affect more lives. With their pronouncements on which media forms may be used by whom, in what ways, and for what purposes, such accidental policymakers seek to regulate behavior through culture. Therefore, it is crucial to consider: which behaviors? which culture? and with which understandings of the relationship between the two?

One such instance of vernacular policymaking came last year when the Bureau of Prisons began testing the use of mp3 players in federal prisons, a technological update on rules that already allowed radios, televisions, and portable cassette or CD players.  The move opens up new vistas of choice and control for the prisoners, who are no longer limited to the 20-30 cassette tapes or CDs for their Walkmen that cell space allows, nor dependent on the spotty radio reception in the rural areas where many prisons are located (a spatial impact which itself is an effect of multiple layers of ideology, policy, and control). Unsurprisingly, the players have become many prisoners’ most prized commodity, though the control they may exercise is far from absolute. The song selection is vetted by authorities (no “Cop Killer” in the Penitential Jukebox, don’t you know) and a remote kill switch allows the warden to brick the player should an inmate’s privileges be revoked, or in the case of theft or barter (trading goods and services is almost always a no-no in prison, a prohibition only slightly more effective, one guesses, than the ban on masturbation).

JPay’s JP4, The most common Mp3 device in U.S. Prisons

The introduction of mp3 players reveals not just the power and problems of local policymaking but the ways in which sound functions within a carceral system. For authorities, sound is “noise” when it interferes with security and a disciplinary tool when it doesn’t.  As Robert Powitz’s article, “A Simple Primer on Jail Noise Control” reminds readers of American Jails, the trade publication for the prison industry, “Good security practices dictate that we want to hear certain sounds, particularly those associated with malfunctioning mechanical systems such as ventilation and plumbing, and more importantly, we need to hear a correctional officer’s call for help, an inmate in distress, and even seditious conversation” (Sep./Oct. 2007, 104).  While it is surprisingly nice that Powitz  threw “an inmate in distress” in the article, he otherwise presents an exclusively top-down rationale for separating sound from noise; Michel Foucault’s emphasis on the visual panopticon notwithstanding, which several scholars have critiqued, aural surveillance is equally important to the well functioning disciplinary institution and the production of docile bodies. 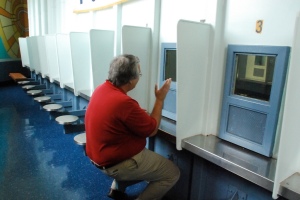 Sound that American Jails would not classify as “noise”— i.e. sound that doesn’t interfere with security operations—is not merely incidental ambience, however, as the well-regulated soundscape produces its own disciplinary effects. The tortuous sensory deprivation of solitary confinement commonly includes the removal of sonic stimulation: silence as punishment. Already in the 1830s Alexis de Tocqueville critiqued the cruel silence imposed on prisoners in the U.S., and contemporary research repeatedly confirms the mentally destabilizing effects of sonic deprivation (see e.g. here and here).  Total sonic deprivation is merely an extreme, however; there is an array of situations involving sound management. For example, conversations with visitors often occur through soundproof glass; obviously the surveillance function of this setup is paramount, but the distanciating filtration of the telephone adds further punishment through physical denial of the unmediated sound of a loved one’s voice. The raucous cacophony of the daytime cell block, meanwhile, acts efficiently as population control of another kind: as an incentive to self-regulate so as to enjoy the perks that enable one to escape the noise. The routines of prison policy intersect with the technologies of media policy to turn the chaotic soundscape into good behavior, through the mechanism of a prisoner’s desire for a pair of earbuds and some familiar tunes. (Media policies also turn that soundscape into a profit center: tracks on the prison’s version of iTunes cost between $1.29 and $1.99, obviously more than the going rate on the outside.)

Via the regulation of the aural environment, the authorities’ “sound”—the elements of the sonic environment that they impose or, at least, see no need to reduce or eliminate—thus becomes the prisoners’ “noise,” while prisoners’ “sound” can be either provided or withheld as part of the disciplinary and economic logic of the carceral system as a whole. As one prisoner, “Marcos,” summarized the system:

They pacify us with these so-called liberties, such as personal TVs, personal radios, personal guitars, tapes, cable TV, a complete store like the free world. And plenty of sports! Why–they call this our rights. In actuality it’s a break down in our system” (qtd. in Elsila, 56).

Such are the effects of so-called “personal” media for such an impersonal environment, for individuals who have been turned into social non-persons: media policy disguised as personal liberty rather than mass prisoner control.  This disguise often fools the “throw away the key” law-and-order types who object to coddling criminals with the current Kenny Chesney track; for them, it is worth mentioning that the computers where prisoners download songs for their mp3 players are appropriately called—no joke—“Music Wardens.”

Foucault’s great metaphor for the disciplinary society—the prison as a template of surveillance and control that has been adapted to all spheres of modern life—becomes punishingly literal behind bars, but that is merely where it is most visible or, often, audible. As I explain to my students, media policymakers claim merely to regulate gadgets, physics, and economic relations, but in fact they are always and inevitably also regulating bodies and ideas. The production of the prison soundscape reveals the relation of policy to conduct, a relation that in everyday life often remains cloaked behind scientific and legal discourses.

A final point: equally punishingly literal is the notion of media effects held by those policymakers in the prisons. Inveterate behaviorists, they imagine–and then attempt to manipulate–a direct causal relationship between media consumption and action, between sound and deeds. Those manipulations, however, are a broken media policy for a broken system. As Marcos put it, speaking of the many entertainment options available to the docile inmate: “Even before I ever could imagine I was going to end up in prison, never in my wild imagination could I expect it to be this easy. Yes I said easy. We have no serious form of rehabilitation. . .Why does the state spend more on activities than education?”

Thanks to Genevieve Spinner for invaluable research assistance on this project.

Bill Kirkpatrick is Assistant Professor of Media and Cultural Studies in the Communication Department at Denison University. His ongoing research and teaching interests include media history and cultural policy; impacts of popular culture on American public life; theories, practices, and future of citizen-produced media; and media and disability. He is also co-producer of Aca-Media, a monthly podcast that presents an academic perspective on media. You can find out more at www.billkirkpatrick.net.

Prison Music: Containment, Escape, and the Sound of America—Jeb Middlebrook