*Dedicated to the love we hear in our mothers’ accents. This post is co-authored by Sara V. Hinojos and Dolores Inés Casillas

The Cinco de Mayo season showcases troubling instances of Spanish being mocked. Corporate ‘merica profits from Drinko de Mayo when menus advertise “el happy hour”; words like “fiesta” and “amigo” are overused; and Spanish hyperanglicized for laughs (one of the worst: “COM-PREN-DAY”).  These acts of linguistic privilege, according to Jane Hill, elevate whiteness in public spaces. What is heard as playful for the dominant ear is simply an acoustic representation of the racist appropriation of mustaches, sombreros, and sarapes.

Said no Juan ever

That said, bilennials have struck back.

Last year, the Latino digital platform, we are mitú, published a list that resonated with its young, bicultural readers, those long accustomed to hearing Spanish Accented English (SAE) as part of their everyday speech: 17 Popular Brand Logos If They Looked The Way Your Parents Pronounce Them.  This humorous phonetic play in the face of complaints about foreign accents being unintelligible or moral indignation over immigrants who do not learn English with native-like proficiency re-directs our attention to digital, engaged Spanish-English bilingual communities. Like Chicana/o listening practices, these digital memes, gifs, and lists embrace how these accents invoke sounds of survival, solidarity and place making. 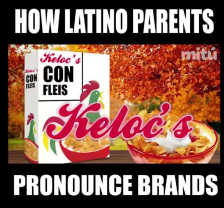 The witty Buzzfeed-ish list re-spelled English-language global logos in Mexican, immigrant styled phonetics to reflect how said stores, brands, and social media sites are heard within Spanish-dominant or bilingual speaking communities. The absence of letters (Cosco) and/or the substitution of letters (Gualmar) induce an “accented” non-English dominant speech, dislodging standard rules about English-language spelling and pronunciation. Readers chuckled at seeing immigrant, ESL (English as a Second Language), phonetic speech in print – a tactic Sara V. Hinojos refers to in her media writings as a visual accent, or a visual vocabulary based on sound.

In order to “get” the humor behind the wave of memes and gifs that use Spanish Accented English (SAE), Chicana/o readers rely much more on their listening ears than their eyes to understand how these accents are voiced in print. Here, listening to accents operates as a popular form of literacy, one that registers the audible, racialized experiences of Spanish-speaking immigrants.  Of course, the use of creative, rasquache forms of humor have long been a hallmark aspect of Chicana/o humor. Yet listening to these digital literacies, especially within the contemporary “build the wall yet eat the taco” era, help make these accents legible. 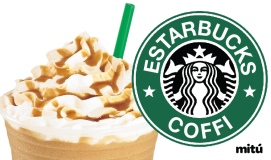 Certainly, some vocal accents are audibly more patent to select ears than others. Accents work to socially and geographically locate speakers; for instance, often racially indexing Spanish Accented English speakers as Mexican (regardless of nationality), immigrant (regardless of citizenship), and/or poor (regardless of occupation). Sociocultural linguists remind us that accents, word choice, vocal tone and other sound qualities of language are a part of a larger Bourdieu-ian rubric of linguistic capital.  Social psychologists consistently demonstrate that listeners make “moral, intellectual, and aesthetic judgments of others based on language use and accent alone.” For scholars of race and sound, accents comprise part of a sonic color line; a socially constructed aural boundary that aligns accented English speech as non-white and non-accented (or Midwestern) English as white.  Vocal neutrality, like whiteness itself, operates invisibly as privilege usually does.

Effectively “reading” a visual accent does not privilege a bilingual speaker but rather an accented listener, one raised or surrounded by immigrant speakers. The humorous phonetic play of a visual accent symbolically challenges the capitalist logic that a “neutral accent” or non-accent in English holds immense Western value.  For those of us with accented speakers in our families and communities, accents function as emotional markers; vocal or vernacular archives that trace an individual or family’s migration, travels and/or histories.  As Denice Forham shares poetically about her Puerto Rican mother’s accent, “even when her lips can barely stress themselves around English, her accent is a stubborn compass, always pointing her towards home.” For our families, accents evince the affective labor entailed in retraining tongues, in learning new idioms, and general struggles to converse in Inglish.

(when your grandmother wants to motivate you)

Using the name of a popular Mexican sweet bread (conchas) as a substitute for “conscious” upsets Western, phonetic understandings of “scious” in favor of a phonetic, Mexican stand-in. Concha, a sea shelled shaped sweet bread, associated with female genitalia and used in digital Latino communities has become a symbol for body positive inclusion; an insistence to not feel “self conchas” when eating (see Nalgona Positivity and SOMAR ATX). These memes privilege an accented listener, a feminist sensibility, as well as a panadería connoisseur.

The mega-for-profit-English-teaching-colonial organization, known as Teaching English as a Foreign Language (TEFL), explains that the lack of distinction in the Spanish language between a short and long vowel – for instance ship/sheep  – causes miscomprehension for assumed-yet-never-named native English listeners. Those learning English as a Second Language are encouraged to first reorient their own ears to listen to the subtlety between pull/pool before grasping the complexities of yacht/jot. The communicative burden lies on the accented speaker rather than the non-accented listener. The visual accent places the onus on the English-dominant listener, effectively excluding them.

Despite the fact that the United States represents the second largest Spanish-speaking country in the world, Spanish maintains a racialized, classed and “second-tiered” status within the United States imaginary (see Bonnie Urciuoli; Jane Hill; Jonathan Rosa; and D. Inés Casillas). These disparaging attitudes are evident when Spanish is prohibited in work places; when bilingual education and English Language Learner (ELL) programs are eliminated at ballot boxes; or when public school teachers are removed from posts based on their “heavy accents.” Institutional efforts to tame bilingual, accented tongues are less about speech and much more about accommodating the dominant, white listening ear.

According to Jennifer Stoever, the listening ear refers to dominant listening practices. Listening, she argues, is an embodied cultural practice that influences one’s position to power. “As the dominant ‘listening ear’ is disciplined to process white male ways of sounding as default—natural, normal, and desirable—alternate ways of listening and sounding are deemed aberrant and, depending upon the historical context, as excessively sensitive, strikingly deficient, or impossibly both.” Therefore the dominant listening ear not only tunes out “other” sounds but also treats them as illegitimate because they deviate from what sounds “normal” (read: white).

Gail Shuck found that white, native English-speaking college students construct an ideological distinction between Us and Them; gesturing to a sonic color line. Compellingly, she reported how American tourists in Mexico would describe native Spanish speakers as “heavily accented.” Yes. The communicative proficiency of Spanish by Mexicans in Mexico continued to be scrutinized by native English-language listeners.

Cinco de Mayo has versed us too well on the visual markers of racism like oversized sombreros, felt mustaches, and cheap beer pursuits, all a part of the commercial exploitation of Mexican communities in the U.S. But then phrases such as “Grassy Ass” or “No Problem-o” are heard bitterly as recurrent reminders that our language and accents are policed with the same fervor as our bodies. The inventive use of the visual accent archives how we listen, privileging the accented ear.  The loving jest that enwraps these digital literacies reminds us to never lose our accents.

Sara Veronica Hinojos is currently a Visiting Assistant Professor and Scholar with the Center for Mexican American Studies and Jack J. Valenti School of Communication at the University of Houston (2016-2018). She received her Ph.D. from the University of California, Santa Barbara in Chicana and Chicano Studies. Her research focuses on Chicana/o and Latina/o Media, the Politics of Language, and Humor.
.
Dolores Inés Casillas is associate professor in the Department of Chicana and Chicano Studies and a faculty affiliate of Film & Media Studies at the University of California, Santa Barbara. She writes and teaches courses on Latina/o sound practices, popular culture, and the politics of language.  Her book, Sounds of Belonging: U.S. Spanish-language Radio and Public Advocacy (2014) was published by New York University Press as part of their Critical Cultural Communication series.

Could I Be Chicana Without Carlos Santana?— Wanda Alarcon

6 responses to ““Don’t Be Self-Conchas”: Listening to Mexican Styled Phonetics in Popular Culture*”