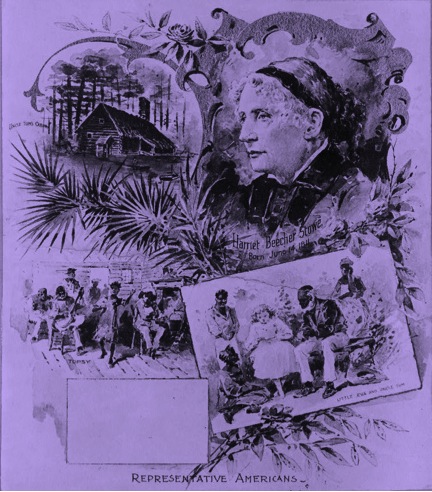 Editor’s Note: Sound Studies is often accused of being a presentist enterprise, too fascinated with digital technologies and altogether too wed to the history of sound recording. Sounding Out!‘s last forum of 2013, “Sound in the Nineteenth Century,” addresses this critique by showcasing the cutting edge work of three scholars whose diverse, interdisciplinary research is located soundly in the era just before the advent of sound recording: Mary Caton Lingold (Duke), Caitlin Marshall (Berkeley), and Daniel Cavicchi (Rhode Island School of Design). In examining nineteenth century America’s musical practices, listening habits, and auditory desires through SO!‘s digital platform, Lingold, Marshall, and Cavicchi perform the rare task of showcasing how history’s sonics had a striking resonance long past their contemporary vibrations while performing the power of the digital medium as a tool through which to, as Early Modern scholar Bruce R. Smith dubs it, “unair” past auditory phenomena –all the while sharing unique methodologies that neither rely on recording nor bemoan their lack. Last week, the series began with Mary Caton Lingold‘s exploration of the materialities of Solomon Northup’s fiddling as self-represented in 12 Years a Slave. This week, Caitlin Marshall treats us to a fascinating new take on Harriet Beecher Stowe’s listening practice and dubious rhetorical remixing of black sonic resistance with white conceptions of revolutionary independence.  —Jennifer Stoever-Ackerman, Editor-in-Chief

Harriet Beecher Stowe: novelist, anti-slavery agitator, antebellum DJ? In 1852, Stowe penned one of the most famous works of fiction in American history: Uncle Tom’s Cabin. A sentimental work, the novel dramatized the lives of fictional slaves searching for freedom. Eager to achieve a national hearing of her anti-slavery agenda, Stowe’s novel required a voice that could “speak” in morally efficacious tones against slavery.  To stage this voice, one that hinged on a sonic appeal to inter-racial sympathy, Stowe sampled and mixed two powerfully persuasive, if diametrically opposed, cultures of speaking and listening in the United States.

The first of these cultures revolved around revolutionary American understandings of political rhetoric. According to Jay Fliegelman, this tradition of republican oratory drew upon 18th century philosophical principles to recast Declaring Independence as a speech act. In his Declaration, Jefferson announced the ‘self-evidence’ of an American people by performing a nationally specific common sense in two important ways. First, he displayed a breed of American moral feeling in direct contrast to that of the colonial British; second, he did so through an oratorical style that inaugurated a common, American modality for articulating and hearing truth. The felt and sounded show of a common ‘self’ evidenced Americans’ natural rights to independence, and installed a markedly white revolutionary acoustics of freedom.

Stowe’s second sample was a misappropriation of a new mode of hearing in the 1845 Narrative of the Life of Frederick Douglass, An American Slave. As Sounding Out! Editor in Chief Jennifer Stoever-Ackerman has argued in “The Word and the Sound: Listening to the Sonic Colour-line in Frederick Douglass’s 1845 Narrative,” Douglass’s narrative was a direct attempt to bend and subvert what she terms “the sonic colour-line” (21). An acoustic schema that racialized sound and recruited the ear in black subjection, the sonic color line was epitomized by the republican oratorical tradition wherein meaning was linked to white articulation, and meaninglessness to black utterance, heard simply as ‘noise.’

Contrastingly, the reformed sonic model presented in the Narrative sought to position black sound as a site of meaning and resistance, and challenged Northern readers to question and remap both their hearing of such sounds and their ethical relationship to black meaning. Jonathan Cruz, in Culture on the Margins, terms this new mode of hearing “ethnosympathy” and defines it as an  “interpretive ethos of pathos” (3). Importantly, Stoever-Ackerman highlights that Douglass did not seek to cast black sound as “a sentimental appeal to truth,” but “rather [as] a challenge to dominant notions of truth produced and disseminated through the ear” (31). Stowe however, did not hear Douglass’s message so subtlety, and like many Abolitionists, was quick to commandeer black sound for a white social justice platform wherein it served as the innately moral (and romantically racialized) sound of sentimental suffering. Thus, it was this mishearing of the strains of black resistance that Stowe remixed with the white tones of revolutionary independence to spin a brand new soundtrack for the antebellum era. I term this soundtrack the acoustics of passing.

A vocal melodrama (a literal speech act) in black and white, the acoustics of passing was an amalgamated grid of sonic intelligibility invested in the political power of voice that encapsulated the seemingly antithetical (to white America) tones of republican virtue and black experience, and was deployed by Stowe to narrate the fantastical passage of African Americans from bondage to freedom. Composed first through Uncle Tom’s Cabin, and propagated later in her paternalistic relationships with black female artists, Stowe’s acoustics was ostensibly a powerful tool in the fight against slavery, but was ultimately used by the author to recapitulate her whitewashed vision of America.

Stowe’s acoustics appear in Uncle Tom’s Cabin in novel’s first passing scene:  George Harris’s Spanish masquerade. Stowe frames this scene prominently with the fugitive slave advertisement that George’s master, Mr. Harris, has posted. Many scholars have pointed to the way in which the visual organizes the practice of passing, but it is important to note that in this scene, the oral/aural is equally emphasized as key to a passing performance; Mr. Harris, for one, notes in his advertisement that George’s keen eloquence and literacy are the fugitive’s distinguishing features. Moreover, the advertisement seems to warn, in combination with George’s European complexion, he is rendered seemingly indistinguishable from a white man. Mr. Harris expects George to attempt such a passing ruse, and therefore clearly identifies the marks that will testify to George’s slave status.  George

is deeply scarred on his back and shoulders; has been branded in his right hand with the letter H (95).

Contrary to Mr. Harris’ predictions, however, George enters the roadhouse disguised as a Spanish gentleman. To pull off this guise George darkens his skin and hair. In the essay, “Spanish Masquerade and the Drama of Racial Identity in Uncle Tom’s Cabin,” Julia Stern argues that George’s third term identity, “nonblack, nonwhite,” is radical because it upsets the logic of the antebellum racial dichotomy. However, we should note that this dark masquerade allows Stowe to symbolically align George, a mixed race man, with both his black and white parentage. In darkening his skin George pays tribute to his slave mother, while by adopting a well-known Anglican slaveholding surname, Henry Butler, George references his absentee father. Thus, the Spanish disguise is Stowe’s reminder that George is passing for who he claims to be. 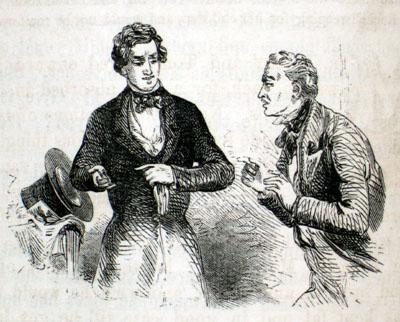 Yet before George can break from the tavern on his way towards Canada, he must reveal himself to his former employer, Mr. Wilson, who, George believes, has recognized him. In the long speech that follows, George must convince Mr. Wilson to discard a juridical sense of right in favor of an ethical one. Carefully arranged through Stowe’s acoustics of passing, George’s oratory presents equal parts white republican sentiment and black pathos, sentimentally persuading Wilson (and a listening America) of the moral justice in permitting him to pass to freedom.

Well aware that her readers at home would have been reciting the text of Uncle Tom’s Cabin aloud, Stowe is careful score George’s speech for both sonic whiteness and blackness–leaving intertextual clues that act like dynamic musical notation to indicate how George’s performance should sound. To begin, Stowe spells out her source material for George’s speech by directly citing Jefferson’s “Declaration” in a footnote to George’s opening salvo. Stowe wants readers to hear George’s speech as the realization of the American Republican promise. Americans, Stowe argues, are in a state no better than the British of the 1770’s: like the tyrannical father/monarch King George, Americans are “deaf to the voice of justice & of consanguinity.” A lengthy address, George’s monologue is an account of the domestic crimes of slavery, and, like the Declaration, is a complaint of personal injury at the hands of a nation that has been as negligent in looking after its blood kin as has George Harris’s father. Concluding with the passionate exclamation, “I’ll fight for my liberty to the last breath I breathe! You say your fathers did it; if it was right for them, it is right for me!” (102), George’s Declaration claims the rhetorical, and therefore natural, rights that are his white, paternal inheritance.

The sonic difference in George’s speech however, is the pathos of it, the “tears, and flashing eyes, and despairing gesture,” here meant to index the orator’s audible black suffering. Though setup as racially inscrutable in this scene, Stowe takes great pains to ‘out’ George’s hidden blackness.  Not only does Stowe symbolically darken George to cite his mother’s race, but she draws attention to the black body through repeated citation of his scars. This figuration of speaking wounds was prevalent in the popular imagination of Stowe’s day, and represented the white fantasy that black speech was the ‘playback’ of slave experience as recorded in the grooves of the traumatized and marked black body. Frederick Douglass, for example, recounts in My Bondage and My Freedom that he was first introduced as a speaker to the Abolitionist lecture circuit as a “graduate from the peculiar institution…with my diploma written on my back!” (359).

Miraculously, at the climax of George’s sonically mixed oration, Mr. Wilson is overcome with a revised sense of justice, one consonant with George’s bid for freedom. In this overdetermined acoustic schema, Stowe aligns progressive white ethos and republican sentiment with the distinct sounds of black pathos, and positions any mode of hearing contrary to this inter-racial sonic sympathy as un-Christian, un-patriotic, and detrimental to the future of the Union.

Yet Stowe’s acoustics of passing is decidedly supremacist. To begin, George’s mixed sound is haunted by the specter of forced conception and familial alienation ubiquitous to slavery. Additionally, while Stowe deploys the acoustics of passing towards an anti-slavery platform, her sonic schema ultimately preserves the social and political function of whiteness. Thus, while George’s sonic blackness is essential for playing out the moral justice of Stowe’s cause, it is this same audible blackness that permits Stowe to ultimately write the political problem of inter-racial integration off to Liberia with the entire Harris family.

Herein is the problem of Stowe’s acoustics: its sonic inter-racial sympathy at once promised speakers of color the agency of a sounded path to freedom (that which George performs and narrates) while ultimately deploying white practices of containment. And Stowe indeed dramaturged the lives of several mixed race artists through these acoustics, most notably the Dramatic Reader, Mary Elizabeth Webb and  the concert vocalist Elizabeth Taylor Greenfield. 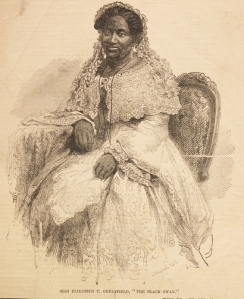 As I continue to investigate the careers of women of color like Greenfield and Webb, I think about how Stowe’s acoustics could have empowered and constrained their bids for resistance, rights and recognition.

Caitlin Marshall is a PhD Candidate in Performance Studies  at UC Berkeley. A vocalist herself, Caitlin applies her practice-based knowledge of voice towards the study of what it meant to ‘sound American’ during the nation’s first independent century. Focusing on ‘Othered’ American vernaculars at the intersections of race, disability, gender, and ethnicity, her dissertation, ‘Power in the Tongue’: Crippled Speech & Vocal Culture in Antebellum America, takes seriously the metaphor of voice in American democracy, and works at the confluence of Performance, Sound, and Disability Studies to mobilize speech impairment as a broad material and theoretical category for investigating how American citizenship was established as an exclusionary vocal limit in the antebellum era.

Hearing the Tenor of the Vendler/Dove Conversation: Race, Listening, and the “Noise” of Texts –Christina Sharpe