Cinco de Mayo. ‘Tis the season when many Americans don sombreros, order their frozen margaritas, and, God help us, speak “Spanish.”   We are well used to hyper Anglicized renditions of “amigo,” “adios,” and happy hour specials brought on by the commercialization of Cinco de Mayo.  The holiday celebrates a significant event in Mexico’s history – the battle of Puebla and victory over France in 1862 – through narrowing ideas about language, culture, and tequila. That said, let’s not just blame Cinco de Mayo for the disconcerting use of Spanish. Unfortunately, the incessant use of phrases such as “ay caramba” and “no problemo” are heard much, much earlier in contemporary children’s books.

The New York Times recently published the startling figure that just 93 of the 3,200 children’s books published in 2013 were about African American children. Within these few 93 texts, African American children all-too-often read about themselves within the past tense, in reference to slavery and civil rights legacies. Children of color are left to identify with the adventures and imaginative stories of white characters amid white settings.  Aptly characterized as an, “apartheid of children’s literature,” two moving first-person accounts from Walter Dean Myers and Christopher Myers detail the significance of incorporating more characters of color for all readers.  One major effect of this dearth of representation, according to Christopher Myers,

…is a gap in the much-written-about sense of self-love that comes from recognizing oneself in a text, from the understanding that your life and lives of people like you are worthy of being told, thought about, discussed and even celebrated.

Just as significant, is the number of children’s books about Latino children from the 2013’s trove of 3,200 books: 53. That’s 5-3. As a reminder, the United States Census tallied 53 million Latinos in the United States, representing the nation’s youngest demographic (children!).

However, perhaps worse than the actual lack is the rise of stereotypic in-your-face representations of race within children’s books – award-winning ones, actually – and their role in teaching children troubling ideas about race, language, and “difference.”

I fear not a single bandito. (clap-clap)

My manners are mellow,

I get the job done, yes indeed-o.

Case in point: Skippyjon Jones, a Siamese cat that pretends to be a Chihuahua superhero. Skippyjon speaks English, but his super hero alter ego speaks in Mock Spanish in his recurring and imaginative quests.  Speaking “Spanish” in hyperanglized fashion recasts Skippyjon from an English-speaking (white) cat to a Spanish-accented (brown) dog. His auditory performance of Mexicanness, what Reina Prado considers “sonic brownface,” reeks of white privilege as he code-switches from cat/white/English to dog/brown/”Spanish.” What’s worse, as a children’s book, directed at those between the impressionable ages of 4-8, Skippyjon encourages both adult readers and young readers to read out loud and perform sonic brownface. Listening to the book’s trite word choice (amigos, adios, frijoles), fake Spanish (indeed-o, mask-ito) and embellished accents (“ees” for is) trains the ear on how to speak “Mexican,” presumably, of course, for the listening amusement of non-Mexicans.

Apparently, these tried and true tactics sell quite well. This award-winning children’s book character, by Judy Schachner, has spawned into a lucrative empire that includes fourteen books, a coordinating plush toy figure, online webisodes of the books’ stories, CDs of Schachner reading out loud, the obligatory Ipad app, a starring role in the department store Kohl’s “We Care” charity campaign in 2012, and get this, a children’s musical. Of course, Skippyjon is not really recognized as a book series about Latinos (like fellow television darlings, Dora the Explorer, Handy Manny, or Dragon Tales) yet it taps into every flinching stereotype we know of, and should avoid, about Mexicans. Equating Mexicans and Mexican tales to the canine of a Chihuahua is hardly new but it does not make it less problematic.

For instance, in the inaugural self-titled Skippyjon Jones book, the cat’s adventures take place “far, far away in old Mexico.” Much like the perpetual placement of African Americans in the past tense within children’s books, situating Mexico in the imaginative past reinforces perceptions of all-things-Mexican as distant, foreign, and old.  Skippyjon and his chimichangos – his sidekicks (good guys) –set out to save their rice and beans from Alfredo Buzzito and Bumblebeeto Bandito (bad guys). Zorro-esque masks, swords, fiestas followed by siestas, fellow Chihuahuas, piñatas, plenty of cacti, and lots of clap-clap cues frame the rice-and-bean rescue. His adventures, book after book, via a Skippito brown identity sends a disquieting message about power and privilege. Skippito, even when masked, still plays the role of Great White Hero to the masses of “Mexican” dogs.

Then all of the Chimichangos went crazy loco.

Several of Schachner’s Skippyjon books have received notable accolades including, for instance, the 2004 E.B. White Read Aloud Award and a spot on the coveted “Teachers’ Top 100 Books for Children” by the National Education Association in 2007. The former comes with an adorning gold seal on future editions of honored books.  A sampling of the series’ laudatory press, from the E.B White Read Aloud press release, “Peppered with Spanish expressions and full of energized fun, SkippyJon Jones is not only entertaining for the listener, it’s also enjoyable for the reader.” And from the author’s webpage: “Each of my adventures are ay caramba, mucho fun but they’re educational too!” The insinuation that the Skippyjon Empire teaches Spanish not only ignores the richness of Spanish but it also feeds popular ideals that Spanish is an “easy” and “fun” language to learn.

Schachner’s recurrent use of “Spanish,” in particular, not only structures the silly narrative adventures of Skippyjon as he imagines himself to be Skippito but the racialized language play has also become the hallmark element of Skippyjon.  Written and read out loud by parents and teachers, some of Skippyjon’s signature phrases include “Holy Guacamole!” and “Holy Frijoles!” – textbook examples of Jane Hill’s renowned writings on Mock Spanish (or fake, incoherent Spanish uttered and deemed “funny” by non-native Spanish speakers).  Because we already hold native Spanish-speakers (U.S. Latinos) with such little regard in the first place, Mock Spanish done for laughs, as argued by Hill, comes quite easily. Carmen Martínez-Roldán takes the Skippyjon Jones series to task in necessary detail; see her analysis of Mock Spanish in the equally troubling, Skippyjon Jones  in the Doghouse.  Her emphasis on the cultural representations of Mexicans vis-a-vis language in children’s books supports my tirade against this cat/dog. Martínez-Roldán found that several teachers, particularly those from the Southwest, expressed a sense of inexplicable uneasiness to these books.  Amazon ratings are (painfully) positive for Skippyjon, yet, according to Martínez-Roldán, those who expressed low ratings were “accompanied by lengthy explanations, mostly related to misrepresentations of Mexicans and the poor use of Spanish.” Her research calls for more diversity within children’s literature but, central to this essay, reminds us that U.S. Latinos hold both a personal and political relationship to Spanish.

Anthropologist Bonnie Urciuoli explains how Spanish, when overheard in designated public spaces (think: Cinco de Mayo or Mexican restaurants) is safely “ethnified,” yet Spanish is regarded as out of place or “racialized” when heard as bilingual announcements at local grocery stores or school sites. When heard by monolingual English speakers outside of its designated spaces in the U.S.,  Spanish carries “racialized” connotations such as “impoliteness” and “danger.” The insistence many American employers place on speaking English and prohibiting non-English language conversations at workplaces, for instance, speaks to the public boundaries imposed on Spanish and Spanish-speakers. (Yes, Whole Foods. I am looking at you.)

Jane Hill’s provocative argument, built from Uricuolli’s writings, examines Whites’ use of Spanish (Mock Spanish). Unlike Latinos, who learn early on to self-monitor where and how they speak English and Spanish, non-native speakers of Spanish do not carry this same burden, according to Hill. In fact, they have the privilege of speaking grammatically incorrect Spanish, in hyper Anglicized Spanish, or mockingly (by adding a stupid “o” or prefacing a phrasing with “el”) without surveillance.

Then, using his very best Spanish accent, he said, “My ears are too beeg for my head.

My head ees too beeg for my body. I am not a Siamese cat… I AM A CHIHUAHUA!”

In addition to overplayed colloquial expressions, Schachner demarcates a racial line with “visual accents” (“beeg” for big) (see Jennifer Stoever-Ackerman, Priscilla Peña Ovalle and Sara V. Hinojos). In line with Uricuolli’s ideas, even Skippito’s English is accented and marked while in “Mexican” character. Readers stammer through “ees” and “beeg” in an effort, as prepped, to use their “very best Spanish accent.” The practice teaches children that accents are performative and easy to take on and off rather than hear accents as indicative of someone’s larger family histories of migration and culture. 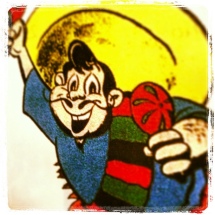 For children unfamiliar with Mexicans and Latinos, these books cast Spanish with archaic imageries of Mexican bandits and modern-day Frito Banditos. Spanish is not used as a language to communicate given its incoherence. Instead, Schachner uses Spanish to laugh at Skippito and by extension, Mexicans and Latinos in the U.S.; its runaway success is indicative of how “funny” Spanish and Mexicans continue to be to White and/or monolingual English speakers.

For Latinos, these books plant early attitudes about their own language differences. For children positioned as the family translator or struggling to maintain a bilingual, bicultural existence, these books teach children to shun their accent and those of their families. These books are clearly not for my two kids, whose young ears are already familiar with their grandmother’s Spanish-accented English and their own mother’s English-accented Spanish.

“Vamos, Skippito- or it is you the Bandito will eato!”

Reading children’s books out loud and listening to race through scripted accents sends troubling messages about “difference” at an early age. Educators have long argued that children’s books serve as both mirrors and maps to affirm and inspire readers’ identities, experiences, and future motivations. True. But I would also argue that the woeful absence of more diverse children’s tales mirrors a number of campaigns directed at working-class, communities of color; namely, our nation’s shaky commitment to universal preschool, lack of public support for Women Infant and Children (WIC) and Food Stamp programs, and outdated approaches to parental leaves (six measly weeks). In particular, Skippyjon Jones is a kid’s rendition of grownup racial and language politics, a pint-size version of NAFTA and English-only propositions presented for five-year old audiences. These policies, like the woeful crop of contemporary books, do little to provide a map for the livelihoods of children of color. Instead, Skippyjon’s use of language, a reincarnation of Speedy Gonzalez normalizes English, white characters (even in brown drag), and helps keep Cinco de Mayo antics alive. 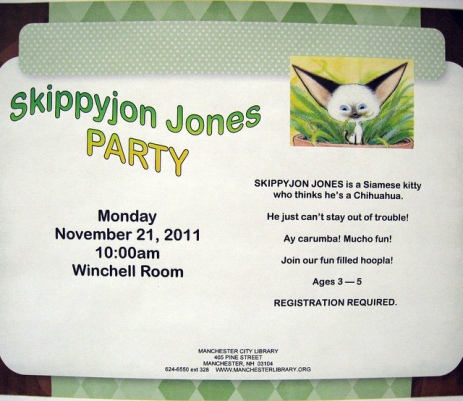 NOTE: On 5-8-14, the author added a passage to this article to reflect the relationship of her work to Carmen M. Martínez-Roldán’s “The Representation of Latinos and the Use of Spanish: A Critical Content Analysis of Skippyjon Jones” published in The Journal of Children’s Literature (2013).

Dolores Inés Casillas is an assistant professor in the Department of Chicana and Chicano Studies and a faculty affiliate of Film & Media Studies at the University of California, Santa Barbara. She writes and teaches courses on Latina/o sound practices, popular culture, and the politics of language.  Her book, Sounds of Belonging: U.S. Spanish-language Radio and Public Advocacy will be published this fall by New York University Press as part of their Critical Cultural Communication series.

This Is How You Listen: Reading Critically Junot Díaz’s Audiobook-Liana Silva

Sonic Brownface: Representations of Mexicanness in an Era of Discontent–reina alejandra prado saldivar