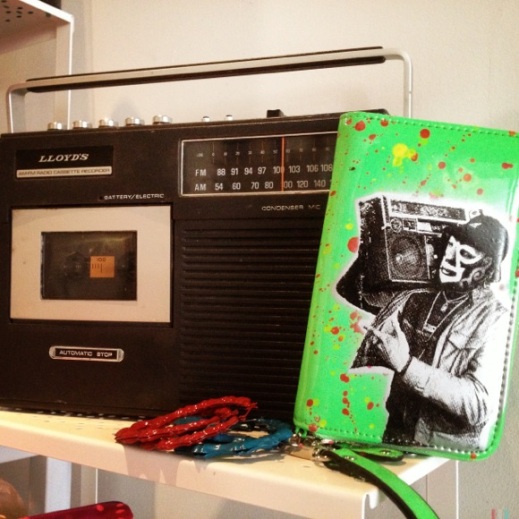 This is the third post in Sounding Out!’s 4th annual July forum on listening in observation of World Listening Day on July 18th, 2015.  World Listening Day is a time to think about the impacts we have on our auditory environments and, in turn, their effects on us.  For Sounding Out! World Listening Day necessitates discussions of the politics of listening and listening, and, as Inés Casillas prescribes, a wider understanding of the power and meaning of volume as material sensation as well as listening practice, particularly in communities marginalized by U.S. racial and ethnic hierarchies.  “Listening loudly in the face of anti-immigrant public sentiment,” Casillas tells us, “becomes a form of radical self-love, a sonic eff-you, and a means of taking up uninvited (white) space.”   –Editor-in-Chief JS

Chicana and Chicano friends across the southwest share different renditions of a similar childhood memory. The one where Mexican parents or grandparents crank up the rancheras -mournful, classic Mexican melodies – on an early Saturday morning or what seems to be an inappropriate, way-too-late weeknight. They reminisce about listening as children in wonderment to the familial, communal sing-along that seemed to instinctively take place among extended kin. That, or they tell of listening, cringing in silence, in fear that the non-Mexican neighbors will overhear the radio and spontaneous serenade; a telltale sign that their family is, indeed, Mexican. “As if,” shared Deborah Paredez in her account, “those few white neighbors somehow didn’t already know you were Mexican.” 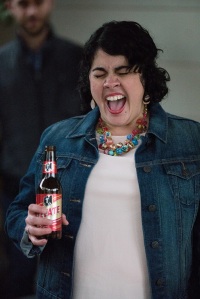 For unfamiliar ears, the sounds of Spanish, the mariachi ensemble, and/or accented karaoke all work together to signal brownness, working-class, and even, according to Jennifer Stoever, illegality. To me, the most provocative detail in these recurring childhood stories rests more on the volume, often stationed on one of two settings – “loud” or “real loud.” Excessive, “loud accouterments,” according to Deborah R. Vargas, are heard and identified as unforgiving, racialized and queer forms of surplus; what she calls “lo sucio” (a vernacular for dirty or grimy). The high volume allows Mexicans and Chicanas/os to publically flaunt their brown identities under the increasingly watchful gaze of a post-9/11 state, during a record-deportation Obama era, and when Latinos have officially outnumbered whites in the Golden (now brown) state of California. Listening loudly in the face of anti-immigrant public sentiment becomes a form of radical self-love, a sonic eff-you, and a means of taking up uninvited (white) space.

These stories, strikingly similar, often point to the ranchera song-style, specifically, the talents of Vicente Fernández and his regal voice as the beloved malefactor. The timbre in Fernández’s famed voice rouses (drunken) merriments of Mexico, with lyrical utterings about acrimonious, heteronormative loves and losses. The gritos or sentimental cries that accompany such songs are gendered, nostalgic stand-ins for an affect of displacement shared by both Mexican immigrants and Chicana/os. Simon O’Sullivan insists that, “you cannot read affects, you can only experience them.” I would add, “through sound” to stress the ways in which sound travels and emotionally anchor a listener’s body. The fact that so many Chicanas and Chicanos have these recollections and several (read: me) reproduce these loud practices with our own children says more about the continued racialized, brown experiences of Mexicans and Chicana/os in the U.S. than perhaps the prowess of rancheras themselves. 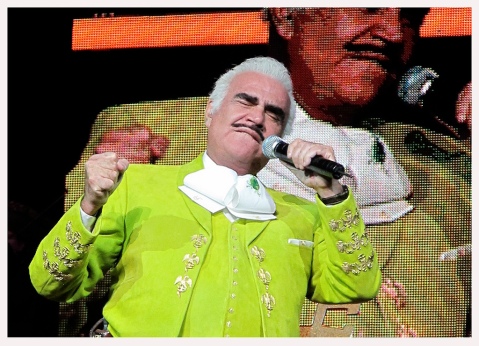 In many ways, the workings of race, language and labor resonate through radio. I argue that the very public nature of Spanish-language radio listening represents a communal, classed, and brown form of listening that differs markedly from “white collar” modes of listening, which offers more solitary practices, promoted by commuting in private cars and listening to personal satellite radios, iPods, or Internet broadcasts. 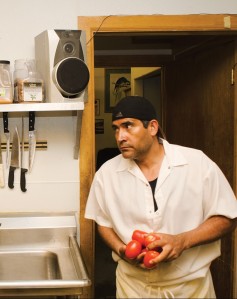 Workers listen to the radio in the kitchen of Taqueria El Nopal in Glenwood Springs, CO, Image by Andrew Cullen, High County News

For instance, one can routinely overhear loud Spanish-language broadcasts from the back kitchens of restaurants (regardless of the ethnic cuisine); outside bustling construction sites and Home Depot storefronts as day laborers await work; or from small radio sets balanced heroically on hotel housekeeping carts. On-air salutations heard throughout the day on Spanish-language radio are vocal nods to worksites as radio hosts greet washeros (car wash personnel), mecánicos (mechanics), fruteros and tamaleras (fruit and tamale street vendors), and those, presumably farmworkers, toiling under the sun. Despite the passivity in terms such as informal, invisible, and “under the table” to characterize a significant component of both U.S. and transnational economies, these recurrent and strong vocalizations of work and worksites makes audible the statistics of economist Lisa Catanzarite. She cites that recently immigrant Latino men constitute 40 to 71% of low-level service work such as “construction, agriculture, and manufacturing jobs, including waiters’ assistants, gardeners and groundskeepers, cooks, farm workers, and painters.” Not only do patrons and those passing by overhear radio at/near such worksites but radio also makes routine reference to labor and laborers. These “brown-collared” occupations coupled with the swift growth in Spanish and bilingual (Spanish-English) stations, have crafted a not-so-discrete, brown form of listening.

Arguably, it’s difficult to not hear the growth of Spanish-language radio as heavy metal, oldies, and jazz radio dials have surprised English-dominant listeners by switching to banda, norteños, and morning chatter in Spanish. In 1980 the Federal Communications Commission identified sixty-seven Spanish-oriented radio stations on the air. The 2010 figures list over 1300 radio stations broadcasting exclusively in Spanish. Proving all too well that those media pundits and scholars championing the digital era do not tune into broadcast Spanish-language radio. 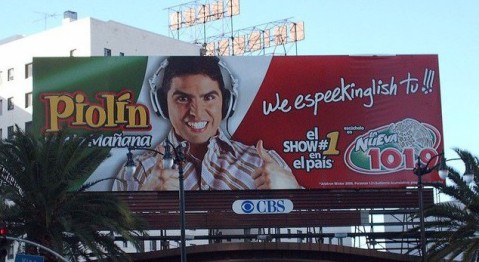 Spanish-language radio stations openly cater to a working-class and immigrant-minded listenership by advertising their call numbers and radio personalities at public transit stops. Latinos, loyal listeners of Spanish-language radio, are more likely to ride a bus or subway than to drive in a carpool lane to get to work. As an acoustic ally, these broadcasts not only assume listeners are a mix of undocumented persons, legal residents, and from mixed-status families, but radio hosts and radio programs openly rally in solidarity of their listeners’ civil rights, a provocative feat, given the recurrent changes in immigration politics. In fact, promotional billboards for radio stations often double as political statements. This one, for instance, featured Univisión’s then top rated morning host. The slogan symbolically pokes fun at unfriendly English-only attitudes and keenly reminds drivers that the United States is the second largest Spanish-speaking country in the world. 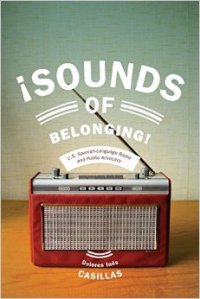 The portable and inexpensive cost of radio sets makes it possible for Latinos to tug their sets to work with them. Indeed, a recent listening report verified that the average Hispanic radio listener makes less than $35,000 a year and tunes in as early as 4am; indicative of graveyard, swing shifts and/or early treks to work. Closely aligned with my own assumptions about listening, Jose Anguiano’s doctoral study includes an insightful chapter on the listening preferences of custodial workers during late night shifts; in particular, how workers decided on where to place radio sets to optimize the acoustic sound of empty building spaces.

Yet, a troubling National Public Radio (NPR) segment devoted to the difficulty of finding a simple radio set bared the distinct classed uses of radio and radio listening. Producers visited high-end specialty stores in search of an AM/FM radio. The program broadcasted their collective laments at finding one radio set at their fifth store. Of course, their pursuit would have ended much earlier if they had visited a local swap meet, a K-Mart, or asked any of said laborers above where they had purchased their radio set. During my own research for Sounds of Belonging, twenty-seven of the thirty-three immigrant focus group participants interviewed indicated that a radio set was their first media purchase in the U.S. 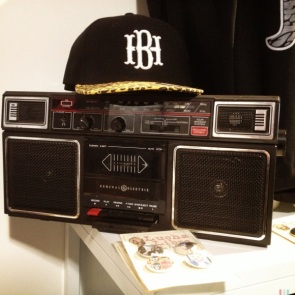 Inside Espacio 1839 in Boyle Heights, California, retail and performance space and home of RADIO SOMBRA, a 24/7 community-based Internet radio station, Espacio is located at 1839 E. 1st Street and is open Wed-Sun, 12-8 pm.  Image by Oliver Wang for KCET Artbound

Of course, such lucrative opportunities to woo radio listeners are not lost on corporate media. Latino listeners (whether they identify as Spanish-dominant or not) tune in to radio an average of three hours a week more than the “general” (white) U.S. radio listener, with an impressive 13.5 percent of all U.S. radio now broadcasting in Spanish. Univisión, a name long associated with Spanish-language television, now reigns as the empire of radio, owning the most Spanish-language radio stations in the United States.

Although tabulated figures showcase the popularity of left-leaning political broadcasts on Spanish-language commercial radio, Mari Castañeda and Monica de la Torre remind us of the significance and efficacy of community-based, Low Power FM radio for rural, Spanish-dominant Latino communities. Without the privilege of corporate sponsors such as  McDonalds, or Kohls, small and fiercely independent, community-based bilingual and Spanish-language radio still thrives in farmlands across the U.S.

Sound, especially at high volume, daringly seeps and trespasses across public, racial boundaries. The policing of sound, according to Derek Vaillant, beginning in the nineteenth century were orchestrated civic attempts to eliminate unsightly and “noisy” cries from poor, ethnic immigrant street vendors peddling their goods. Another instance, during World War II, foreign language broadcasts were outlawed out of monolingual American fears that enemies were communicating via radio. City transits often post rules asking that passengers use audio/video equipment only with headphones. Public etiquette about appropriate levels of volume enforced through noise ordinances and ways of listening (privately) speak to larger issues about race, labor, and class. Not only do these public campaigns and transit rules privilege the dominant, western ear but it also, according to Jennifer Stoever, focuses on white sensory orientations of noise which inherently positions those most marginalized as the “noise makers.” 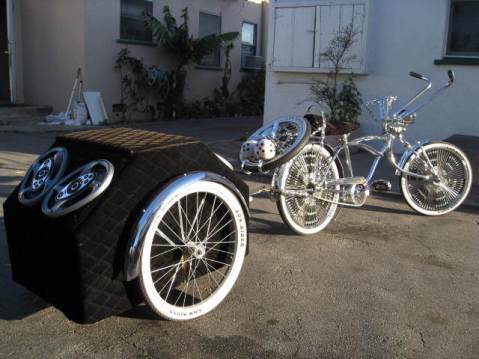 For generations, Chicana/o and Mexican listeners have gravitated to radio for far more than the musical sounds of homelands imagined or left behind. Raising the volume on Spanish-language radio sends neighbors a racialized sign of “Mexican-ness” often heard as unruly, “noisy,” and perhaps worse, unassimilated. High volume from the private spaces of homes and cars disrupts the quiet, public acceptance of ear buds while also providing sheer, public glee. An audible, unabashed reminder of other forms of “lo sucio” – high credit card debt, more than 2.2 children, vegetable gardens in front yards, too-much-cologne or Virgin de Guadalupe adornments – and the brown refusal to tone, much less, to turn it down.

*Inspired by my six year old’s attempts to grito along with “Volver, Volver.”

Dolores Inés Casillas is an associate professor in the Department of Chicana and Chicano Studies and a faculty affiliate of Film & Media Studies at the University of California, Santa Barbara. She writes and teaches courses on Latina/o sound practices, popular culture, and the politics of language.  Her book, Sounds of Belonging: U.S. Spanish-language Radio and Public Advocacy, was published in Fall 2014 by New York University Press as part of their Critical Cultural Communication series.

“Sonic Brownface: Representations of Mexicanness in an Era of Discontent“–reina alejandra prado saldivar