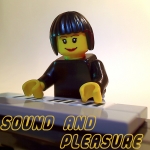 After a rockin’ (and seriously informative) series of podcasts from Leonard J. Paul–a three part “Inside the Game Sound Designer’s Studio”– our summer Sound and Pleasure series keeps giving you the good stuff, this week with SO! Regular Regina Bradley, making it rain. . . with some serious knowledge. What is the connection between sound and enjoyment, and how might black women’s sexual freedom be manifested via sound? –-JS, Editor-in-Chief

At fifteen, while in church service, I learned how to clutch pearls after hearing a woman moan during the altar call.

It was not a “Jesus done found and saved me” moan, either. A friend forgot to turn his cell phone off for church. As the church prayed, his phone started to ring. It was not the usual digital beeping or quick calypso ring tone. His phone calls were annotated by a woman’s moan during sex. She moaned from his cell phone to pick up the call. Each ring the woman moaned louder and adamant until she hollered like she was just saved. The kids in the back snickered as the ushers – including my grandmother – silently and angrily screened each pew to see who would pick up the phone. Quaking church ladies and my grandmother’s wide-eyed glare and heaving chest suggested they were about to pass out from embarrassment. Wringing their white gloved hands and grabbing at their pearl necklaces in angst, they looked everywhere but at each other: the back of a man’s head, the cross at the front of the church, the stain glass windows. A flush of warmth entered my cheeks and neck as I tried to contain my laughter and creeping embarrassment. I was embarrassed for my grandmother and the ladies of the church because I was aware of the unspoken rule that women – especially middle-class black women – don’t do sex. Being embarrassed of sex is proper and “ladylike.”

Ashon Crawley’s contextualization of the praise and worship in Black Pentecostal church as a sonic public zone is useful for using sound to complicate the church as an erotic space. Crawley’s suggestion of sound as a “vessel. . .for the exchange of ecstasy and ecstatics” collapses the more tangible notions of gender and respectability via physical displays –i.e. the quaking church ladies and clutching pearls – to recognize the overlap of moaning as a marker of sexual joy, moaning as a form of praise and worship, and moaning as an indicator of shame. Crawley’s observations bring to mind Helga Crane’s run in with the storefront church in Nella Larsen’s Quicksand. It is not the physical aspect of the church and its embodiment of respectability that draws Helga into the space. Rather, it is the singing, weeping, and moaning – the sonic elements of praise and worship–that parallel her own suppressed sexual frustrations. Her weeping is not necessarily a “come to Jesus moment” but rather a sonic release acknowledging her sexual agency.

Looking back at when this dude’s phone went off in church, I realize the bulk of discomfort in acknowledging sexual pleasure exists in how it sounds. The woman’s moan highlighted an alarming reality for the women at my church: pleasure was being presented outside of its respectable physical and sonic boundaries. I wish to identify what I call sonic pleasure politics to address new developments in 21st century southern gender identity politics. Sonic manifestations of pleasure point to a younger generation’s rearticulation of sexuality as a site of agency and self-definition in an otherwise suppressed southern experience.

As a southern black woman, I’ve always been struck by the anxiety sex and pleasure invoked in the women in my life. Sex and pleasure were never articulated in the same breath, as sex was a wifely duty and responsibility for procreation. Pleasure was never synonymous with sexual joy, even when I snatched whispers of conversation about sex from my elders. Moreover, I was taught that sex (or even an interest in it) would plummet my stock as a good girl and put me in the ranks of “fast-tailed” girls who used sex as a desperate plea for attention. Nope, sex – pleasurable sex – was always for men’s gratification. Aside from the abstinence manifesto – “just don’t do it, chile” – for women, enjoying sex was the devil’s work. Respectable sex was quiet, for marriage, and never discussed outside of the house.

Sound as a signifier of sexual pleasure is considered by many to be counterintuitive because of the history of sexual trauma associated with black women’s bodies in the south. Reading sex as a genesis point of southern black women’s pleasure and empowerment is a difficult undertaking. The forced silence of slave women’s rapes and other physical violence that took place on southern soil parallels the silence that is deemed to be necessary for survival in a racist society. Further, the far-reaching residual effects of black women’s inferred lacking virtue lurk in how black folks navigate their southern experience and identities. Conservative attitudes towards sex in the southern black community are no doubt associated with the constructed attempts to humanize and validate blacks outside of hypersexual scripted blackness.

However, the sonic dimension of sex and pleasure in the south goes largely without analysis even though sound is a primary space in which recognition of sexual and nonsexual pleasure takes place. Consider blues women and, more recently, women in [southern] hip hop culture. The sounds of women’s giggles and moans as representative of sexual pleasure in bass music and the heavy use of moaning in the work of Trina, Jacki-O, Khia, Erykah Badu, Beyoncé, and Missy Elliott points to a need to recognize sound as a reservoir of pleasure, raunchiness, and sexual work—what I call “sonic pleasure politics.”

Studies of sonic pleasure including those of Robin James contextualize pleasure via the technical production of sound to induce a particular set of cultural and visceral responses. However, I ground my theorization of sonic pleasure politics in the growing body of scholarship offered by the “Pleasure Ninjas” collective consisting of Joan Morgan, Brittney Cooper, Treva Lindsey, Kaila Story, Yaba Blay, and Esther Armah. They utilize pleasure as a site of healing and reclamation of black women’s identities. Morgan’s interrogation of pleasure as a form of survival, for example, is especially useful in thinking about how southern women’s sexuality stems from the trauma of the transatlantic slave trade. She suggests pleasure’s palpability as an alternative space to reclaim slaves’ humanity. The Pleasure Ninjas’ construction of pleasure lends credence to my theorization sonic pleasure politics as a space for mediating the historical implications of abusive sexual power and the use of sexual pleasure as a form of resistance in the south.

Strip club anthems, like Memphis rapper Juicy J’s “Bandz a Make Her Dance,” riff on the sonic and physical components of strip club culture. The bass kicks complement what sounds like clapping hands, a signifier of strippers’ clapping butts. Juicy J talks at length about his love of the strip club, distinguishing between “real” and fake strip clubs by the amount of nakedness and strippers wrangling for high-paying patrons’ bands of money. The snapping sound of rubber bands holding wads of cash together authenticates the duality of the women’s sexual posturing as physically pleasurable for men and profitable – economically pleasurable – for women. “Bandz a Make Her Dance” is grounded in the appeal of strip clubs as spaces of empowerment for black men. From this perspective, the clapping heard across the track could also signify the snapping of rubber bands against money to sonically signify men’s power as a strip club patron. Yet the physical and sonic presence of black women’s bodies – i.e. grunting as they maneuver and climb the dancing pole – also makes strip club culture a useful space to pivot southernness and sonic pleasure.

An example of establishing black women’s sonic pleasure narratives in strip clubs is singer Rihanna’s panning of “Bandz a Make Her Dance” titled “Pour It Up.” Although Rihanna is a pop singer from the “Global” South, she sonically signifies if not subverts southern hip hop gender politics via sampling the instrumental from Juicy J’s record. The majority of “Pour It Up’s” instrumental accompaniment is a subdued if not washed out sample of “Bandz a Maker Dance” that helps highlight Rihanna’s voice. The clarity of Rihanna’s voice “garbles” the accompaniment in the sense it is background noise to her narrative of enjoying herself and taking pleasure in the bodies of other women present in the club. The accompaniment serves as a brief nod to Juicy J’s initial intentions of crafting the strip club as a sexual space but ultimately uses the track as a testament to her own pleasure narrative.

In particular, Rihanna’s sing-song holler before the chorus “All I see is signs…all I see is dollar signs,” points to a subversion of the hypermasculinity in strip club culture to establish her own pleasure in a similar space. Parallel to Juicy J’s indulging of exotic dancers via throwing bands of money, Rihanna enjoys herself at the strip club using other people’s money:

Patron shots can I get a refill (Still got mo’ money)

Strippers going up and down that pole (Still got mo’ money)

Bands make your girl go down (Still got mo’ money)

Lot more where that came from (Still got mo’ money) 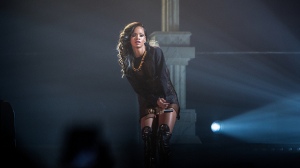 In particular, Rihanna’s verse not only demonstrates an alternative viewpoint of black women’s bodies in the strip club but destabilizes the idea of the strip club – and intercedes on the understanding of southern hip hop – as a heternormative hypermasculine space. The line “bands make your girl go down” alludes to not only a possible sexual encounter by Rihanna or for the girl in question but doubly signifies upon the potential for pleasure via the strip club culture for women and the hypersexuality of Juicy J’s track. “Pour it Up” reflects the messiness of [southern] hip hop gender politics because it builds upon the reputation of the strip club as a site for men’s pleasure to excavate women’s dancing as pleasurable for their own purposes. In addition to Rihanna’s sonic signifying of strip club culture, the “Pour It Up” reveres pole dancing as an art form rather than an exploitative practice. Rihanna’s pleasure in watching the dancers perform parallels the exertion of joy – and consent – that the dancers exhibit in their movement.

Trekking back to the sexy moaning phone in church, the sonic cue of sexual pleasure and joy conflicted with the gender norms associated with southern black women’s identities. Consideration of sonic pleasure narratives stirs discussion of the unarticulated experiences of southern black womanhood that may be overlooked in favor or a larger, more conservative, and familiar narrative of sex as tool of victimization. Sonic pleasure politics makes room to remap the contemporary southern social-cultural landscape as a complex yet living space of cultural production and sexual freedom.

I Like the Way You Rhyme, Boy: Hip Hop Sensibility and Racial Trauma in Django Unchained – Regina Bradley