Radio Ambulante: A Radio that Listens 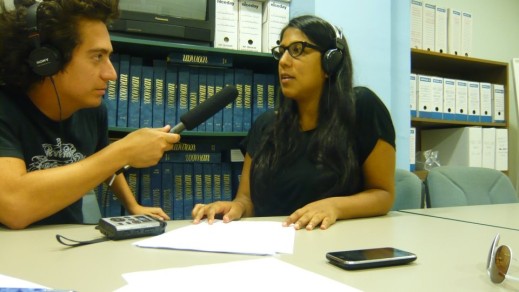 Welcome back to the final article in our three-part series, Radio de Acción. Special thanks to you, our readers, and to editors Jennifer Stoever and Neil Verma at Sounding Out! for hosting this addition to a burgeoning field of Latin American critics and producers who are changing the way we hear radio as history, as theory, and in practice.

Over the past several weeks we have tried to bring you into the multiple worlds made possible by radio in Latin America. If you missed our previous posts, please find Alejandra Bronfman’s stunning history of radio in the Caribbean here, and Karl Swinehart’s fascinating study of Aymaran-Spanish radio here.

Both of these critical approaches set the stage for Carolina Guerrero’s extraordinary work with radio in the Americas. An executive director and co-founder of Radio Ambulante—a program that fellow co-founder and novelist Daniel Alarcón calls “This American Life, but in Spanish, and transnational”—Guerrero’s post takes us behind the scenes of her show to consider how the sounds on radio come to life for us as listeners, and the significance of hearing someone’s words in her or his own voice and language. For more Radio Ambulante after you finish reading and listening to Carolina’s post, please visit their website and download their podcasts.

In late 2007, novelist Daniel Alarcón was hired by the BBC to produce a radio documentary about Andean migration in his native Peru. He spent 10 days traveling around the country, from the highlands to Lima, conducting interviews in both English and Spanish, talking to a wide range of people with very personal stories about migration. But when Daniel received the final mix from London, he was disappointed to find that the editor had privileged the English language voices, and left out many of the most compelling Spanish language storytellers. Daniel was left with a question: what if there was a space for those voices on the radio waves? What would it sound like?

Over coffee in San Francisco in January 2011, Alarcón and I decided to create that space, inspired by US public radio shows like This American Life and Radiolab, which had no Spanish counterpart. We knew that poignant, fun, surprising, unique, sometimes sordid, sometimes romantic, absurd and incredible stories we often heard in Latin America were out there, just waiting to be reported. We knew that they would make great radio. And we knew there was an audience—in Latin America and the US—that wanted to hear it. The result became Radio Ambulante. 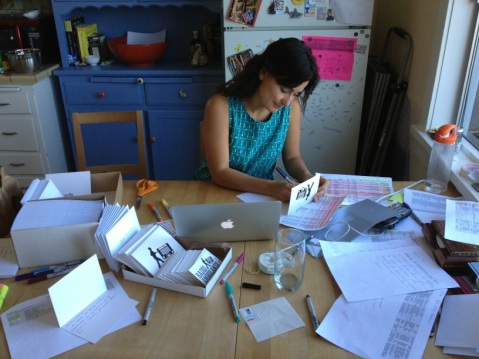 We began by asking many of our print journalist friends in Latin America to share stories with us. We sent them links to stories from some of our favorite American radio programs, and then contacted a few bilingual independent radio producers here in the US, and asked them for advice on the basics of radio production. Many directed us to Transom.org, which was an absolutely essential resource.

In March of 2012, we launched a Kickstarter campaign. All we had was an idea and a sampler with less than 45 minutes of audio—and still, we managed to raise $46,000 with the support of 600 backers. The success of this campaign was a huge confidence boost, and we knew we were on to something. We used this money to produce our pilot season.

Since then, we’ve worked with more than twenty different producers in more than a dozen countries. These are the characters that emerge from Radio Ambulante stories: a transgender Nicaraguan woman living with her Mexican wife in San Francisco’s Mission District; a Peruvian stowaway telling his harrowing tale of coming to New York in 1959, hidden in the hold of a tanker ship; the Chilean soccer player who dared challenge the authority of General Pinochet; a young Argentine immigrant to North Carolina, trying to find his way through the racially charged environment of an American high school. Taken together these voices create a nuanced portrait of Latino and Latin American life:

PERSONAL STORIES FOR ALL EARS

Now in our third season, we’ve been working hard to create a group of trusted producers and editors across Latin America; people we can turn to with an idea, people we know we can trust with our limited time and resources; reporters we can send to Cuba, send to Honduras, send to Venezuela, and be certain they’ll come back with usable tape, and a good story. We want these first time producers to become long-term contributors.

That’s the case of Camila Segura, Radio Ambulante’s current Senior Editor. She had no prior experience as a radio producer when she reported her first story for us in 2012. That piece, El otro, el mismo (The Other, The Same) is about two men, one Colombian, one Argentinian, who not only share the same name, but who look almost identical. From this coincidence, the story becomes something much stranger, funnier, more subtle, and ultimately quite moving:

We want the listener to be able to relate and identify with the characters, to feel what they feel. A good Radio Ambulante story should be universal and shouldn’t have an expiration date.

One story from our first season captures this universal quality. In 2011, River Plate, one of the most famous soccer clubs in South America, was relegated to the Argentine Second Division. This event shook the entire nation, and anyone who listens to this story could relate to the sadness and pain that the protagonist is feeling. Two years later, the story still has that raw power: 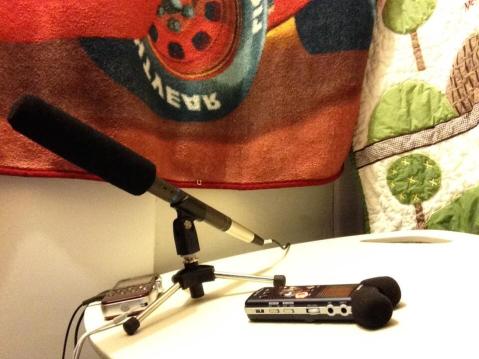 Martina Castro, Senior Producer, has designed most of Radio Ambulante’s sound, finding the balance between music and sound effects in order to support the voice of the main characters. As she explains,

There are many kinds of pieces that make it to Radio Ambulante. Sometimes the story is focused on one person and their experience: something that happened long ago. Like with Mayer Olórtegui in Polizones (The Stowaways), and the story of how he and his friend Mario jumped aboard a ship headed to the United States. There is no substitute for a dynamic storyteller like Mayer. He not only recreates moments, sometimes even imitating the sounds of what he heard, but he remembers the emotion of what happened, and really feels deeply what he is talking about, like when his voice breaks up at the mention of saying goodbye to his friend Mario.

Other, more symphonic, multi-voiced pieces provide a different kind of production challenge. The script must showcase the many characters, while giving the listener enough grounding so as not to get lost. A particularly successful example is our award-winning piece “N.N.”, about Puerto Berrio, Colombia, by reporter Nadja Drost. Nadja gathered recordings of this river town, and conducted interviews with many locals, always focused on the issue of the floating, anonymous dead and the town’s strange relationship with these bodies. The music in a piece like this is only meant to support those real-life sounds and characters, and a repeated melody serves as a ghost-like echo of the dead, those voices we never hear.

We use music carefully to shift the mood, to mark the end of a section, and to alert the listener that something new is coming. The music is also meant to break up chapters of a story, give us a moment to reflect on what we just heard, or to indicate when something is about to change. There are examples in Yuri Herrera’s “Postcard from Juárez,” produced by Daniel Alarcón. It tells the story of Diana la Cazadora, or Diana the Hunter, a vigilante who set about killing bus drivers in one of the world’s most violent cities, allegedly as revenge for years of misogyny and sexism.

In this particular story, we were able to do something that the English version (produced for This American Life) could not: read in the original Spanish the letter that the supposed killer sent the local Ciudad Juárez newspaper explaining her actions. We had this read by Lizzy Cantú, a Mexican journalist who’d worked with us before, and then distorted her voice, to give it that dark ambience. The listener is supposed to feel the grim violence in those words: the desperation. 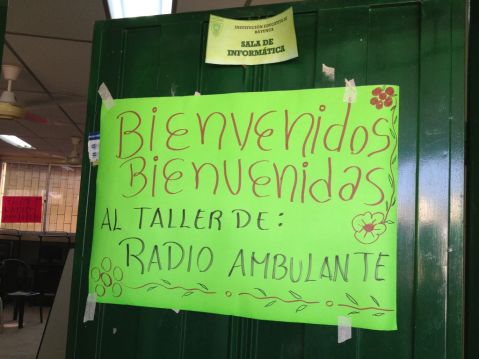 THE STORY IS KEY

In three seasons producing the show, we’ve learned that the craft of radio comes from listening, and that the most challenging aspect of producing radio is not in the technical details of recording those voices or sounds, but in the story itself.

The most basic building block of a good radio story is a good interview. The technical aspects of gathering sound are less important than phrasing the questions to get vivid, almost filmic answers, full of details that set the scene.. As Executive Producer Daniel Alarcón explains,

We ask our reporters to push interviewees to describe scenes in great detail, to unpack moments. Our interviews can last two hours or more, and many are surprised that we go so in depth. We like our reporters to circle back, and then circle back again, so that we’re sure we’re getting the most vivid version possible of a given story’s crucial moments.

We ask our reporters to write colloquially, to imagine they’re telling the story to a friend at a bar. It’s important to have immediacy in the language, an expressive tone that can seem almost improvised, even when it isn’t. The emotional impact of radio is that it feels as though a secret is being shared. The script and the production should always be in service of this intimacy.

Before a script is final, it’s shared with other editors on the team around the globe (California, Colombia, Puerto Rico, Chile), mixed, edited, soundtracked, and refined through hours of collective work online. 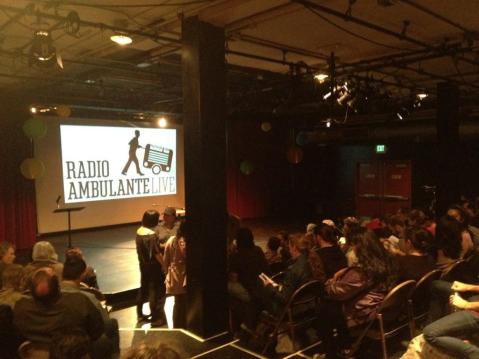 While creating our own sound and storytelling style, Radio Ambulante is constantly experiment with different formats and looking for new ways to interact with our listeners. We’ve done three live radio shows, in Los Angeles, San Francisco, and New York. In addition, we’ve produced two English Language specials, and partnered with writers and animators on hybrid multimedia storytelling. With our partners at PRI, we’re developing a new interview series, and are working with Latin American universities and media outlets to teach more journalists to use radio. Our hope is that Radio Ambulante’s success will mean more innovative radio work in Spanish, and more experiments in the possibilities of bilingual radio.

Carolina Guerrero is the Executive Director of Radio Ambulante. Before getting into journalism, she was a promoter for cultural and social projects, creating a bridge between organizations in three different continents. She has worked with public and private institutions in several countries, for which she has designed and overseen festivals, art exhibits, teaching workshops and fundraising events. Carolina is a John S. Knight Journalism Fellow at Stanford University 2014-15. She is the proud mother of León and Eliseo. (@nuncaduermo)

“We wanted to tell stories about sound: Opening Ears Through the Everything Sounds Podcast”-Craig Shank