Something’s Got a Hold on Me: ‘Lingering Whispers’ of the Atlantic Slave Trade in Ghana 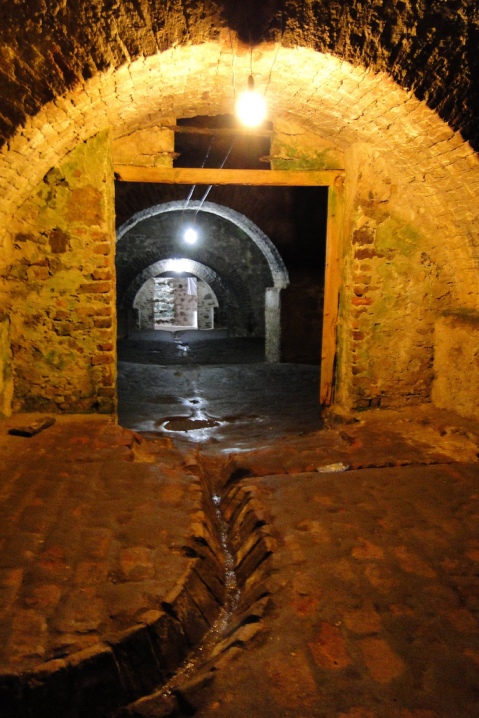 I am standing in the mouth of the female dungeon. I hesitate to breathe for fear the hole will swallow me. It is competing with a rising tide of anguish that also threatens to eat me alive. The hole is dark, dank and noisome yet oddly comforting. After all, this is why I, and others, come to this site of torture—to fill in the gaps of our history, to make better sense of our lives, to find some comfort. But how does one find home in throbbing loss? Why must one dig for answers—that, ultimately, produce new questions—within the locus of pain? I run my fingers across the length of the thick, cavernous rock. It is brown like my skin…I can’t tell where it ends or begins.

In a 2010 interview with FADER Magazine, poet Gil Scott-Heron declared, “The spirit should be material. It’s your blood. Inside your bloodstream is your parents and their parents and their parents and their parents and they want you to make it, because when you do what you do and you’re successful, then they’re happy you made it. You’re the link with immortality” (88).  What Scott-Heron articulates here is an ontological claim to spirit as inherently material and always already an eternal force over life’s struggles. The answers to the puzzle are embedded underneath the skin in an internal dialogue between spirit, mind, blood, bone and mass. This same ideological force is what pulls so many African American tourists back to Elmina and Cape Coast Castles in Ghana, in search of what Anne Bailey calls “lingering whispers” in African Voices of the Atlantic Slave Trade (3).  We spin back the wheel of time to re-trace its deep grooves and recover the loss/lost in dungeons, burial sites, Donkor Nsuo (The Slave River), and the Atlantic Ocean.

Perhaps one’s DNA is a recording that is not only biological and racial but cultural and cosmological.  Carolyn Cooper, in Noises In the Blood: Orality, Gender, and the “Vulgar” Body of Jamaican Popular Culture discusses “noises in the blood and reverberating echoes in the bone” as genealogical discourses of race.  Can one’s DNA be an embedded and embodied soundtrack that charts particular and interconnecting nodes of history? Are those memories, experiences, dreams and longings then “recorded on my body,” as Nancy Frey suggests in “Stories of the Return: Pilgrimage and Its Aftermaths” (101) ?   If we broke down the strands into coherent codes, or notes, or rearranged them into other combinations, what would they sound like? Would it produce a series of mixtapes, like hip hop records that sample older Black music—blues, R&B, funk, soul and jazz—and re-articulate them with new and emerging sounds? Perhaps it’s like Nathaniel Mackey muses in Bedouin Hornbook, “The last thing I remember is coming to the realization that what I was playing already existed on a record” (5).  The slave forts become the ontological point of racial and cultural identity because, according to Saidiya Hartman’s Lose Your Mother: A Journey Along the Atlantic Slave Route,  “the dungeon was a womb in which the slave was born” and where, by the performance of walking through the “Door of Return” one’s social life can be recovered, revitalized or remade (111).

I strain to hear any forms of life. As Slavoj Žižek suggests in “‘I Hear You With My Eyes’; or, The Invisible Master,” “ultimately we hear things because we cannot see everything” (90 and 92).  According to tour guides at Elmina and Cape Coast Castles, the brick slave pens reverberate with the loss/lost of life, particularly at night, where bodiless moans, sobbing, screams and litanies can be heard rocking through the forts. But I can only detect distant sounds of activity beyond the back of the castle doors and “The Door of No Return.” The predominant noise is the Atlantic Ocean, crashing against the seashore. I hear the fishermen speak in rapid, hushed tones as their bodies struggle against the tiny canoes, their oars pulse against the waves as nets are thrown in with great precision. At the entrance of the castle, teenaged boys patronize African American tourists with “Sister! Brother!,” “Akwaaba”(Welcome), or “Welcome Home” as they pass folded letters with requests for contact information, money, or school donations, colorfully braided bracelets or other trinkets for sale.  Market women pierce the air with unique calls for customers to try their products of bagged ice water, oranges, sugarcane, pineapple, and groundnuts. Cab drivers compete for tourists’ attention with loud, intermittent honks, verbal petitions or hisses. 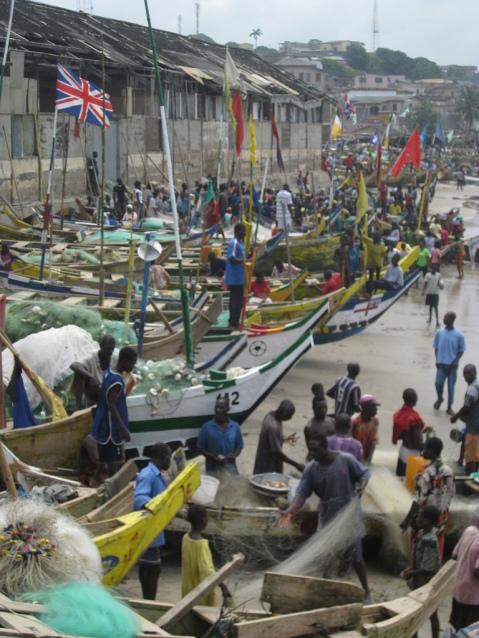 The shops in the courtyard just beyond the reception area are now filled with traditional instruments—drums, guitars, piano boxes, and rattles—beads, cloth, masks, paintings, rugs and postcards. It is no longer a market in Black flesh but of “African” objects, or cultural artifacts that amplify the racial identity of diasporic visitors, and make them more “real” once they return home. Shop owners busy themselves making crafts, passing the day chatting with one another and potential customers.

This cell in which I stand is one of many at the Twin Castles, the gargantuan fortresses that after five hundred years continue to hold fast to the southern coast of Ghana. The intersecting trails of fine cracks rupture the once-pristine white paint on the walls. . .possibly one for every person stolen out of the dungeons. The hull is transfixing, the hold captivating. For some reason, I am suddenly reminded of Rev. James Cleveland’s gospel song, “Something’s Got A Hold On Me” where he proclaims, “Something hit me/Up over my head/And run right to my feet.”

Cleveland is talking about the power of the Holy Ghost to re-fashion his troubled life through spiritual re-birth. He sings of transformation from a life of misery to a brand new liberation that is manifested like a shock through his entire being and body. This new shock counters the crisis he regularly experiences “in the world.” This new bodily sensation permeates his entire being and acts as a shield against daily strife. Similarly, Etta James’ secular version, “Something’s Got A Hold On Me” attests, “My heart feels heavy/my feet feel light/I shake all over/ but I feel alright.”

James’ something is more possessive of her person; it is the overwhelming yoke of romantic love that seeps into her pores and won’t let up. This occupation of James’ senses is so startlingly pleasurable that she longs for and needs it. Similarly, The Miracles’, “You’ve Really Got A Hold On Me” pronounces, “Don’t want to leave you/don’t want to stay here/don’t want to spend another day here/oh, oh, oh, I wanna sit now/I just can quit now.”

Robinson expresses the ambivalence of love and longing—frustration, disappointment, ecstasy and desire—that crowds the senses with the sheer torture of being powerless over this structure of feeling. The protagonist is unable to shake hold of the beloved object, which makes him question his own capacity.

The “hold” becomes embodied and acts out in ways the mind cannot comprehend or prevent. It is the same hold the castles have on many African American visitors—an enigmatic narrative of love, loss and longing that the progeny of slaves refuse to relinquish and attempt to retell by inserting their bodies into slave histories. African Americans tour the castles as a way of tracing what Ralph Ellison calls “the grooves of history” in Invisible Man (443). Like a phonograph record, grooves are meant to be linear and progressive, but diasporic African history is awkward, uneven and full of odd ruptures, gaps and distortions. As James Clifford insists in “Diasporas,” “Diaspora discourse articulates, or bends together, both roots and routes” (251).  These grooves consist of a series of complex and overlapping relationships that are multi-directional and non-linear. Like an album record, the records of history indicate particular events of static (crisis), interludes (junctures), and rhythms (discourse).

“The music is mysteriously ‘in’ these physical recesses, pressed into the vinyl,” Steven Feld argues in Music Grooves: Essays and Dialogues, “and listeners may imagine journeying there to merge right ‘into the groove’” (111).  Grooves are doubly intentioned as: 1) the tracing of deep historical roots through specific routes of migration and 2) a physical and/or psychic space where utopic possibilities are imagined, alternative choices can be sought out, and past and future events are persistently contextualized within the present moment. To be “in a groove” is to be in tune with multiple realities simultaneously, to compress or stretch out time and space and one’s capacity in extraordinary ways.

Strangely, this cell is absent of all sound, even the static, white noise of silence. But it refuses to sound for me and tell me its history. I hear nothingness in the emptied hole. All that remains is a heavy vastness of what once was. As Mackey so profoundly articulates, “I wept for the notion of kin, as though the very idea were an occasion for tears, a pitiful claim to connection, a bleeding socket whose eye’d been plucked out” (21).

Over time, the cold stone has absorbed the blood, sweat, feces and bones of its inhabitants. It is the only material trace that proves the enslaved were once there.

Sionne R. Neely received her Ph.D. in August 2010 in American Studies & Ethnicity from the University of Southern California. Her dissertation examines how music artists in Ghana create transnational work alliances in response to shifting political regimes under independence, from Kwame Nkrumah’s administration to the present. Since 2005, Dr. Neely has recorded and archived more than 150 interviews with creative artists and industry professionals based in Ghana. In 2010, Dr. Neely co-founded ACCRA [dot] ALT, a cultural organization that promotes the alternative work of emerging Ghanaian artists through innovative programming and international exchange with artists worldwide. In 2011, she co-produced the Accra homecoming concert and documentary film for hip hop artist Blitz the Ambassador and Afro-Pean soul duo, Les Nubians. She is co-producer of Gbaa Mi Sané (Talk To Me), a short documentary film that explores the creative process of young visionary artists in Ghana (to be released in Summer 2013). Dr. Neely will also publish an article on hip hop practices in Ghana in the forthcoming Cambridge Companion Series (Fall 2013).

Tags: ", "'I Hear You With My Eyes'; or, "Stories of the Return: Pilgrimage and Its Aftermaths", African Voices of the Atlantic Slave Trade, and the "Vulgar" Body of Jamaican Popular Culture, Anne Bailey, “Something's Got A Hold On Me”, “You’ve Really Got A Hold On Me”, Bedouin Hornbook, Carolyn Cooper, Diasporas, Elmina, Etta James, Gender, Ghana, Gil Scott-Heron, Invisible Man, James Clifford, Lose Your Mother: A Journey Along the Atlantic Slave Route, Music Grooves: Essays and Dialogues, Nancy Frey, Nathaniel Mackey, Noises In the Blood: Orality, Ralph Ellison, Rev. James Cleveland, Saidiya Hartman, Sionne Neely, Slavoj Žižek, Steven Feld, The Door of No Return, The Invisible Master, The Miracles’, Tourism, Twin Castles

11 responses to “Something’s Got a Hold on Me: ‘Lingering Whispers’ of the Atlantic Slave Trade in Ghana”