Welcome to week four of  our February Forum on “Sonic Borders,”  a collaboration with the IASPM-US blog in connection with this year’s IASPM-US conference on Liminality and Borderlands, held in Austin, Texas from February 28 to March 3, 2013.  The “Sonic Borders” forum is a Virtual Roundtable cross-blog entity that will feature six Sounding Out! writers posting on Mondays through February 25, and four writers from IASPM-US, posting on Wednesdays starting February 6th and ending February 27th.  For an encore of weeks one through three of the forum, click here. And now, Tavia Nyong’o reviews Courtesy the Artist’s The Meeting, courtesy of Sounding Out! –JSA

Last October 2012, in tandem with the New York launch of the retrospective art show Now Dig This! Art and Black Los Angeles 1960-1980,  curated by Kellie Jones and running through March 11, 2013, MoMA PS 1 invited the sounds and images of Black Power into their courtyard Performance Dome for a Sunday afternoon collaborative arts project called The Meeting curated by Courtesy the Artists. Courtesy the Artists is the collaboration of Malik Gaines and Alexandro Segade:  two-thirds of the core members of the L.A.-based performance art collective My Barbarian (the third is Jade Gordon). For The Meeting, recently transplanted New Yorkers Gaines and Seagade opted to curate a gathering of local artists, dancers and musicians they wanted to get to know better, such as LaTasha Diggs, niv Acosta, and Samita Sinha.

Curation as collaboration was the ethos behind The Meeting in PS1; Gaines and Segade were much more than masters of ceremony, but performed alongside the artists and musicians they invited. At times The Meeting felt more like a jam session than anything else, following the improvisatory and ensemblic ethos of experimental jazz. Performance piece as musician’s jam was indeed a fitting form, given that the afternoon was built around Seize the Time, a 1969 album of agit-prop cabaret recorded by activist, musician, and erstwhile Black Panther leader, Elaine Brown.

Each participant in The Meeting was invited to respond, in their chosen art form to a song from Brown’s album or another aspect of her legacy that moved them. And move them it did. If music held the event together — from Charles Gaines on the piano and drums to Matana Roberts on a haunting saxophone solo to Geo Wyeth closing down the evening with an astonishing version of  “Seize the Time” intermixed with “Age of Aquarius” from the musical Hair — poetry, polemic, video, and dance sent it spinning off into a dozen scintillating tangents.

What those intersecting and diverging responses to Brown’s album shared was a concern with how the past resonates in the present, how a historical call might not always be muted over time, but sometimes amplified by its repetition across time. Given the predominance of the visual in contemporary culture — nowhere more glaring, perhaps, than in institutions devoted to visual art — what do we make of the role of the aural as a medium through which to register the reverberations of a past? The Meeting was held in a temporary structure, literally vestibular to the permanent edifice of the museum. Is the ear a similar vestibule to the institutions of culture, and, if it is, then wherein might the power of that vestibular flesh, as Hortense Spillers once named it, lie?

On Seize the Time, the mercurial Brown transposed the black revolutionary urgency of the 1960s into a musical idiom that sounded remarkable even in its day. It is slightly bemusing to settle into the jazzy opening of the title track  “Seize the Time” with the knowledge that Marvin Gaye’s What’s Going On and Curtis Mayfield’s Super Fly were just around the corner. Certainly, despite their shared sonic defiance of American racism, Brown’s didactic sprechegesang would never be mistaken for Nina Simone’s soulful alto. Closer to the sonic mark would be singer-songwriters like Carole King, Janis Ian and Joni Mitchell, artists who broke the mold for women in pop in the late 1960s and early 1970s. Consider the rhetorical and musical twists and turns of the first verse of “The End of Silence,” a song that manages equal parts women’s liberation and black nationalism without ever teetering into blaxploitation supervixen territory:

Have you ever stood
In the darkness of night
Screaming silently you’re a man?
Have you ever hoped
That the time would come
When your voice could be heard
In the noonday sun?
Have you waited so long
Till your unheard song
Has stripped away your very soul?
Then believe it my friend
That the silence can end
We’ll just have to get guns and be men.

If The Meeting was a response to the call of that final line, it was one in which the shift from a single voice with backing band to a range of voices and positions was always audible. Some might call this postmodern fragmentation: dance choreographed to a repeating sample of Brown singing “freedom back,” a version of the album edited down to just the sequential instances of her singing the word “man,” played to projected images of every gun in the Panther arsenal she lists in her book. But these interventions arguably only expand our audition of the original album’s possibilities. More than 30 years on, The Meeting took advantage of Seize The Time’s musico-political incongruity to prise open new lines of affiliation between the past and our revanchist present.  The question continuously hung in the air: How do we occupy our radical black and feminist legacies, especially given the fact that we cannot simply repeat those struggles in identical terms? How do we get freedom back? 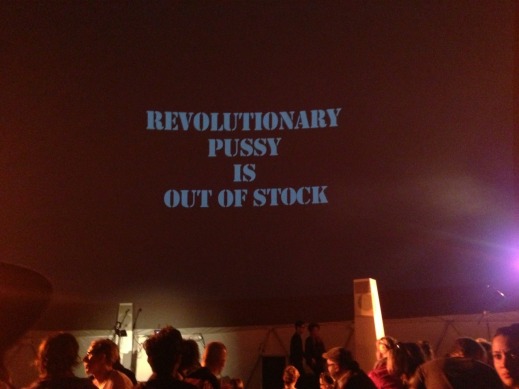 The Meeting courtesy of http://blackcontemporaryart.tumblr.com/

The declamatory cadences of black rhetoric were as central to the way The Meeting sounded as was its music. LaTasha Diggs’s barnburning performances stopped the show to inform us that revolutionary pussy was out of stock. With Charles Gaines on drums and Matana Roberts on sax, Malik Gaines scatted excerpts from President Obama’s “race speech” while excerpts from speeches Elaine Brown had given to the Panthers were read. Since the context of Obama’s speech had been his own attempt to surrogate the justified anger of the Black Power generation with a message of reconciliation, re-mixing it in this context meant it no longer had the privilege of temporal succession over Brown, but black feminist rhetoric and the improvisatory sax could invaginate his rhetoric with an eternal recurrence of radical insurgence.

It is important to note the predominantly queer and trans performance modalities through which the Meeting posed–if not fully answered–its questions regarding freedom in a contemporary context. Brown’s refrain “we’ll just have to get guns and be men” took on a new connotation when juxtaposed against the queer and trans bodies and voices in performance.

Here history revealed itself as palimpsest: images and icons were superimposed one upon the other to create dense, freighted symbols of masculinity and femininity. In a refrain originally meant to rally radical black women towards the community leadership roles tendentiously claimed by men, the gun was much more than a ‘phallic symbol.’ As Kara Keeling recounts in The Witch’s Flight (an important book containing a shrewd analysis of Seize the Time):

The appearance of the [Black Panther Party] allowed for the recognition of the black man in the Black. But this need not be understood as precluding black “females” from appearing in blacks with guns, nor does it necessarily indicate an inherent connection between “men” and “males.” What is perhaps most innovative about the BPP’s cinematic appearance is that it threw into doubt the validity of the common sense that linked “man” with “male” with “masculine” (85).

For Keeling, the innovative disruption of white supremacist racist sense — congealed in stereotypical images of black men and black women — set the stage, formed the backing track, for the historical emergence of queer and transmasculinities. 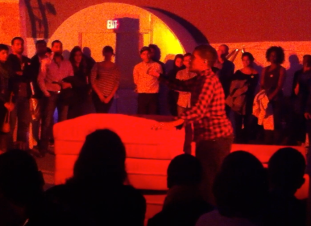 Transgender dancer and choreographer niv Acosta rhythmically ran his body against the cushioned seating of the performance dome, to the rhythmic sampling of “freedom back.” The phrase was curiously ambiguous: what actual historical freedom could Brown have possibly exhorted the panthers to claim? What imagined freedom do we think we can reclaim via our remixing of Black Power? The power of Acosta’s performance was to embody that question as a lived and livable improvisation. 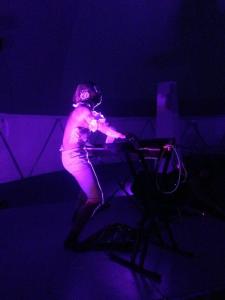 The degree to which a musical legacy such as Brown’s can or should be appropriated beyond a black context was also pointedly staged that afternoon, perhaps most self-consciously by Alex Segade’s rendition of “The Meeting” — which Brown once called the Party’s anthem — in Spanish. Segade’s version captured the melodrama and romantic longing, staging the historical interconnections between black and brown power in California as a hall of mirrors and fleeting glances.

Geo Wyeth brought the house down with a funky final number that had the audience on the edge of their seats, perhaps awaiting the promised nudity a sign at the entrance warned the performance would contain. Wyeth’s onstage costume changes were anything but a striptease, however, as he instead fused the militancy of Seize the Time  with the sexual revolution of Hair in an incompossible auditory portrait of the legacy of “the Sixties.” His performance left the audience with the emphatic reminder that it is less his generation’s challenge to prove adequate to the past than it is to retrieve from history’s shroud the pulsating star of their own desires.

Featured Image of Jarrod Kentrell performing to Elaine Brown’s “Very Black Man” at The Meeting, Courtesy of the author

Tavia Nyong’o is Associate Professor of Performance Studies at New York University, where he writes, researches and teaches critical black studies, queer studies, cultural theory, and cultural history. His first book, The Amalgamation Waltz: Race, Performance, and the Ruses of Memory (Minnesota, 2009), won the Errol Hill Award for best book in African American theatre and performance studies. Nyong’o has published articles on punk, disco, viral media, the African diaspora, film, and performance art in venues such as Radical History Review, Criticism, TDR: The Journal of Performance Studies, Women & Performance: A Journal of Feminist Theory, Women Studies Quarterly, The Nation, and n+1. He is co-editor of the journal Social Text.