SANDRA BLAND: #SayHerName Loud or Not at All

It is customary that whenever I go to my Nana’s house I turn the car speakers as low as possible. She has super hearing. Sometimes I forget, and the following conversation takes place:

“I heard you before you got the house, girl. I told you about playing your music too loud.”

“I heard you before I saw you.”

“Don’t bring attention to yourself.”

Don’t bring attention to yourself. 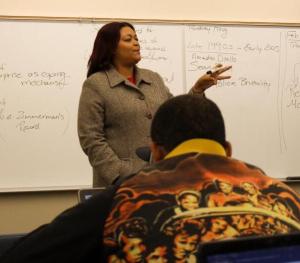 Picture from The Feminist Wire.

Physically this is impossible. I am a black woman over six feet tall. My laugh sounds like an exploding mouse. I squeak loudly and speak quickly when I get excited. I like knock in my trunk and bass in my music. Don’t bring attention to yourself. I frequently heard this warning as a girl and well into my adult life. I rarely take it as a slight on my grandmother’s account – though she is the master of throwing parasol shade. She spoke to me with a quiet urgency in her warning. In the wake of the murders of Jordan Davis, Sandra Bland, and other black lives that vigilantes and mainstream media deemed irrelevant, I understand her warning better from the perspective of sound.

As a loud, squeaky black woman I am especially attuned to how my sonic footprint plays into how I live and if I should die. As a black woman, the bulk of my threat is associated with my loudness. My blackness sonically and culturally codes me as threatening due to the volume of my voice. This is amplified, as a southern black woman. I exist and dare to thrive in a country that historically and socially tries to deflate my agency and urgency. The clarity of my sentiments, the establishment of my frustration, and the worth of my social and cultural interventions are connected to how others hear my voice. It is not what I say but how I say it. 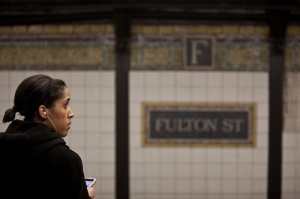 A woman waits at the Fulton Street subway stop in New York City on February 20, 2010.

Black women navigate multiple codes of sonic respectability on a daily basis. Their sonic presence is seldom recognized as acceptable by society. Classrooms, homesites, corporate spaces, kitchen tables, and social media require a different tone and volume level in order to gain access and establish one’s credibility. Like other facets of their existence, the way(s) black women are expected to sound in public and private spaces is blurry. What connects these spaces together is a patriarchal and racially condescending paradigm of black women’s believed inferiority. A black women’s successful assimilation into American society is grounded in her ability to master varying degrees of quiet and silence. For black women, any type of disruptive pushback against cultural norms is largely sonic in nature. A grunt, shout, sigh, or sucking teeth instigates some type of resistance. Toning these sonic forms of pushback—basically, silencing themselves—is seen as the way to assimilate into mainstream American society.

In what follows I look at the tape of Sandra Bland’s arrest from this past summer to consider what happens when black women speak up and speak out, when they dare to be heard. As the #SayherName movement attests, black women cannot express sonically major and minor touchstones of black womanhood – joy, pleasure, anger, grief – without being deemed threatening. These sonic expressions force awareness of the complexity of black women’s experiences. In the case of Sandra Bland, I posit that the video of her arrest is not a video of her disrespecting authority but rather shows her sonic response to officer Brian Encinia’s inferred authority as a police officer. I read her loud and open interrogation of Encinia’s actions as an example of what I deem sonic disrespectability: the use of sound and volume to contest oppression in the shape of dictating how black women should or should not act.

The sonic altercation in the video (see full-length version here) sets the stage for Encinia’s physical reprimand of Bland, a college graduate from Prairie View A&M who hailed from Chicago. Bland is not physically threatening—i.e. she emphatically states she’s wearing a maxi dress—but her escalating voice startles and even intimidates Encinia. Bland is angry and frustrated at Encinia’s refusal and to answer her questions about why she was pulled over. Encinia’s responses to Bland’s sonic hostility are telling of his inability to recognize and cope with her anger. In fact, he refuses to answer her questions, and she repeats them over and over again while he barks orders. Encinia states later in the dashboard camera that Bland kicks him and thus forces him to physically restrain her. However, Bland’s vocal assertion of her agency is more jarring than her physical response to Encinia’s misuse of power.

The dashboard camera footage is indicative of their vocal sparring match. Encinia’s voice starts calm and even. He explains to Bland he pulled her over for failure to indicate a lane change. Bland’s responses are initially low and nearly inaudible. However, after Encinia asks Bland if she is “okay,” her responses are much louder.  She does not just follow orders but expresses her displeasure in sonic ways, while she stays in the car. His tone shifts when Bland refuses to extinguish her cigarette. Encinia then threatens to pull her out of the car for disobedience. He begins to yell at her. Bland then voices her pleasure in taking Encinia and his complaint to court. “Let’s take this to court. . .I can’t wait! Ooooh I can’t wait!” Bland’s pleasure in taking Encinia to court is an expression of her belief in her own agency. The act of voicing that pleasure is particularly striking because it challenges an understanding of courts and the justice system as hyperwhite and incapable of recognizing her need for justice. Her voice is clear, loud, and recognizably angry. 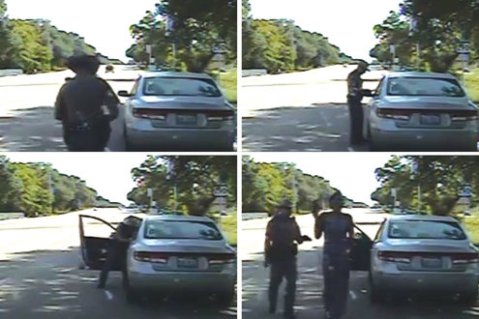 Picture from The New York Times

Her voice crescendos throughout the video, signifying her growing anxiety, tension at the situation, and anger for being under arrest. However, Bland’s voice begins to crack. Her sighs and grunts signify upon her disapproval of Encinia’s treatment of her physical body and rights. Once handcuffed, Bland’s voice is very high-pitched and pained, a sonic signifier of submission and Encinia’s re-affirmation of authority. She then is quiet and a conversation between Encinia and another officer is heard across the footage.

Many critiques of Bland center around her ‘distasteful’ use of language. One critic in particular described the altercation as “an African American woman had too much mouth with the wrong person and at the wrong time.” The assumption in those critiques is that she was not properly angry. Instead of a blind obedience of Enicnia’s inferred authority (read: superiority), she questions him and his inability to justify his actions. Sandra Bland’s sonic dis-respectability (dare I say, ratchet), is a direct pushback against the cultural and social norms of not only rural Southern society but the mainstream American (inferred) belief of southern black folks’ blind respectability of white authority and law enforcement.

Although Bland was a graduate of a southern HBCU, I do not want to assume that Bland possessed the social sensibilities that upheld this unstated social practice of blindly obeying white authority. Her death runs parallel to those of Emmett Till and Mary Turner. The circumstances of Till’s death swirled around his alleged whistling at a white woman – read as a sonic signifier of Till’s black masculine sexuality instead of boyhood – and disregard for white femininity, a protected asset of white men’s authority. Till, from Illinois like Bland, allegedly ignored his cousins’ warnings about the ‘proper protocol’ of interacting with white folks. Mary Turner, a black woman from Valdosta, Georgia, spoke out publicly against the lynching of her husband in 1918. She and her unborn child were also lynched in response to her sonic audacity. Before her death, members of the mob cut open her belly and her unborn baby fell on the ground; it was stomped to death after it gave out a cry. Turner’s voice disrupted white supremacy. Her baby’s lone cry re-emphasized it. Sound grounds much of the racial and gendered violence in the South. 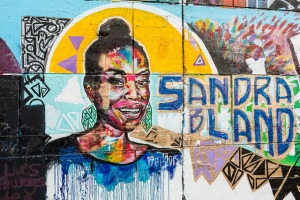 The Southern U.S. emphasizes listening practices as part of social norms and cultural traditions. Listening was an act of survival more so than vocalizing the challenges facing black folks. (Jennifer Stoever’s upcoming book on the sonic color line addresses how advertisements for runaway slaves, for example, mentioned whether they were good listeners, as a way to codify whether they were compliant slaves.). Consider my grandmother’s warning about not bringing attention to myself. In her eyes, by not bringing attention to myself I’m able to remain invisible enough to successfully navigate society’s expectations of my blackness and my womanhood. Silence and listening are tools of survival. Contrarily, Bland’s loud disapproval and emphatic use of curse words registered her blackness and womanhood as threatening. She was coded as less feminine and therefore threatening because of her direct verbal confrontation with Encinia. She was not quiet or polite, especially in the south where quiet is the ultimate and sole form of women’s politeness and respectability. The combination of these multiple representations of black women’s anger invoked Encinia’s hyper-authoritative response to regain control of the situation.

Black folks are increasingly pushing back against “being in their place.” Sandra Bland’s death is rooted in an unnecessarily escalated fear of black women literally speaking their truth to power. In a moment where black women are speaking on multiple wavelengths and levels of volume, it is imperative to single out instances and then implode outdated cultural and social practices of listening.

Regina Bradley  is a writer, scholar, and researcher of African American Life and Culture. She is a recipient of the Nasir Jones HipHop Fellowship at Harvard University (Spring 2016) and an Assistant Professor of African American Literature at Armstrong State University. Dr. Bradley’s expertise and research interests include hip hop culture, race and the contemporary U.S. South, and sound studies. Dr. Bradley’s current book project, Chronicling Stankonia: Recognizing America’s Hip Hop South (under contract, UNC Press), explores how hip hop (with emphasis on the southern hip hop duo Outkast) and popular culture update conversations about the American South to include the post-Civil Rights era. Also known as Red Clay Scholar, a nod to her Georgia upbringing, Regina maintains a critically acclaimed blog and personal website – http://www.redclayscholar.com. She is a regular writer for Sounding Out!

I Been On: BaddieBey and Beyoncé’s Sonic Masculinity — Regina Bradley

“President Obama: All Over But the Shouting?” — Jennifer Stoever